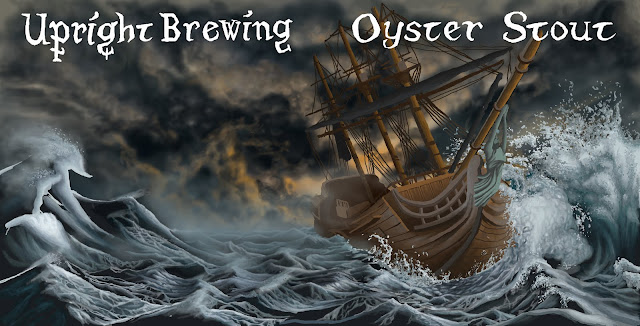 Oysters and stouts are a well-known and appreciated combo. But few people have heard of Oyster Stout. As in, making a stout with the oysters already added.
I first heard of this style about 4 or 5 years ago and have been seeking them out and encouraging people to brew one ever since. Not sure why I have not gotten around to homebrewing one yet.
I was very heartened to learn that both Magnolia Brewing and 21st Ammendment both brewed one in 2008. Later I found out both Dogfish Head and Rogue had done one, but those are long gone.

It was not until Upright Brewing and Jason McAdam (ex-Roots head brewer) decided to make one together at Upright that I learned how many people have never heard of the style and the reluctance people have to try one. As we were making the beer, we sort of live tweeted it from the Upright twitter account. Here are a few of the responses:

“Is this a test to see if we’re paying attention?”

“Oysters, as in the mollusc?”

“I am skeptical, but hope for the best re:oysterbeer. If anyone can make_that_palatable…….”

“I’m struggling a little with the oyster beer concept. Maybe you could jump on the coffee porter or coffee stout band-wagon.?”

Now it seems like this style is seeing a mini resurgence. I think with breweries like Dogfish Head constantly trying unique ingredients, it has opened up peoples’ palates and ideas about beers and what they can be. I really hope we continue seeing more of them.

In addition to Upright’s, I know of 3 brand new Oyster Stouts: The Murky Pearl from Ft. George just up in Astoria, one from Flying Fish in New Jersey and now one from Harpoon Brewery out of Boston.

They are not easy to get ahold of, but everyone from Sam Adams, Rogue, Dogfish Head and more has brewed them. 3 Brothers in New Zealand, Marston’s from the UK, Iwate Kura Oyster Stout from Japan, Barilla Bay Oyster Stout from Australia are just a few examples of foreign versions.These beers are not as rare as you think!
(Click here to read more about Harpoon’s Oyster Stout)

History:
Now that I have this blog and there is a resurgence of the style, it is a perfect excuse for me to really delve into the history and techniques of brewing these beers. 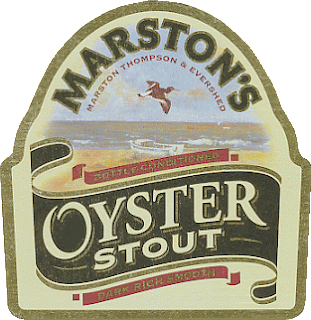 Let’s start with late, great beer writer Michael Jackson’s notes. He seems to have had the exact same reaction as I — “Despite my never having sampled the stuff, I shall be taking every opportunity to raise the question of oyster stout during the next few weeks.”
MJ also mentions that the entire idea of oysters being brewed into stouts may be a myth originating in the pairing of the two separately. Colchester Brewing Company apparently produced an Oyster Feast Stout to celebrate the annual oyster harvest taking place on the River Coine. This was possibly just a regular stout simply named for the occasion, and possibly started the myth. If not, it is the first Oyster Stout on record. It was still produced when Inde Coope and Allsopp took them over in 1925 and was produced under Romford Brewery until at least 1940, according to Michael Ripley of the Brewers’ Society. Regardless, the style became a reality if it was not already. I actually rather like the idea that the whole thing originated from a myth to reality.

Research also suggests that oyster shells were used as finings at one time. This history was not known to me until Jason McAdam suggested it at Upright and MJ’s writings confirm it. Fining agents are used by breweries to clarify their beer without filtering; they generally include positively charged agents, which are attracted to and latch onto negatively charged particles in the beer and thus sink them to the bottom of a fermentor at an accelerated pace. Oyster shells are very alkaline and work as an antacid that can counterract the sourness of a beer.

According to Wikipedia, the first known Oyster Stout was produced in 1929 in New Zealand. But they dont back this up with any info, such as the brewery name. There is evidence that there was an oyster extract produced in NZ at this time that was suggested for use in brewing that was said to improve head retention of a beer “without a trace of fishiness”.It was experimented with in 1938 at Hammerton Brewery of Stockland, London in their oatmeal stout, adding it at the priming stage of the beer in amounts of 1 or 2%. Apparently because of a bad batch of the extract, this beer never actually made it to the market.

J. J. Young of Portsmouth brewing later took up the task and produced perhaps the second on record.It was continued thereafter by different breweries until probably the 1960s. Marston’s Oyster Stout is the most widely produced beer carrying the name. Unfortunately, this beer carries the word ‘Oyster’ only in name. None are used in the making of this stout.


Process:
There seem to be two ways of thinking when it comes to brewing oyster stouts. Either you brew a Sweet Stout or a Dry Irish Stout as the base beer. History seems to suggest either was the base beer. Then, of course, there is the question of how to add the oysters.
Historically, as mentioned above, there was an oyster extract you could use. These days, the oysters are often added in either the mash or the boil. Sometimes just the shell or just the meat, sometimes both.

Magnolia Brewing in San Franciso is a veteran producer of the style, and I recently spoke to head brewer Dave Mclean on brewing the beer:

“We started out using just the shells, like some other brewers do. But, by the second batch we were adding whole oysters to the boil and letting them open, spilling the liquor into the wort and cooking the meat a bit, too. We were using a bushel (10 dozen) local Hog Island Sweetwaters, but this last batch we upped it to two bushels (though we opened and ate quite a few during the boil, too). I really like the subtle brininess that the oysters add to the stout. As a base, we use a fairly dry stout, around 6% abv.”

Ft. George added the oysters to the hopback. It’s the first I have heard of doing it that way, and seems like it would add very little. When I tried the beer it tasted like a great dry stout, but I picked up absolutely zero oyster character.
Upright combined many methods of getting the oyster character into the beer. 8 dozen whole oysters were boiled in the kettle, in addition to adding oyster juice at the end of the boil and conditioning it with cleaned oyster shells. Even then, the beer does not have a strong oyster character, but more of a subtle brininess and some added body. I don’t think anyone could pick out the oysters if you did not clue them in.
Reportedly, if you boil in the meat of the oysters, they will actually completely dissolve into the wort.There is also a common myth that oysters will kill the head on a beer. Not so in my experience.
I am looking forward to seeing more Oyster Stouts and perhaps more meat beers in general, with the advent of bacon beer experiments. Magnolia is tinkering with a Prosciutto beer, and you may be seeing something from Upright along those lines soon…