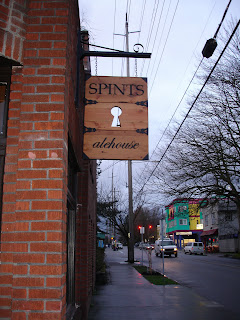 Spints Alehouse recently opened on the new “3 Corners of Beer”, just off NE 28th and Glisan in an old leather shop. That may sound bad, but the space is great, and you would never know it was ever anything but a restaurant/bar. The decor is very warm and inviting – dimly lit with candles and beautiful mahogany tables and bar. I am going to attempt a review of Spints, keeping in mind I am no food critic or Cooking Asshole.

Spints is an alehouse featuring Northern European cuisine and eclectic blend of local and regional beers. In addition, our cocktail menu focuses on local distillers along with in-house craftsmanship. I will be acting as both owner and executive chef.

The cuisine’s main focus is on traditional German food, but has some influence from Belgium and Northern France to add some lighter fare. Overseeing the management of the bar is Ted Charak, formerly of Teardrop Lounge.

Grub:
True to the description, Spints offeres a weekly ‘Dirty Pretzel’ special. On my most recent trip, the pretzel was topped with chili, cheese, sour cream and cilantro. Previous Dirty Pretzels have been wrapped in house-made bacon and filled with egg. I wish I had tried that one! The chili pretzel was not bad at all, but I didnt feel was really stand-out. It was odd eating chili with a knife and fork.
I paired an Grand Teton Bitch Ceek ESB with it. Not an ideal pairing, but the breadiness of the beer went well enough with the pretzel and a little bitterness lingered to balance out the creaminess of the dish. Next time I might try it with the dry, spicy and tart Upright Six on tap ($5 a pint). 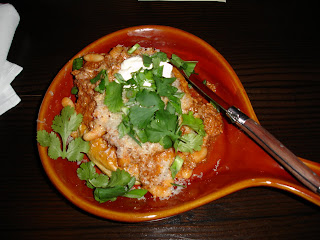 This is very tasty and hearty. It’s cooked very well, with a perfect, rising, soft and crispy crust. It tends towards letting the bread and chicken provide the flavor without leaning on spices. Very English-esque and well done.
I was in a hoppy beer mood, so I paired a Double Mountain IRA with it ($5 a pint). 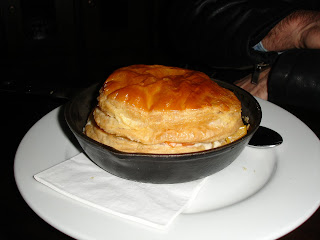 Not pictured is their excellent beef stew that is served with a honey biscuit for $7 (or $4 on the happy hour menu). I really enjoyed it, and it was quite filling for a modest portion. I loved the biscuit pairing. 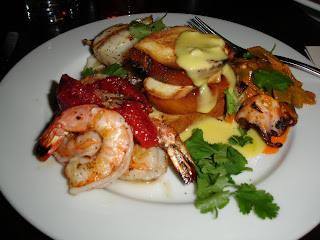 But the best thing I have had so far at Spints was their Octopus Shrimp and Steelhead mixed grill three ways, which was $17. By far the most well-seasoned of the dishes I have tried, it was served with some baked crusty bread, cilantro and a well-spiced cream sauce. The shrimp and octopus were cooked perfectly to be crispy, but not dry. Pairing a slice of the bread soaked in the sauce with seafood was an excellent combo, and this is saying a lot coming from me as I am not usually much of a seafood fan.

The dishes at Spints are also constantly changing. On my most recent visit the Octopus and Shrimp was accompanied by Pepper Coulis and Chips instead of the steelhead.

Desserts:
I have not had a chance to try any yet, but they sound very promising.

TheBlood Orange Creme Brulee ($5) has me the most interested, as I love me some creme brulee, and blood orange sounds like a pretty unique twist.

At last count they had 14 taps pouring a variety of beers, a mix of English, Belgian, German and West Coast selections. Though they have a good variety, I think they could be better chosen. For example, many of their European-style beers are actually American interpretations, like Bayern Schwarz (blah), Heater-Allen Dunkel (solid) and Fearless Scottish (weak). The local selections are Double Mountain IRA (can’t go wrong with this), Ninkasi Total Domination IPA (solid but common), Oakshire Espresso Stout (strong up and comer) and very expensive Belgians like the Duchesse de Bourgogne and Nostradamus (both $11 a pint!!).
Beers are offered in various sizes, most in 12, 16 and 20oz pours. They are a bit spendy, which has been the major complaint I’ve heard on Spints. Local beers are going for $5 a pint on average. That might fly downtown or on NW 23rd, but in this locale we are used to our $4-4.50 pints, especially for commonly-available beers like Ninkasi and Double Mountain.
If these selections don’t seem promising, Spints is slowly rotating the taps. There were about 3 new beers on my last visit.
There is also an extensive bottle list that has more imported selections like Aecht Schlenkerla Helles $8, Ommegang Hennepin, Val-Dieu Grand Cru, De Ranke XX Bitter, and more West Coast beers such as Ninkasi Believer, Lompoc C-Note, Green Flash Le Freak and Great Divide Samurai.
Most of these are overpriced as well. I don’t have something to compare the prices to in front of me, but I would say many of these are 75%-85% marked up over retail.You should expect bottles in a restaurant or bar to be at least a few bucks more then retail price, but these are going beyond that.

Happy Hour and Bar Specials:
To offset a bit higher prices Spints does have a pretty good happy hour. They offer a select beer for $3 a pint. Last time I had a Laurelwood Workhorse IPA.

There are also many small plates from their usual menu, like a cheese plate, charcuterie plate, beef stew and the Dirty Pretzel, all for about $3 less than their regular price.
I believe HH runs from 4-7, but I can’t find it posted on their website or facebook page.

Conclusion:
I hear a lot of complaints about the lack of good dining in Portland’s good beer spots. It is true that there are not a lot of options here beyond your typical pub food in most places you find good beer, the notable exception being Higgins (I am a fan of the Widmer Gasthaus as well).

Along comes Spints with great food and a respectable beer list that I think will continue to improve. Let’s keep in mind that they have only been open a short while.

If your not prepared to drop a little coin for a great meal and excellent beer, then Spints might not be the spot for you. I would certainly frequent it more often if it was a bit cheaper on the wallet.Sometimes you do have to pay a little more for quality.

On my rating scale of 0-5 I give them a 4.0 Slightly less if we took into account affordability.
If you would like to check out Spints for yourself, they have a couple cool events coming up that I would recommend checking out.

Upcoming Spints Events:
Thursday, February 11th
Weiberfastnacht “Women’s Carnival”
Spints will be letting the ladies run loose on this night with cocktail and dessert specials for the female persuasion. Men are welcome to come and try to tame the shrews.

Sunday February 14
Spints Alehouse will be hosting a 3-course prix fixe dinner on Valentine’s Day.
The dinner menu will be finalized the week prior to Valentine’s to ensure product availability. The cost is $45 per person for the food, and for an additional $25 per person each dish will be paired with a choice between a beer, wine or cocktail.
We will be reserving the seats in the dining room for the event and leave the bar open to the public for the evening.
For reservations or questions please call 503-847-2534
Menu below:
Quark Mousseline flamed oysters with a celery root bisque
——
Smoked Poussin, stuffed with ham, anchovies, olives and brioche, topped with cured lemon gremolata 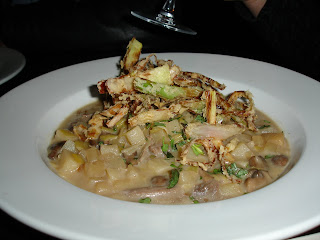 (I have no idea what this dish was. Looks good, though.)