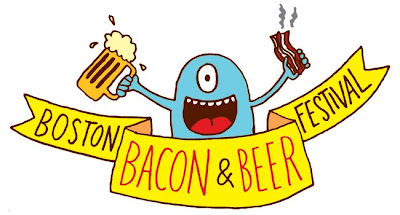 Now this is a Beer Festival I can get behind!
When I first heard about the concept of this festival I worried it would be a novelty event. It does seem like Bacon is popping up more and more in different products like candy and vodka.

But no this is no joke, the Boston Bacon & Beer Festival is truly a festival that Portland should be jealous of, perhaps the drawback of a high population of vegetarians and vegans (not that there is anything wrong with that) is lack of pairings of meats and beer. Cheese is a common pairing with Wine though we would make the argument its better with beer as our Cheese/Beer/Life column will inform you, still most people believe the opposite. The foods that are known to be paired with beer are more often things like pizza and german sausages. Both of which are pork products just like Bacon.
Let me submit that Bacon should be the true pairing with Beer and be more widely known for it, let it be the beer world’s Cheese.
Many others must be thinking the same thing as me, just take a look… 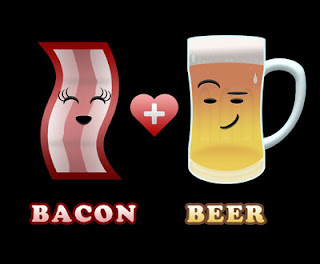 The east coast is killing us on the bacon & beer frontier.
With the impending Bacon & Beer Festival, the Bacon Explosion reported on in The New York Times and breweries now getting in on the fun.

Brooklyn Brewing has already created Reinschweinsgebot a bacon infused beer that went for $350 at a special dinner in New York. Er, so that may actually be a lose/win sort of situation.
The bacon beer was made with a technique called fat washing which involves melted meat fat added to an alcohol then chilled so that the fat becomes solid and separates from the liquid allowing it to be skimmed off and leaving only the essence of the flavor in the alcohol (I will be experimenting with this soon).
Only 21 cases of Reinschweinsgebot were made for special events only. Considering Brooklyn Brewing is one of the breweries represented at Boston’s Bacon & Beer Festival maybe this is cause for a few of those bottles to sneak out…?


The Boston Bacon and Beer Festival looks like an amazing event. Instead of promoting it as a novelty event they are taking it seriously by bringing in some of Bostons finest restaurants to prepare bacon dishes as well as an eclectic assortment of breweries present. They even are going to have pig butchery demonstrations!
Full event info for the festival below:

Together with SoWa Sundays, @eatBoston is happy to present the 2010 Boston Bacon and Beer Festival, Boston’s first food event of its kind. On Saturday, April 24 at the historic Power Station in the SoWa district of the South End, bacon themed dishes from the Boston area’s best restaurants will be paired with tasty beer from New England’s top breweries. All this in the name of a great cause! After expenses, all proceeds will benefit Community Servings, Share our Strength, South End Youth Baseball and, The Juniper Fund.
But that’s not all! There will also be live music from East Coast Soul, Boston’s premier funk and soul band, tables from local artists, and special pig butchery demonstrations featuring Chef Will Gilson from Garden at the Cellar, Vadim Akimenko from Akimenko Meats, Jamie Bissonnette from Toro / Coppa., and Jason Bond from Beacon Hill Bistro.
Here’s the Facebook event page if you want to RSVP.
If you have any questions, send an email. In the meantime, follow along on Facebook and Twitter. Special thanks to Beer Advocate and Chris Piascik for the support.
Your ticket gets you in to the event where you’re free to sample food and beer. Promise to share, ok?
If you can’t make it, you can, buy t shirts for the event here.
Here are the participants with a few more possibly TBD.

Restaurants and breweries are subject to change.
This event is 21+. If you buy tickets for a group of people, you must all enter at the same time.

Bacon and Beer on the West Coast:
I recently got to try a Bacon beer from Uncommon Brewers while in San Francisco for SF Beer Week. Unfortunately it was pretty bad not because of the Bacon but the base beer itself which was a muddled mess and had no detectable bacon.

Reportedly Front Street Alehouse/San Juan Brewing in Friday Harbor, WA brews a Bacon Pale Ale but there is little to no info on it and their website seems to be down.

Last year a valiant attempt at a Bacon and Beer fest was made in Portland at the East Burn that featured: bacon skateboards, a bacon eating contest, a bacon confessional (wtf ?), count the bacon (idiotic) and a bacon dance-off that involved “8 contestants dancing while consuming bacon. For every song you must consume a piece of bacon, or facon. The second your dance slows or becomes pathetic you are eliminated. The winner gets an ipod touch loaded with bacon apps.”
There was beer provided by Rogue and Laurelwood but this was at a bar, there was of course a bunch of regular beers on tap already.

I must say, poor attempt Portland. Really? Who wants to count bacon, dance and confess your sins?
Where is the bacon beers? A nice Rauch beer atleast. Maybe some bacon pairings?
It is time to step up our game or the latter part of this quote could become the reality:

“Either this will be the most amazingly disgusting thing you’ve ever tasted in your life. Or I shall rule the earth.”
-Garrett Oliver, Brooklyn Brewing Brewmaster 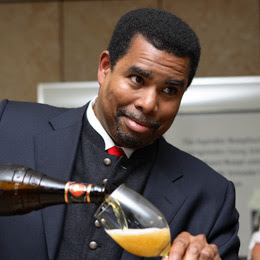 (Garrett Oliver clearly knows something we do not)