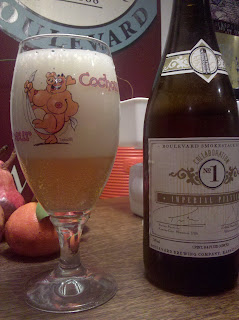 Boulevard Brewing Co. from Kansas City, MO has released the first in a series of collaboration beers. The first being a collab with Jean-Marie Rock or the legendary Orval brewing one of only 7 Trappist breweries in Belgium. Of all the people to brew with that has got to be one of the coolest and my anticipation is high for this beer.
The beer apparently only uses 4 ingredients; a single malt, water, lager yeast and only Saaz hops just like the classic original pils, Pilsner Urquell. Very traditional ingredients for a Pilsner but an Imperial Pils? Many people would say to double a Pils defeats the purpose of a Pilsner, a beer known for its light and dry drinkability. I have had a handful of Imperialized versions and mostly I would agree that they should not be Imperialized with the primary exception being Sam Adams Hallertauer Imperial Pilsner. An amazing and supremely hoppy beer.

Today we have 2 reviewers, myself and noted beer geek and Pilsner lover Mike Stender. I have known Mike for awhile now and immediately thought of him for the review because of his love of lagers. In the end we each give the beer a score of 0-5 in .5 increments.
On to the reviews… 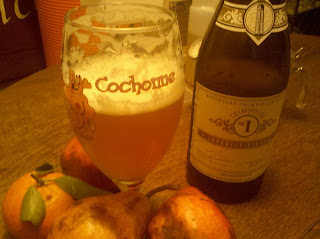 Review 1 by Samurai Artist
Fruity and spicy hop aroma, leaning towards grape and apricot aromas. Big foamy soapy white head leaving lacing. Cloudy yellow aroma with tons of bubbles clinging to the glass. Could almost mistake it for a champagne except for the slight haze and soapier foam.
Taste:
The beer has a medium body, it is light but noticeably heavier then a typical pilsner would be. Almost a nutty cereal malt flavor to it. A green and spicy hop character coats the mouth. Equal parts light bitterness and spicy german hop flavors. Finishes very clean though with little residual sweetness or bitterness. Relatively crisp for an 8% imperial pilsner.
Overall I dug it and was a nice change of pace from recent Imperial Pils I have had that tend towards being too sweet or too bitter this one does a good job at keeping the core pilsner characteristics intact. 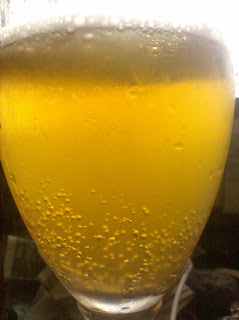 Review 2 by Mike Stender
Imperial Pilsner…oh, the cheek. Why not doppelpils or pilsbock or (as-i-believe-to-have-been-attempted) barleywine lager? There’s so many reasons this just shouldn’t happen BUT…there’s nothing wrong with the notion of a good strong dry hoplager, and this beer pretty much delivers. It has that hint of talc that a good champagne has from the conditioning, which shows that this beer is at least getting ONE thing right about the (well at least the NORTH GERMAN) pilsner style – dry and drinkworthy. It does seem to be bottle conditioned to a certain extent and if some of that conditioning takes place on some obscure store shelf at room temp, does it turn into an ale? ponder if you must… It may be a slightly unconscionable style, but it’s a great beer anyway, it may even improve for a brief bit…

M. Stender Hangs out at mainly one beer place but should probably visit more on a bike or something. Yeah, that’s the ticket…