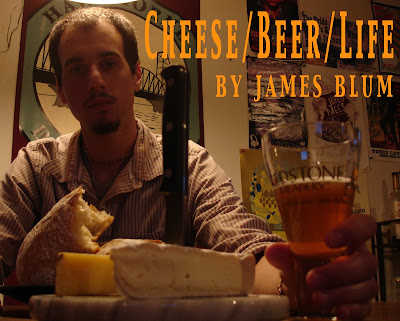 This will be my last post from the west coast, at least for the foreseeable future. My path continues to the east coast (either in Boston, MA or Nashville, TN) where I will begin graduate school in the late summer after spending a couple of months with my family in New Jersey. Since this column focuses on cheese and beer available in the Pacific Northwest, it seems that this move puts me at a crossroads as far as relevance is concerned.

It is my hope that the pairings I have explored in these posts have been helpful and inspiring. I have enjoyed pairing beer with cheese for several years now. However, writing this column has forced me to take notes and thus really pay attention to the intricate dynamics that make a good, bad or amazing match. A small handful of the pairings I explored over the last few months were truly profound; Manchego cheese with Czech Pilsners comes to mind foremost.

Most important, I hope that you, the reader, have taken the time to explore some of these pairings and, perhaps, put together a few of your own. And, to take it to another level, I hope some of you have shared your findings and experiences with friends as well as those who otherwise would not think to pair beer with cheese.

This week I don’t have any pairings to share; I’ve been eating and drinking the food and beer left in my pantry and focusing upon my move, sorry! But I have directed some thought toward the future of this column. Ezra and I have spoken about some options, which I will detail below. What I would like to do is get some feedback; in other words, leave a comment or contact me via email (jamesablum@gmail.com) to let me know what you would like to read in the coming weeks and months, if anything at all.

One option for this column would be to maintain the format, but substitute the beers and cheeses with brands and varieties available on the east coast and in the Midwest. I do make a point, week to week, to include one beer that is either an import, or a brew that is widely available, and I would do my best to continue this practice. Also, I can suggest cheeses and beers comparable to the products I am buying in my new home since I have a good grasp on the selection available in Portland.

Alternately, this column could become something of a regional microscope. To be more specific, I could write about beer and/or cheese events and releases in and around my new home. I’m not sure whether these posts would be fascinating or boring to a readership anchored in a different part of the country.

One other idea is to turn this column into a beer and cheese travel log. Perhaps, I could explore brewpubs and beer bars and look at their culture comparatively, given my tenure in the Pacific Northwest. For instance, I may look at some examples of Cascadian Dark Ales brewed outside of this region. Or, talk about the difference between prototype IPAs from the east and west coasts. Perhaps, there could be an article about restaurant attitudes concerning pairing beer with cheese outside of this pairing-friendly region.

Whatever the case may be, I will certainly miss many of the breweries and creameries from the Pacific Northwest (not to mention, some of the people as well!). In terms of the beer and culinary culture, I have never seen a place as robust and multifaceted as Portland, and by extension the Pacific Northwest. I suppose this town sometimes takes away the thrill of seeking out good beer because the stuff is so ubiquitous, but at the end of the day I’d rather drown in too much beer than go thirsty by way of beer deprivation.

So, thank you all for whatever precious moments of your life you’ve lent to the reading of my columns. If we decide to continue this column, in whatever form, it may be a few weeks before you see the next entry; sometimes, believe it or not, there are more important things than cheese and beer (I feel like I may have just made some enemies or, at least, lost some readers!).

So long and farewell, at least for now.