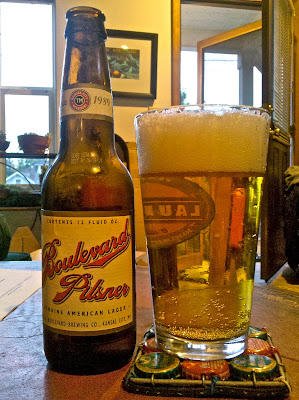 Over the last 3 days I worked my way through sample bottles I had received of newish seasonal brews in a wide range of styles. Some like Ninkasi’s Radiant I have tried before and others are brand new this year like Oakshire’s Line Dry Rye. Typically I try to get a panel of reviewers but after a few failed attempts at getting everyone together I decided to man up and drink them all myself.
The results were mixed… 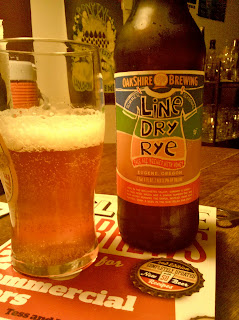 Oakshire: Line Dry Rye
Pours with a frothy white head and a hazy orangish-yellow color with many tiny bubbles. Aroma is malty cereal grains and over ripe almost tart fruit, like a fruit salad: grape, plum and peach. Mouthfeel is light and again very cereal-like grains, almost a fresh dry husk like character. Perhaps pilsner malt. There is that fruitiness again but not nearly as pronounced in flavor as aroma. In taste it is far more ethereal and is probably just from the hops. The Rye is there too and adds some body to the brew and that distinct dry rye spiciness. The beer goes down spicy and hoppy with a fairly good bitterness of a balanced pale ale that drys the mouth but is quenching at the same time. Very nice.
Score: 4 out of 5 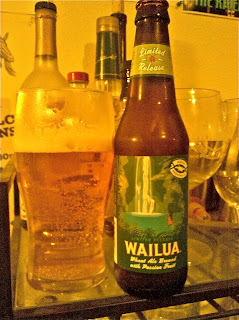 Kona: Wailua Wheat
This beer has a small white head but it does not dissipate. Looks pretty effervescent and I would have trouble differentiating it from a Budweiser in its appearance. The aroma however smells distinctly like a wheat beer and a fruit wheat beer at that. Creamy cereal and mango aromas dominate with perhaps a bit of apricot tartness. Tastes lite crisp and tart. Fruitiness dominates with more of that apricot and mango juicy flavor. The wheat is really subdued in the flavor and that makes sense considering this beer is crystal clear so clearly it is filtered out which removes much of the wheat character. And well that is pretty much it. No malt or hop edges to the beer. I do enjoy the tartness of it and could definitely drink it on a hot day but it is very one note.
Score: 2.5 out of 5 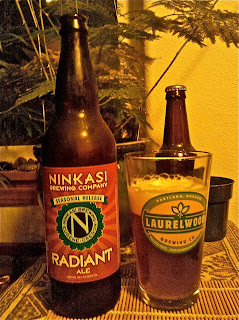 Ninkasi: Radiant
A big clingy and frothy white head greets the glass when poured. A muddy orange in color with some green highlights. This beer smells like overripe/rotting fruits and honey. Melon, banana and indistinct vegetable notes waft out of the glass.
Flavors are fruity and caramel malty up front followed by a nice dose of hops on the back end of the mouth. The hops are of a floral and bitter character. I keep wanting to say this tastes like rotting fruits but I am not sure it tastes as much like it as it smells. I find this beer to be a bit odd. If you like the smell then you might enjoy the taste. It does strike a nice balance between malt and hops and is eminently drinkable.
Score: 2.5 out of 5 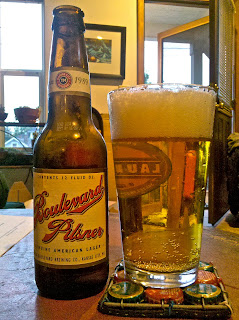 Boulevard: Pilsner
Nice 2 finger soapy head, mildly bubbly with a crystal clear yellow color. Clearly a filtered rendition of the style. Looks like a classic lawnmower lager or macro.
Aroma of bready malts and lemony hops, almost like a lemon zest.
Nice creamy but very light body with that dry toasty pilsner malt graininess and just a touch of hops. This isnt a NW Pils it is a classic Czech version of the style, or as the bottle notes, a throwback to the full flavored filtered American lagers. This would be the perfect beer to give to your PBR swilling buddy. Other then the soft lemony and spicy hops on the tongue this tastes just like an american macro lager only cranked up a notch in the flavor department and that is not an insult. Look forward to having more of these this summer.
Score: 3.5 out of 5