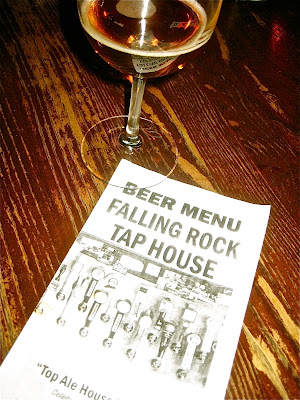 For those of you who have never attended GABF, Wednesday is the pre-game – your chance to arrive, get settled, meet up with friends, check out the local offerings and see the town before the madness of the festival overtakes you.

Boarding the flight out of PDX, my first thought was:
“If this plane goes down, we’re losing half of the Portland brewing community.” Spotted aboard were Ben Love of Hopworks, Brian Butenschoen of the Oregon Brewers Guild, Curtis Bain & Ron Gansberg of Cascade Brewing and local festival maven, Preston Weesner.
Our day found us bouncing quickly from location-to-location and sampling several DIPA’s in the process: Rock Bottom for lunch and a North Star DIPA, Great Divide for a quick tour and a glass of Hercules, and Breckenridge for dinner and their 471 IPA.
We ended the night worshipping at the beer geek temple that is Falling Rock Taphouse. Over the course of several hours, our table sampled the following: Russian River Sanctification & Supplication, Cantillon Gueze on draft, Odell Bourbon Barrel Stout (Cask), Odell Deconstruction, Lost Abbey Framboise Di Amarosa, Left Hand/Terrapin Oxymoron, Dry Dock Chase’s Grit Russian Imperial Stout and Odell’s Brett Barrel Brown Ale.
The day in pictures…