There are so many beer events in Portland, yet there never seems to be much going on major holidays. For example, Halloween, a holiday mostly that is enjoyed by kids and the occasional adult costume house party. With that in mind, I, along with cohorts the Beer Goddess Lisa Morrison and Meghan Letters, came up with the Night of the Living Ales .
Night of the Living Ales is in the simple form of a pub crawl, something that has seemed obvious for the bustling 28th Street neighborhood with all of its bars and restaurants, including the recent spurt of new breweries and taphouses. It’s a ripe street to take advantage of the close proximity of great bars. Thus NotlA was born, but not without adding a few unique flourishes to make it interesting… 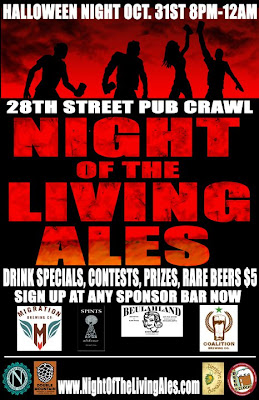 To participate in the pub crawl, all one needs to do is purchase a wristband for $5. These bands are available at any of the crawl locations (Migration, Spints, Beulahland, and Coalition) or at the event website (www.nightofthelivingales.com) via Paypal .
What do you get for the wristband? Well, the first thing needed for a pub crawl is really good beer bars that serve, of course, excellent beers. I was lucky enough that my first choices for each were all happy to participate. Each bar will tap a special draft beer from a different brewer, offer Happy Hour prices, and will host its own unique Costume Contest and Trivia with special prizes. To be eligible for all of those specials, one must purchase a wristband (which will also be available the day of the crawl).
More of a breakdown of each location and special tapping below:

The party/crawl will kick off at 8pm at Migration Brewing. Migration opened earlier this year less than a block off of 28th street on Glisan with a nice open patio beer garden and cozy indoor area with dartboards and movie nights. The brewrey will be offering prizes for the “Freakiest” costume, including a T-Shirt and a $25 gift card. In addition, they will welcome guest brewery Upright Brewing. Alex Ganum of Upright will be debuting the first very limited draft offering of a new blend of Late Harvest, a unique beer and different than the first blending. Alex describes it thus:

“The second blending of Late Harvest brings together 4 different barrels of Upright’s dark rye beer which had chocolate, long pepper and Tasmanian peppercorns added, yielding a small batch of tart and aromatic provision beer, made to cellar up to 3 years.”

From Migration the crawl moves just around the corner to Spints Alehouse, which is known for its food, wine and cocktails just as much as its craft beer selection. Spints is happy to host Double Mountain Brewery‘s Charlie Devereaux, who will be bringing in one of the last rare kegs of Bonne Idee Avec Kriek, a blend of a Saison made last spring and their popular sour Kriek cherry beer. Spints will offer this beer along with a discounted food menu and other specials for crawlers with a wristband. 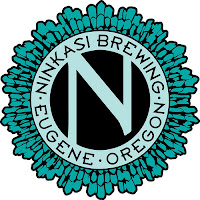 Next up is the 28th street institution Beulahland. This bar has been a longtime favorite of mine for its eclectic decor, hip dive bar atmosphere, and great beer selection. Ninkasi will be featured here with a special Oak-Aged version of their Kraken Strong Ale. As far as I know, this is the last remaining keg of this beer.

Lastly, we close out the evening at the newest kid on the block, Coalition Brewing, and a very special beer brewed by myself, a Peanut Butter Chocolate Oatmeal Stout! I am pretty stoked and nervous about this beer, as the pressure is now on for it to be good. It’s a tricky beer, but if you can pull it off it comes out phenomenal, as many friends who tried my original version will attest.
There is less than 10 gallons of this beer, so the only time you will get to try it may be as a member of the pub crawl. We’ll also close out the night with the most beer geeky contest for best Beer-Related costume with the prize being a $20 Coalition gift card.
Hope to see you out this halloween and you can follow the Night of the Living Ales on Facebook or on the Website, where you can also purchase a wristband for $5.50.