The winter beers are lining the shelves already and Ninkasi is one of the first local breweries out of the gates with their Sleigh’r billed as a Dark Doüble Alt Ale. Many people are complaining about how early the winter beers come out which I think annoys most of us but is unfortunately part of the way the distributors and stores force a brewery to do business. That is a talk for another column however as this will focus on simply judging the beer for what it is: a hybrid German, American, Hard Rock inspired Holiday ale. 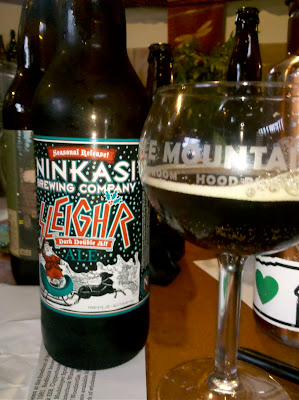 First a primer, Sleigh’r is said to be in the Altbier family of styles, Alt is a german style some describe as Germany’s amber ale, but forget all that and lets take a look at what the authorities (Brewers Association) say the style guidelines are:

Now we are not really reviewing this beer to style and it is fairly clear this is an american interpretation being their holiday ale and a double alt, not being very traditional but regardless that sort of gives you an idea what to expect in general. Now let’s take a look at Ninkasi’s actual product description for Sleigh’r that keeps it pretty vague:

A delicious northwest seasonal brewed with winter in mind. A dark double alt, malty, nourishing and delicious, it’s sure to keep the winter at bay, and yes, Sleigh’r does rock!

With those thoughts in mind I think many reviewers went into Sleigh’r expecting an over the top beer, maybe very hoppy and strong as Ninkasi is often known for but that is not what we found.

On to the reviews from 4 separate New School panelists, each rating the beer on a final score between 0-5 in .5 increments:

Review 1 by Ben Edmunds
Light brown with low head. The aroma is full of nuts, chocolate, and peppery/spicy hops. On the tongue, this is an awesomely full bodied beer with lots of dark malt character and a very hoppy, dry finish. Maybe a little chocolaty/roasty for a true alt, but this is as tasty and drinkable an American alt as I’ve ever had. Very well balanced with a near-perfect balance between the dark malts and earthy hops.
Score: 4.5 out of 5

Review 2 by SNOB Ritch
Ninkasi Sleighr pours dark amber with a lacy beige head. This double alt has a big toasted malt nose, with very little hop aroma. At first taste, I get lots of toasty and nutty malt flavor that is sweet, but not too sweet. After the initial malt flavor on the front in, I get nice hop bitterness in the finish that really balances this beer out. Overall, this beer has everything I’m looking for in winter warmer, big malt flavor without a cloying sweetness, balanced with hop bitterness, and nice smooth warming alcohol presence. I was really impressed with this beer.
Score: 4.5 out of 5

Review 3 by Samurai Artist
A supremely sweet and malty aroma with tons of dark fruit esters knocks me out from first whiff. On first sip I was expecting cloying sweetness but was instead greeted with a nice toasted malt character, creamy caramel malts for sure but not nearly as sweet as the aroma led me to believe. The beer is certainly very malty in the best sort of way for this kind of beer, deep and rich yet with a dry enough finish to not taste like dessert. Sleigh’r also has an excellent nutty and dry roasted malt character that adds some much needed depth and just a touch of hop bitterness on the end to aid in balancing it all out. This is the sort of malt forward beer I can get behind.
Score: 4 out of 5


Review 4 by LalePrincey
Does this beer rock (as Ninkasi professes)? Hell fuckin’ yeah.
The smell hits you with some’o that old roasty-toasty that you’d expect from a winter-inspired seasonal. There’s even a bit of spiciness to the nose that further points to Sleighr’s seasonal inclinations. First taste creates a pleasing warming effect–but don’t be fooled, this baby has the hop-bite you’ve come to expect out of a Ninkasi brew. And while I’m not super familiar with the Dark Double Alt style, I can say that this beer has traditional, olde-world appeal with a distinctive Northwest flair.
I say Ninkasi hits the nail on the head with this full, strong beer that’s true to its mission and with 7.2 ABV is sure to “keep the winter at bay.”
Score: 4.5 out of 5

One of these days I am going to have to compile all the scores we have given beers on The New School but until then I can confidently say Sleigh’r surprised everyone and is among the highest scored beers we have reviewed so far.
Thanks to Ninkasi for the sample review bottle.