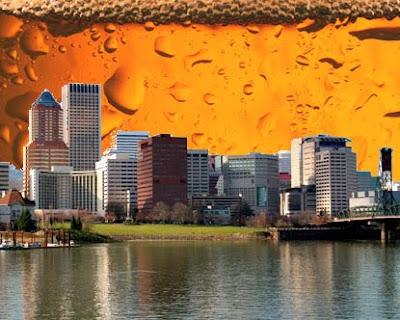 This is one of the busiest weekends for me, so much so that I am calling off work today to make sure I hit all of the cool happenings. 2 of the 3 events I am highlighting below you have probably heard about: Saraveza’s 2 year anniversary party and perhaps Art & Beer at the Portland Art Museum, but have you considered the Apple Tasting and Portland Cider Fest? Find out more about all of these events and why I think you should attend them below:

A new area of alcoholic appreciation to me, Ciders are having their biggest PDX showcase last weekend and this one the Portland Nursery Apple Tasting and the Portland Cider Festival a small part of the overall Apple Fest. The Apple Fest is a really cool event for the whole family, in Portland Nurseries huge outdoor area they have many dozens of unique incredibly flavorful apples, Cider pressing demos, Cooking with Apples demos, Apple honey samples and sales, Apple desserts like strudel and crisp, live music and an awesome free sampling of all of the various apples fresh in this season. Not to mention the booth operated by perhaps the best localish hard cidery, Wandering Aengus. According to Wandering Aengus website there is a $5 fee to taste up to 15 different ciders at 1/2 oz pours from around the country. 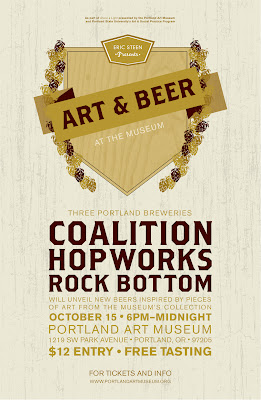 One of the more unique events in the Portland, OR beer world Shine a Light: Art & Beer is tonight Friday October 15th and would make my list for top reasons why we have one of the best and most interesting beer cultures. Despite my critique of Oregon Craft Beer Month I dont see an event as unique as pairing Beer with Art anywhere else.

Masterminded by Eric Steen of the Beer and Sci-Fi blog the event is centered around art pieces wherein the brewers from 3 local breweries: Coalition, Hopworks and Rock Bottom choose an artwork that inspires them to brew a beer essentially to be paired with the visual art. This is a great idea and is just another way of showcasing the greatest achievement and I believe the main attraction of craft beer and that is the social art of it, something that Eric understands very well as his lifes work is not any sort of physical or musical art but Social Art and its clear that these brewers got it, just listen what Van Havig, Brewmaster at Rock Bottom had to say about his beer:

“what we did was brew an American “style” pale and brew it with British method. I’m trying to get at the tension in the piece between the soft, fuzzy blues and grays which seem to be trying to contain the much more vibrant reds, ochres and whites. In other words, it’s all about vibrant, brash American brewing trying to be what it is, and our British brewing roots doing what they can to calm down our “colonial,” crass showiness.”

When I met Eric earlier in the year I found we had very similar interests, he is a social artist and I a visual artist but our love and respect for art and beer combined with the inspiration we both have taken from Tom Marioni’s series “The Act of Drinking Beer with Friends is the Highest Form of Art”.
When I lived and studied art in San Francisco I happened upon Mr. Marioni’s exhibit at SF MOMA and was immediately grabbed by simply the title and it has been in the back of my mind ever since.
Art & Beer is just one part of the larger Shine A Light event at the Portland Art Museum that is all about reinventing the gallery spaces in a new way. It’s an extremely cool event that you should read more about on the website.
And if you want to know more about the extremely unique beers made for this evening check out Brewpublic’s excellent post.

It’s hard to believe that Saraveza has only been open for 2 years. In fact I find it almost completely unbelievable. I dont think I have seen a place establish themselves so quickly in the hearts of the beer community with the possible exception of Bailey’s Taproom. It is especially shocking to me because I must admit I was skeptical when I first heard of the place, its far out location on NE Killingsworth, an owner I had never heard of, and a bewildering dedication to Wisconsin cheeseheads (Read: Packers fans).
But the place quickly won me over just like everyone else with the incredible warmth and welcome of owner Sarah Pedersen and her well selected staff of bartenders like Jonathan Carmean, Tyler Vickers and Erika Huston (among many others!) who always seem like the happiest (and friendliest) staff in town. Not to mention always keeping interesting beers flowing, changing frequently and an amazing lineup of cool events. Getting to the point, you should definitely pop in and show these guys some love this Saturday, if that werent reason enough there is tons of free shit!

To celebrate the growth of the craft beer industry and our second birthday, join the Saraveza staff all day long (11AM until midnight) as we share our love for craft beer and give thanks to those that have joined forces with us to turn the masses into craft beer drinkers! Viva la Craft Beer Revolution!