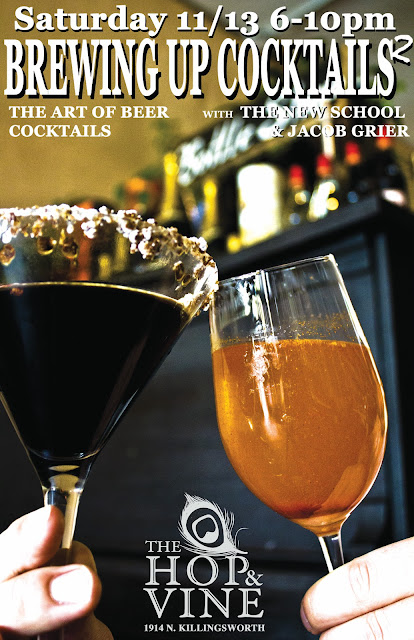 During last summer’s Oregon Craft Beer Month myself and bartender/writer/mixologist Jacob Grier, with the help of Yetta Vorobik of The Hop & Vine, put together our first Brewing up Cocktails event. We centered the event around the idea that craft beer and spirits could be combined to create cocktails as tasty and unique as either ingredient alone. The afternoon went well, and we won over quite a few non-believers. However, our event was somewhat obscured by surrounding events such as the PIB and Saraveza’s Double IPA Fest. But now, emboldened by some excellent press and critical reviews, we have created a sequel of sorts that will feature all new cocktails. These recipes are, I think, much better than those served at the first event, and more in tune with the season.

Some of the great press we have received for Brewing up Cocktails:

“Ezra Johnson-Greenoughof the New School beer blog and mixologist Jacob Griermay have found the Next Big Thing in the craft beer world, cocktails made with good beer and quality spirits and liqueurs.”
– The Oregonian

“The bartenders out in Portland, Oregon are taking advantage of their excellent craft beer scene to mix up some tempting and tasty beer concoctions!”
– The Kitchn

“The Three Brewsketeers are at it again! The first was so popular, you knew there’d be another…“
-Portland Examiner 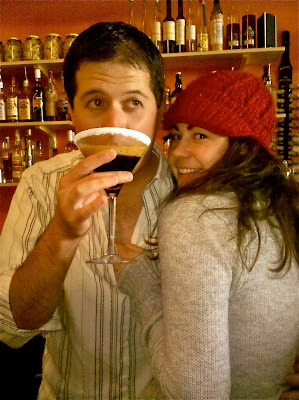 My experience coming into BuC was actually quite limited. I certainly was no beer cocktail expert, but I brought a passion for craft beer and, more importantly, a love of creating unique concoctions to the mix. Along with Jacob’s knowledge of spirits and Yetta’s more wine-like sensibilities, we sort of balanced each other out, and had a lot of fun in the process. So much fun, in fact, that Yetta suggested calling this one Sexing up Cocktails. It’s a name I quite like, and I wish I had thought of it before. Though really, cocktails are already pretty sexy, but maybe we can sex up craft beer for the rest of the uninitiated world?

Seriously, though, who can deny the sex appeal of a bourbon infused with house-smoked bacon shaken with maple syrup and Great Divide’s Oak-Aged Yeti Imperial Stout in a martini glass rimmed with sugar and ground carmelized bacon??? Clearly this invention needed a sexy name. Inspired by Brewing up Cocktails 1’s popular Furburger drink that used Chocolate Oak-Aged Yeti, we have dubbed this one Son of the Furburger! 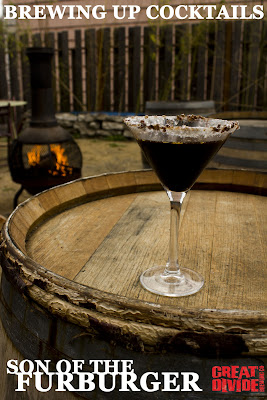 One thing we decided to differently for BuC 2 is to try to use more locally available beers and really craft the cocktails around them. In light of this objective I created a poster for every drink featuring the name as well as the logo of the brewery that we used. I’ll highlight two of them here.
BuC 1 also took place in the afternoon to take advantage of the summertime weather and H & V’s awesome patio, and the drinks reflected that. In that same vein, the drinks concocted for BuC 2 are much more fall and winter drinks to really warm you up and the event will take place in the evening.

NW WASSAIL
For our next cocktail we thought something hot would be nice for the cold fall nights we have been experiencing. Our take on a traditional German Wassail cocktail does the trick. Many beer drinkers may only be familiar with the term Wassail as Full Sail Brewing’s winter seasonal, or as the modern updated holiday cocktail that is for the most part a mulled cider with booze. But a Wassail was traditionally a hot cocktail that most often used ale or mead as a base, with ginger, cinnamon, nutmeg and sugar added.
We have taken our recipe a bit more traditionally, using Deschutes’ favorite winter ale, Jubelale, as a base beer. We slice, roast and caramelize apples, then stew them with Jubelale, spices and of course some spirits: rye whiskey and a bit of dry sherry. It is served in a mug with a lemon star floated. 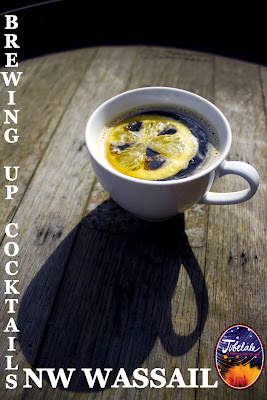 Starting next Monday I will start featuring a Beer Cocktail A Day, highlighting each of the 6 we have created for Brewing up Cocktails 2. I’ll have a more in-depth story and history of the creation of these beverages leading up to the event, Saturday November 13th 6-10pm at The Hop & Vine.