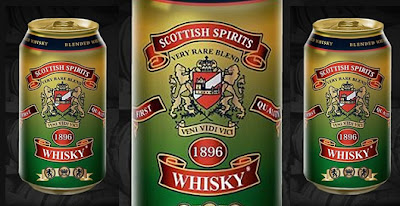 If there is one thing that was missing from cans now that we have quality beer and alcoholic energy drinks in them, it’s good Scottish Dram Whisky served in a classic 12oz aluminum package. Well, Scottish Spirits Ltd. has heard our cries!
The handsomely packaged cans are emblazoned with a regal crest and the words “Very Rare Blend.” The infamous phrase “Veni Vidi Vici,” followed by the year 1896, are also present, suggesting a premium, authentic, old world product. According to the UK Daily Mail, however, Scottish Spirits Ltd. is actually a Panama-based company that has an office in Glasgow, Scotland.

12oz of Whisky equals 8 full shots, and the can is meant to be brought to places like the park to be mixed with other beverages such as cola. But the Scotch Whisky Association is having none of it and plans to try to ban the product over concerns that it breaks international labeling rules. A spokesman for the Association says:

“We are concerned that consumers may be confused whether or not the product is real Scotch and we will be investigating the matter further.”

Come on, Scotch Whisky Association, why kill the fun for the rest of us? I really want to get a can of whisky from a vending machine in the near future, though they could never be as cool as the vending machines in China. Especially not this Live Crab one:
Hat tip to Eater