apricots beer caviar beer new burnside brewing company
Burnside Brewing Co. opened just over a month ago and has been slowly rolling out new beers, science experiments, and food specials in their ‘Fermented Hour’ with some great deals. Today, Tuesday, February 8th, they release their latest new brew, dubbed ‘Sweet Heat’. We have the details on the beer and specials.
Pictured in the headline photo above is Burnside’s latest experiment, Beer Caviar. It is a sample of 3 of their beers served side by side with an edible ‘beer caviar’ that is essentially gelatanized versions of each beer. They are soft, chewy, and slightly salty, and the flavors of each beer become somewhat more concentrated in a solid form. It is an interesting experiment that chef Ronnie Vance is still perfecting, and he hopes to add carbonation to the beer caviar soon.
‘Sweet Heat’ is a wheat beer brewed with an addition of 200 pounds of apricots, then dry-hopped with imported Jamaican Scotch Bonnet peppers. Anyone familiar with some of brewer Jason Mcadam’s pepper beers at Roots knows he understands how to integrate them well, and ‘Sweet Heat’ is based on one of my favorites: Calypso, a beer that was created mostly for the OBF many years ago.
Reminiscent of a Caribbean chutney, Sweet Heat has a subtle tartness from the fruit and a slight spiciness from the peppers, which also adds a fruitiness to the aroma.
4.9% ABV
9 IBU’s
The next new beers up for Burnside are a dry Irish-Style Stout, and, by this summer, a Berliner-Weisse. 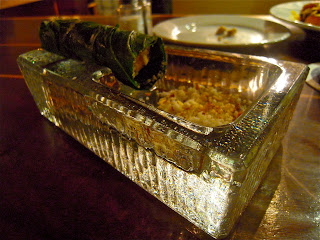 Pictured above is the ‘Cohiba’, which is Duck Confit rolled in a crispy crepe, fried, and than wrapped in collared greens. Because of the form factor, Chef Ronnie has had fun modeling it after a cigar and going so far as to buy huge 70’s looking glass ashtrays for serving each one. Instead of ash, that’s dehydrated duck fat that melts when you dip your “Cohiba” into it hot. This is just one of many new options on the Fermented Hour Menu for $6, including $3 Imperial Pints all day Wednesday and Sunday and $3.50 Imperial Pints from 3-6pm every day.
701 E Burnside
Portland, OR 97214