ben edmunds breakside brewery
Facebook Twitter Reddit SMS
Today, March 1, is my good friend Kathryn Miller’s birthday. For no real reason, we have a (now three year old) tradition of brewing a stout to commemorate her birthday. The stouts tend to be somewhat exotic to match Kati’s personality. Two years ago, we did a milk stout with chocolate and ginger; last year’s was a bourbon-barrel stout. Until this year, this has remained a small homebrew project. This year, I suggested Kati come in and join in brewing her own beer as part of the Breakside Wednesday Release Series. Kati’s Stout is one of the beers in the series that I am most excited for, as I have been increasingly interested in the viability of savory beers. This Wednesday, we are releasing a savory wheat stout, brewed with wakame seaweed, shiitake mushrooms, and miso. 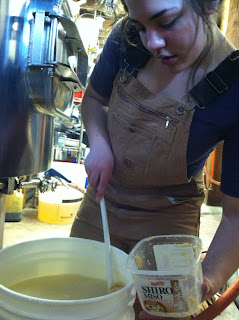 The goal in creating this beer was to brew something that was both sweet and salty: a stout with enough malt to balance an aggressive attempt to incorporate ‘umami’ flavor. Our inspirations included oyster stouts as well as Terra Saurus, a mushroom stout from Seattle’s Epic Ales. The base stout relied heavily on a mix of dark crystal malts (120L and 60L), with a more restrained use of black barley in order to rein in any roast-driven bitterness. I also saw dark crystal malts as the best counterpoint flavor-wise to the various savory ingredients we planned to add. While we added the mushrooms and seaweed during the final part of the boil, we injected an extra level of saltiness into the beer by replacing our sparge water with half-strength miso broth.
Would this create a salt bomb? Would the beer be unpalatable? Going into fermentation, the wort was pleasantly balanced: the seaweed flavor really popped with the shiitakes adding their horseradish-like aromas. Tasting the wort, at least, was not like drinking the ocean.
At Zwickelmania, we poured tasters of the unfinished, uncarbonated version of the beer, soliciting feedback from our attendees. What we were most interested to know was whether folks found the beer to be too salty. While a few tasters found the beer’s savoriness to be too much, most agreed that the saltiness and sweet malt flavors—which seemed to be defined mainly by dark fruit flavors—were in good balance. Had the feedback pointed to the beer being too salty, I had a ‘Plan B’ of re-sweetening the beer with a small amount of lactose; fortunately, we didn’t have to test that approach. 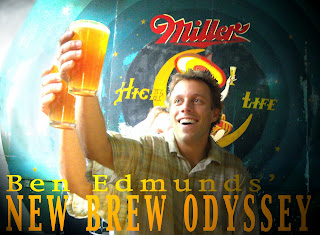 I imagine there are even some folks who will find the umami levels in the finished beer to be too tame. And for them, we have an optional addition: when we tap the beer this Wednesday, we are offering the glasses with a ‘salted rim,’ seasoned with celery salt and chopped, dried anchovies.
The beer taps Wednesday at 3 PM.
Breakside Brewery
820 Northeast Dekum Street
Portland, OR 97211
Get Directions