Behind the Pint Collaboration Interviews Video

31-25 behind the pint boulevard brewing 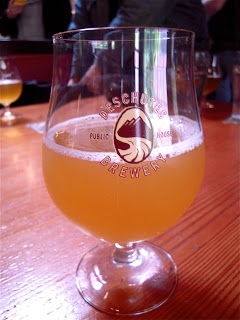 Roughly a month ago Deschutes Brewing announced work on a new collaboration beer with Missouri’s Boulevard Brewing and that the beer would be a first of its kind hybrid style “White IPA”. If your wondering what they mean by “White” IPA the idea was to combine a Belgian-Style Witbier with an IPA. Of course a Witbier is a wheat based Belgian brew typically spiced with Coriander and Orange Peel but occasionally other spices as well.

It turns out that various versions of Deschutes collaboration have been masquerading themselves at the pub for a little while now under the name 31-25. Much like they did with Hop in the Dark brewers have constantly been trying out and tweaking the beer to see what people thought and they finally have settled on their final product which we sampled the other day with both Deschutes Brewmaster Larry Sidor and Boulevard Brewmaster Steven Pauwels.
Last week we had a rare opportunity to try the White IPA alongside the brewers and I can tell you that this will be a unique beer not only for combining IPA with a Belgian-Style Wit (because it really is not all that hoppy) but because its spicing that includes Sage and Lemongrass combined with citrusy NW hops to bring out both lemon citrus and herbal flavors. It will be interesting to try each breweries version side by side here in one of the few markets they both distribute in.