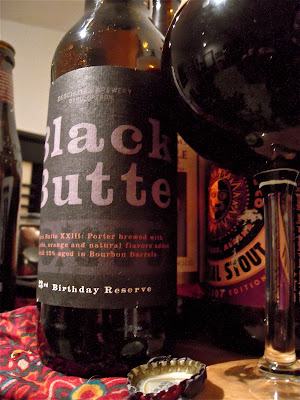 Twenty three years ago Deschutes Brewery opened its doors in Bend, OR, and just three years ago the brewery began releasing an annual special commemorative brew–an Imperialized/Double version of one of its flagship beers, Black Butte Porter. Last year’s version was famously was ruined in the bottle from the addition of a fatty chocolate that came out in globs. The draft versions snuck out and were still delicious, though the bottles were never to be found. This probably added to the hype and anticipation of this year’s third version, Black Butte XXIII, which is being billed as a perfected version of the last. Yesterday Deschutes tapped the beer at its two pubs for what was effectively an unpublicized soft release. The same day I received a sample bottle in the mail, which I review for you today. 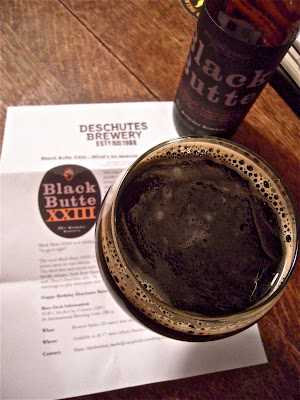 The new Deschutes Black Butte XXIII smells like dark, milky chocolate. It’s surprisingly smooth and soft for a beer so big. I detect very light roasted notes, like a chocolate ball dusted with coffee, but it smells unendingly creamy, like a soft serve chocolate ice cream.
When poured straight down the middle of the glass the beer produces only a half finger of head over the entire glassful pour, and it lingers at that size with its creamy delicious cappuccino qualities for a good minute or two before finally dissipating and leaving intricate, mysterious bubble patterns upon its inky, abyss-like color and depth. To look into this beer you would wonde,r how far does it go, what lies at the bottom of its depths?
According to my information sheet that came with the sample bottle, XXIII succeeds where XXII only attempted, with “uncanny nuances of spicy chili, orange, and chocolate in fitting tribute to a tradition of innovation and excellence.”. They also suggest the beer’s ingredients include wheat, Theo’s Chocolate nibs, Pasilla Negra chili peppers, and Sevilla oranges.
The spec sheet cleverly lists the “Beer Geek Information:”

Try as I might, most of the nuances suggested are not registering on my palate. Call me an amateur or a novice, fine, but while I can detect flavors of cocoa nibs, chocolate, bourbon, and orange, none of them really stand out as individual ingredients except the chocolate and the orange. This is not a negative thing. I can only imagine that Deschutes meant these flavors to dance around your palate reflecting themselves in unseen ways. 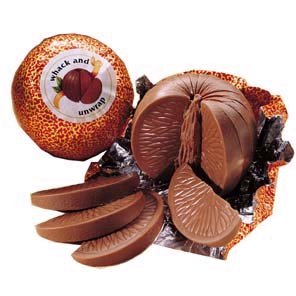 This is truly a beer that you should let sit for a good 10-15 minutes after removing it from your fridge. The depths of this beer are completely overshadowed by what I would describe as a bit too harsh of a bitter black malt base, but as it warms the sharpness softens a bit and the orange and cocoa begin to shine. The orange comes off more sweet than bitter, though it has that pithy rind bite, too, and it really begins to coat the mouth. What was at first a so-so beer warms up to me and tastes more and more like one of those orange-flavored chocolates, but with more depth. This beer becomes more juicy and more bittersweet and so much more like a balanced dessert. The alcohol behind this brew also begins to really shine with a burn on the tongue that becomes more and more apparent as you get towards the bottom of the glass. The boozines may just put me over the edge on this one, as it brings this brew closer to the category of a port wine.
In the end I think I love it, but find it not unlike an epic novel that I know will be rewarding in the end but I hesitate to dive into, knowing the work that must be put into it. I think I may file this one away into my cabinet and save it for another year. 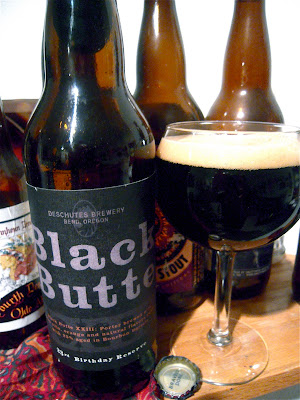