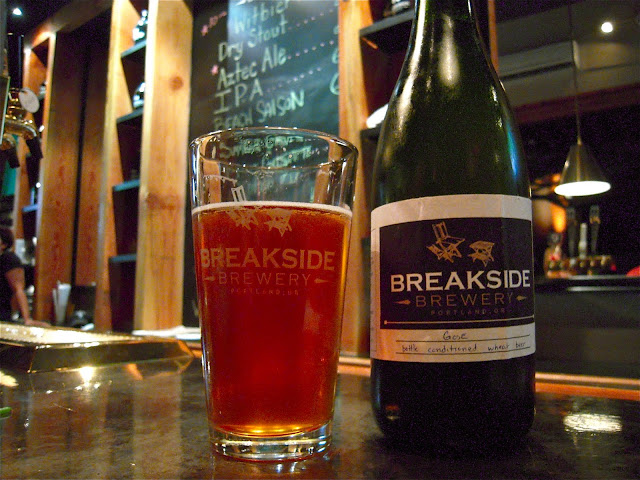 If you make your way to far North Portland you may want to stop into Breakside Brewery to see the latest beers they have concocted. You may also be surprised to find that the brewery is now bottling in very limited quantities. 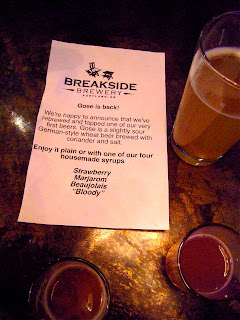 The new bottles are in the vein of Upright’s Sole Composition series, very limited and with a standard label featuring the logo and a section to handwrite in what beer it is and some basic information. Like Upright again, the quantity available of each beer is different, all the way from 3 bottles to 25 cases, and these are all packaged in 750ml green bottles. The prices also range from $8 to $15, and while most of the beers are force-carbonated, depending on the style they may be bottle conditioned, like one of the newest beers, Breakside’s updated take on a Gose.
Now Available in Bottles: Beach Saison, Gose, Margaret’s Beet Beer, French Blonde–Muscat Version.

On a recent visit Breakside had the latest version of the Gose on tap. A traditional take on thisalmost extinct style of German beer, a low ABV-wheat beer brewed with salt and coriander and a lactic fermentation. What is not traditional is the housemade syrups that Breakside’s kitchen has made to go along with the beer. A Berliner-Weisse would traditionally be served with the option of sweet syrups like Raspberry or Woodruff, but not a Gose. However, there are some similarities between the styles, so it seems Breakside feels they are appropriate here. Like Burnside Brewing, Breakside has concocted its own takes on fruit syrups, with Strawberry, Marjoram, Beaujolais, and ‘Bloody’. I tried a pint on its own, followed by samples with each of the syrups added. They all tasted pretty authentic, with the Beaujolais (a type of wine grape) being the most subtle; the others were good as well. The Strawberry indeed tasted fresh and not like a fake flavoring, the Marjoram was interesting, with a pleasant soft floral and herbal quality reminiscent of a relaxing tea, and the ‘Bloody’–as in Bloody Mary–had quite a bit of kick with extra saltiness and some good spicy heat. Though I gotta say I am not a fan of bastardizing beers by adding Bloody Mary mix, this one was tasty but felt wrong to me at the same time. It is certainly worth a try.