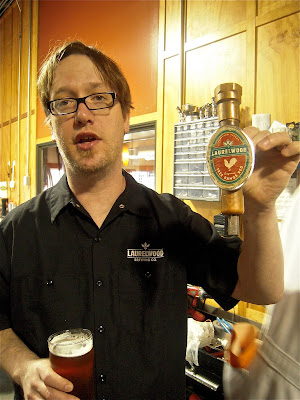 If you have not been following the latest beer news, longtime Laurelwood Brewmaster Chad Kennedy announced recently that he was leaving Laurelwood to help open a new brewery in Bend. Soon afterwards, Laurelwood announced that Vasilios Gletsos would be the new Brewmaster and will be be helping the company open a new production brewery.

As hinted at before, Chad will be working with the primary investor, attorney Roger Worthington, who owns the land for the brewery, a vacant lot on Northeast 27th street along U.S. Highway 20. Also previously hinted at, the brewery will focus on production, but also plans to operate a tasting room and beer garden in the 26,000 sq. ft. space. Mr. Worthington is also a co-owner of Indie Hops LLC, which got a lot of press last year for its new hop pelletizing and organic hop advancements. I have been seeing Indie Hops products more and more around Portland as they become more well know for their high quality hops.

Not surprisingly Chad Kennedy plans to bring his own twist to the brewery. Besides the popular IPAs that made Laurelwood famoud, Chad hopes to brew more experimental beers and bring a more educational approach to the new concept, although how the plan for execution is unclear. Bend Bulletin quotes Chad on this subject:

“I want us to make a difference. I want us to push the envelope, … get the Bend community, get the brewers’ community all involved, you know, and play that role, because it seems there’s not really a place where that’s happening right now,”

It seems like the venture is still a ways off, as no permits or applications have yet been filed to begin improvements or construction on the brewery, but city officials say the plan looks like a go so far. The reported opening won’t be until late 2012 or 2013, so I suspect we will be learning a lot more in the next year.