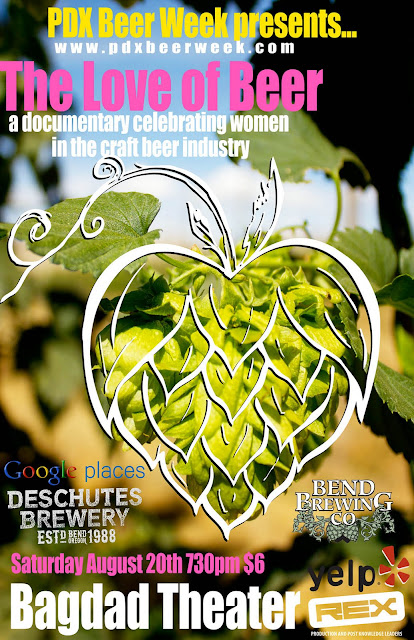 As the big announcement of the first annual PDX Beer Week is coming soon the first news of one of the marquee events has been released. The long awaited premiere of filmmaker Alison Grayson’s documentary of the women of the craft beer industry “The Love of Beer“ will debut at the Bagdad Theater on beer week’s opening weekend Saturday August 20th.

The Love of Beer from Lingering Illocutions on Vimeo.

More than two years in the making, the film examines why women, a small segment of the craft beer industry, do what they do from their everyday lives to their struggles in work. It’s not for feminism or equality, it’s for “The Love of Beer.”

Brought to you by the first annual PDX Beer Week with presenting sponsors Google Places, Yelp!, Deschutes Brewery, and Bend Brewing, the August 20 premiere at the world-renowned McMenamins Bagdad Theater will be an event you won’t want to miss. Much more than the first screening of the documentary, it will also feature a panel of special guests, including subjects of the film Bend Brewing Brewmaster Tonya Cornett; Sarah Pederson, owner of famous North Portland bottle shop, beer bar, and pasty tavern Saraveza; Founder of the Pink Boots Society Teri Fahrendorf; and Deschutes Brewing’s Veronica Vega. All of the panelists will be speaking about the film and their experiences in the industry, and the session will be MC’d by the Beer Goddess herself, Lisa Morrison. It all starts at 7:30pm when the doors open for drinks and a meet-and-greet, followed by the panel discussion on-stage at 8:30pm and the roughly 75 minute documentary premiere at 9:00pm. Details on the event’s afterparty are soon to follow. Thanks to sponsors Deschutes Brewery and Bend Brewing, we will be offering $3 pint specials from these fine Bend-based breweries all evening!

Synopsis:
The Love of Beer is a documentary devoted to the stories and passion of the women at the forefront of the Pacific Northwest beer community. The beer industry is exploding; as of 2010, there are 1,759 breweries operating within the United States–1,716 of these are craft breweries. While the industry is expanding rapidly, growing 11% by volume in 2010, women within the industry are a vast minority. Out of the approximately 50,000 craft beer workers, only 598 currently belong to the Pink Boots Society, an organization for women in the industry.

Things weren’t always this way. Brewing used to be a household chore that fell upon women. Both Egyptian and Sumerian cultures have goddesses of beer, and in in the middle ages, fewer than 8% of brewers were male. It wasn’t until the industrial revolution that brewing shifted from a women’s small enterprise to the domain of (mostly male) factory workers. Beer and brewing gained a “men’s club” stereotype and, further enforced by marketing and popular media, the industry has remained a heavily male-dominated field. 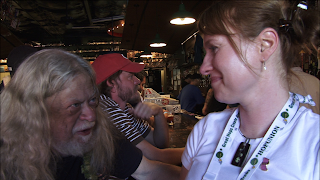 However, in the Pacific NW, women are fighting their way towards being some of the most influential people in the brewing industry. From the farm to the consumer, Pacific NW women are setting new standards for brewing and changing the way the nation looks at women and beer.

The Love of Beer features Sarah Pederson, owner of Saraveza, and Tonya Cornett, brewmaster of Bend Brewing. Walk into Saraveza, located in North Portland, and you’re instantly aware of Sarah’s deep passion and love for beer. Cozy and coffee-shop like, this beer bar offers a rotating tap of the finest craft brews, along with an impressive selection of bottles and cans. The menu echoes Sarah’s Wisconsin upbringing, and the walls, shelves, and nooks and crannys are filled with breweriana- vintage beer signs, lights, and ads. The staff is friendly and knowledgeable, and Sarah is often seen mingling with her customers, laughing and talking to them about beer. Things seem settled after Saraveza’s one year anniversary, but life rarely stays settled for long. Life changes suddenly force Sarah to change how she fits within the beer community and question how beer will continue to be at the front of her life.

As the head brewer of Bend Brewing Company, Tonya Cornett’s job reflects the typical small brewery brewer–keeping tanks full, producing plenty of IPA for the town’s tourists, and keeping the locals coming back with seasonal and specialty beers. But things are starting to shift for Tonya. People are recognizing her. People who have never tasted her beer know of her and are dying for a sip. And she keeps winning medals. In 2008, she became the first woman to win Small Brewer and Brewpub of the year at the World Beer Cup. We follow Tonya’s career and join her in competitions, watching her continually change how the industry views brewers in pigtails, and watching her struggle to accept her fame and how it will alter her career and life.

The Love of Beer has a hearty supporting cast. Teri Fahrendorf, the second female brewmaster in the US, introduces us to the Pink Boots Society, an organization devoted to supporting, educating, and opening doors for women in the beer industry. We visit Gayle Goshie, owner of Goshie Farms, during hop harvest, and Amy Welch as she diligently cleans taplines for one of Portland’s favorite breweries. There are dozens of jobs waiting for women in the beer industry, and we do our best to expose as many as possible. 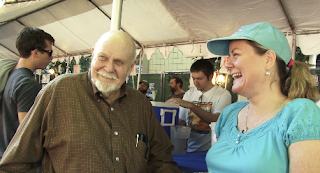 The Pacifc NW Beer Industry would not be complete without the beer community, composed of those inside the community, and the fans, supporters, and advocates outside of the industry. We frequently visit members of the community to celebrate why they love about beer, to dissect why there aren’t more women involved, and to explore what can be done to change that.

These inspiring women are not afraid to fight discrimination and make sacrifices for the sake of their craft. While these women acknowledge that their struggles are opening doors for females everywhere, they’re not doing it for feminism or equality…they’re doing it for the love of beer.

Thoughts from filmmaker Alison Grayson:
About three years ago I impulsively moved from Philadelphia to Portland and lived with a friend who was involved with the Portland craft beer industry. I was blown away by how instantly warm and welcoming this community was-it was unlike anything I had ever seen. The craft beer community quickly became my second family, and I started incorporating my background in video production by making short videos for friends’ beer blogs, festivals, etc. I started going to more events and met more and more people in the community and in the industry. I began to notice a huge disconnect between the vast amount of women beer consumers and the sparse number of women who worked in the beer industry. After meeting inspirational women like Sarah Pederson, Tonya Cornett, Lisa Morrison, and Teri Fahrendorf, I knew that I had to make a documentary celebrating the amazing women in the industry and introduce others to the community I had fallen in love with. This documentary has been funded by fundraising events and through Kickstarter, and would not have been able to be completed without the support of the community. I can’t thank everyone enough. 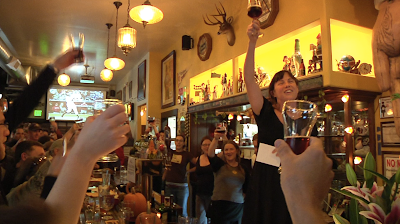