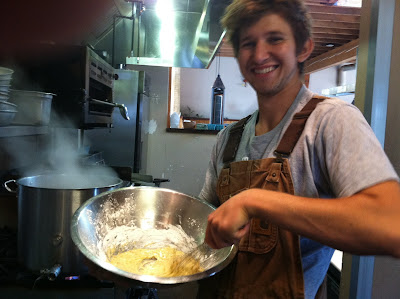 Up at Breakside, we’ve decided to join in the fun for Portland Beer Week and throw a small event in the spirit of two of my favorite things: breakfast and beer. 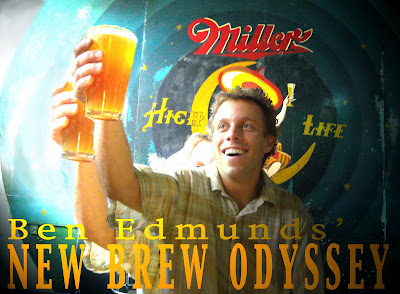 This Thursday is Breakfast Beers Night, and we will tap three breakfast-themed beers. Additionally, our kitchen crew is whipping up some special plates so you can truly enjoy breakfast for dinner.

Two of the beers are variations on current and upcoming seasonal releases. Our Breakfast Stout is done in the traditional vein of this ‘sub style.’ We’ve taken the Oatmeal Stout that we brewed for owner Tony Petraglia’s wedding and have aged it on Ristretto Roasters Cowboy Blend coffee. Unlike many coffee beers, we infused this brew directly with the coffee grounds, which provides an intensity and oiliness to the coffee character. It also has the distinct drawback of killing the head on the beer, but I feel that from a flavor profile point of view, it’s worth the tradeoff. I want a breakfast stout to be roasty, silky, and aggressive—a wakeup call.

Up next is our Whiskey Before Breakfast Smoked Porter. Earlier this month, Alex Ganum from Upright and Yetta Vorobik of The Hop and Vine collaborated to make a Smoked Porter for a special event at Yetta’s pub next month. The ‘regular’ version of the beer won’t debut until then, but I racked off about two 1/6 barrels worth of finished beer onto oak chips that had been soaking in rye whiskey. The whiskey aromatics are prominent in this beer, and the spicy rye character is a nice complement to the smoky finish.
The real experiment in our series of beers for this event is a beer called “The Ripening,” an interpretation of the long-extinct Devon White Ale, also known as a West Country White ale or a Lober Agol. British beer blogger Martyn Cornell has a great, extensive discussion of the history of this beer, but here’s the short version: brewed in Devon and Cornwall, this beer was a low-alcohol, low-hopped, slightly sour ‘white beer.’ It’s the fermentation process that makes this beer unique, however. First, the beer was fermented with a portion of unfermented wort reserved from the previous batch called ‘The Ripening.’ The reserve was kept warm until it was time to brew the next batch, when it was added before fermentation. Presumably, this smelled or tasted like modern sour wort. For this part of the brewing, we pulled about two liters of first runnings from an upcoming beer and put it into a conditioning vessel with some ground malt and an ounce of hops. We then let the wort sour at 120 degrees for 48 hours before separating the grain matter out. While the sour wort would have traditionally been added directly to cold bitter wort, I chose to add it back into the kettle during the final twenty minutes of the boil to sterilize it.
Second, Devon white ale had a pasty mixture of eggs and flour added to it. Why this was done or exactly what presumed benefit to fermentation this offered remains a mystery. In our case, we beat several eggs with some white flour and ground spelt into a paste and added it to the kettle at knockout. (Our fidelity to historical brewing techniques does occasionally get trumped by a need to keep things sanitary). When brewing this small batch, I knew full well that we might have to dump it. Trolling the internet, there are several stories of ambitious homebrewers having disastrous experiences; fortunately, the finished beer is quite palatable in our case. It has a mildly oily mouthfeel, moderate tartness from the ripened wort, and a light grainy character. It is also as cloudy as any beer I’ve ever made.

All three beers, as well as special beer ‘mocktails’ and other breakfast-y festivities begin Thursday at 3 PM at Breakside. The beers will be available on tap until they run out; food specials are available for one night only.