Bazi Bierbrasserie the hop and vine 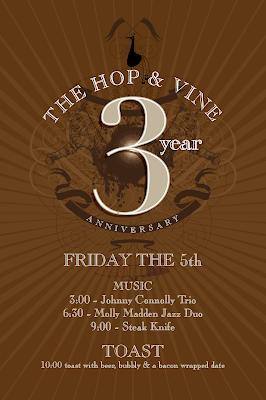 Possibly the most underrated beer bar and bottleshop in town, The Hop & Vine, turns three years old today, August 5. As luck would have, today is also International Beer Day. No, not #IPAday, just plain beer day. Now that is something we should all be able to get behind.
Celebrating the Hop & Vine’s 3 year anniversary occassion is live music on the patio all day long starting at 3pm, and a 10pm toast of the 3 B’s: Beer, Bubbly & Bacon wrapped Dates! In addition to the regular rotating taps, you can also expect a rare keg of Double Mountain’s Rainier Kriek and Upright Brewing’s Flora Rustica on tap.
Bazi Bierbrasserie is also supporting International Beer Day with a Free Bazi t-shirt to the first 10 check-ins via facebook, Yelp or foursquare.