Halloween Industry News lompoc Portland Release Party
Halloween is coming up and the nice brewers at Lompoc have the perfect beer–Monster Mash ,an Imperial Porter that will debut on draft this Friday at the release party at Lompoc’s Sidebar location. There will also be an outstanding lineup of other unique beers (detailed below), and this is just the first of Lompoc’s long lineup of new beers and events coming up this fall and into next year.
First a little background information: Lompoc was founded by Pete Goforth and Bob Rice who hired Jerry Fechter to build and run the original brewery, the New Old Lompoc, at 1516 NW 23rd. Fechter was only a homebrewer at the time, so he decided to spend two weeks at the Siebel Institute of Technology to learn everything he needed to know. The original pub brewed 300 barrels a year and distributed to the Goforth and Rice network of pubs that included the Virginia Cafe, Tonic Lounge, Mulligan’s, Putters, O’Malley’s, and O’Briens.
In late 1999 Fechter decided he wanted to purchase the brewery for himself, but he needed a partner, so he approached the late great Don Younger. “To find people with money to invest was easy. I needed a prtner who already was established to make Lompoc more reputable,” explained Fechter. “Don made sense. He was smart, had a lot of connections, and was a hell of a guy.” They purchased the brewery in 2000 and continued to brew for the original owners’ pub network. In 2003 Don and Jerry decided they should have their own satellite pub and found the great craftsman-style bungalow house on SE Division that is now Lompoc’s Hedge House. Since then the Lompoc local mini-empire expanded to the new brewery at the 5th Quadrant, the attached Sidebar, and the spinoff Oaks Bottom Public House in the Sellwood neighborhood.
This brings us up to today. A few days ago I found myself at Lompoc’s Sidebar to meet Jerry Fechter’s new crew that he has assembled over the years and try their Halloween-themed beer lineup. 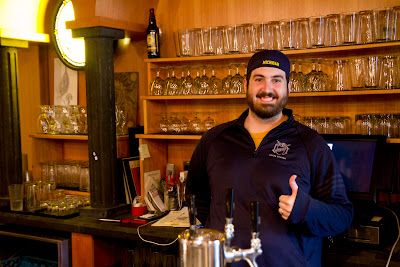 Zach Beckwith (top), whom I will dub the Wolfman, leads brewery operations at the original New Old Lompoc and consistently brews one of the most exciting rotating seasonal and one-off beers in town. There is always something new brewing at New Old Lompoc. 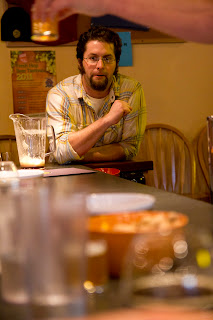 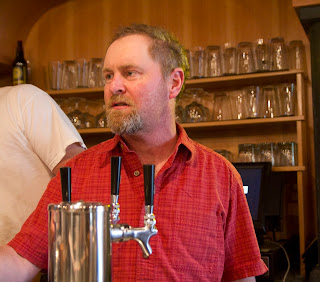 Brian T. Kielty (above left) is certainly the Frankenstein of the group and works as chief cellarman and keeper of the vintage beer and barrel aging experiments that he often assembles from different parts for new blended experiments. He is responsible for many of the rarities you can find over at the Sidebar. Dave Fleming (above right) would definitely be the Dracula of this group, with many years of brewing experience all around Oregon. He has learned from and trained the best of them, and now heads up the main production brewery at the 5th Quadrant. Together with the rest of the Lompoc crew featuring members from New Old Lompoc, 5th Quadrant, Sidebar, and Oaks Bottom pub they make up…
The Monster Squad 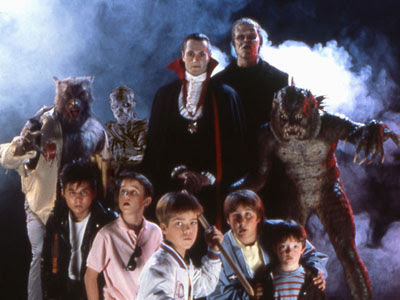 All kidding aside, they have an outstanding lineup of taps for Friday, all of which I tried already:
Monster Mash, an Imperial Porter featuring strong chocolate and roast flavors with a touch of red fruit. (8.1% Abv)
Flamingo, our Condor Pale Ale fermented in Bourbon barrels with 35 pounds of sour cherries (5.2% Abv)
2008 Mon Cheri, a Belgian-style golden ale brewed in January 2008, featuring a mild fruitiness and a complex spicy character. (6.4% Abv)
Bierz Brown, a dark brown ale with a malty body and strong chocolate and roast flavors. (5.3% Abv)
Steaming California, a steam beer brewed with an American Pilsner yeast strain fermented at ale temperatures. It features a slight bitterness with a balanced body, hopped with Cascades and Clusters. (5% Abv)
C-Note Imperial Pale Ale, one of our best-known and beloved brands. Brewed with the seven “C” hops (Crystal, Cluster, Cascade, Chinook, Centennial, Columbus, and Challenger), this beer pushes the bitternesslimit to 100 IBU’s. It’s also available in 22oz bottles. (6.9% Abv) 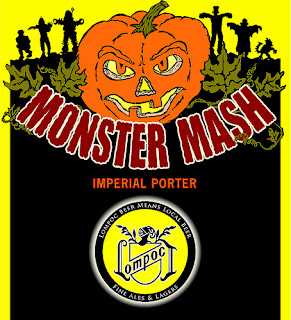