2011 beer release brewmaster bridgeport brewing
Facebook Twitter Reddit SMS
Fresh hop season is only just getting started and I marked two more fresh hop beers on my belt yesterday with a sneak preview of Bridgeport Brewing‘s Hop Harvest coming out this Thursday and Breakside‘s just-released small batch 100% Simcoe-hopped wet pale ale. This brings the total count of fresh hop beers I have tried so far this season up to 5. This means I have enough now to compare and contrast, which I did while talking with Bridgeport Brewmaster Jeff Edgerton about what makes these beers special.

So far I have tried the 2011 fresh hop versions of:

Out of the five I have had so far, the Full Sail Hopfenfresch, Breakside Wet Hop Pale and the Bridgeport Hop Harvest all stand out as having that distinct fresh/wet hop flavor, while the Deschutes Inversion and Full Sail Lupulin could have been confused as just another hoppy beer.

The Bridgeport entry is light-bodied with an invisible malt backbone to place the hops onto. Although it is not all that bitter, it does have that noticeable green flavor of fresh hops, along with a citrus and spicy hoppiness that lingers to the finish and coats the mouth. After trying it we traveled to Breakside to try the 100% Simcoe fresh hopped pale ale. It was vastly different, mostly from the unique flavor of the Simcoe hops, but also from the exhibiting the complete effect of wet hops through and through. This beer may have shown off the green, grassy, oniony character better than anything else. However, as I sip now from a bottle of Hop Harvest, I cannot help but think it is a slightly more accomplished balance of kilned bittering hops and tasty wet hops. The nose is distinctly citrusy and vegetal in a good way.

While enjoying the latest edition of Hop Harvest on the roof of a building in Southeast Portland, I had the chance to talk with Bridgeport Brewmaster Jeff Edgerton about fresh hop beer and his process in making it. Why fresh hop beer, and how does he approach it differently than other hoppy beer?

“we are literally 25 miles from fresh hops here”

“fresh hops to me…if you are standing next to our kettle or hop jack and you are smelling, the aromas coming off those are aromas that are being lost. They smell wonderful and I love to stand there and smell that, but they are coming off and they are going away.”

“As sad as it seems, those are hop aromas that are being lost are gone forever. Hops that have not been through the kilning process, they have something special there that you can only capture one time a year, and that’s the time when they are harvesting hops before they have thrown them in that kiln and dried them off.”

“What we did in this beer is we brewed it with a background of bittering hops that are not fresh hops, and then we go and add green hops in the cold beer process, so that means we don’t use any heat with that process. We put the green hops in the fermented beer and hold it for 2 weeks and then do a little bit of circulation with those green hops. Just like you would in a dry hop process, but put it in the beer.”

I asked Jeff to elaborate a bit on what he meant by recirculating fermented beer to pull out more flavor:

“We have some really versatile tanks in our fermenting cellar that have an upper manway and a lower manway and also have a racking arm. So what we can do is pull the beer off the bottom and send it up the racking arm, we set a slow speed on a low shear pump and then move the beer out from the bottom and into the top of the tank and roll the whole thing over the hops, over the liquid that is in the tanks, and make sure it gets really good contact with all those hops.”

On the fresh hop variety they use Centennials from Goschie farms:

On how he would describe this years Hop Harvest ale:

“This is not going to taste like a real malty beer. What you’re going to taste is mostly hop aromas coming through this thing. I wanted to make sure to showcase those hops as much as possible. The green hop is a really delicate flavor. Once we have taken it off the hops we do a very light filtration. I just want to make sure we don’t have a lot of solids dropping to the bottom of the bottle or something like that. We want to preserve as much hop flavor as we can. It’s all a matter of handling it as delicately as possible.” 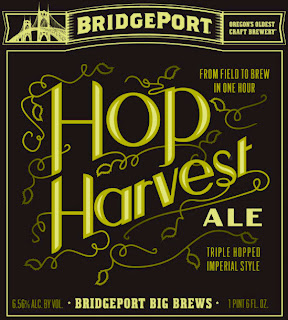 BridgePort will host a Hop Harvest release party Thursday, September 15, at 5:30pm at the BridgePort BrewPub in the Pearl at 1313 NW Marshall St. Free and open to the public, attendees can be among the first to sample the new brew while supplies last and purchase a limited-edition 22-ounce bottle of Hop Harvest.