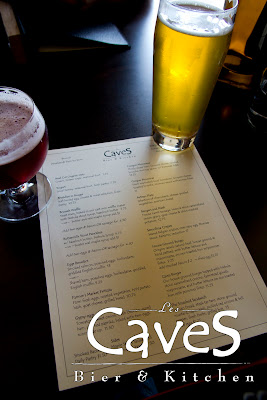 Corvallis, Oregon, is a small, off-the-radar city known primarily as the location of Oregon State University and its currently bumbling football squad, the Beavers. But as it turns out, there has been a strong yet overlooked craft beer culture growing there for quite some time, beginning with the homebrewing community nurtured by the fermentation science program at OSU and a few breweries like Oregon Trail. More recent breweries, such as Flat Tail and Block 15 have begun to really put the city on the map.
Having opened Block 15 three years ago, owner/brewer Nick Arzner is branching out to open ‘Les Caves‘ a European style bistro and bier bar that will add even more diversity to the city’s beer scene and another reason to make Corvallis a must-visit destination. Last Friday The New School made the two hour trip from PDX to Corvallis for an early preview before it’s official opening this week… 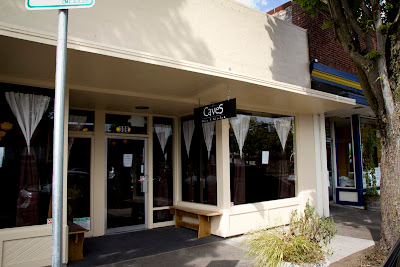 Walking around the corner of a relatively quiet downtown block in Corvallis are the darkened windows of Les Caves. Curtains decorate the windows and a small minimalist black and white sign hangs in the doorway proclaiming rather modestly “Bier & Kitchen”. If I were not in town specifically to find Les Caves I would walk right past without having any idea the treasures inside. This is not a bad thing by any means, and further cements what Nick Arzner calls his take on the local great bier tavernes and gastropubs of Europe. 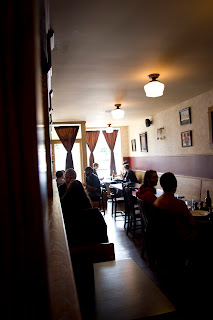 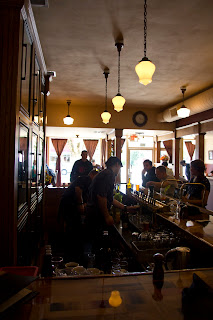 The interior is warm and a little dark, with most of the light flooding in through the windows. The decor is warm and cozy and kind of down home feeling, with lots of warm faded yellow and some rustic brown and reddish colors used to really invoke a local neighborhood restaurant, or even a wine bar. In fact, the large wood-paneled wall of bottle coolers behind the bar could easily be mistaken for a massive vino collection, but upon closer inspection huge bottles of Duvel and Chimay can be seen behind the UV-protected yellow tinted glass windows among other smaller bottles of what may become the best bottle list for a restaurant in the state. 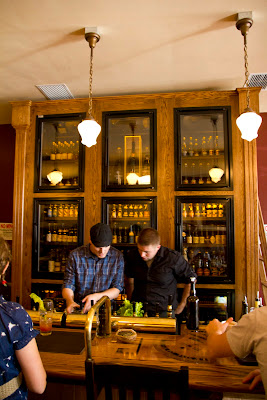 Yeah, I referred to ‘Les Caves’ as a restaurant because, although it is called a bar or a tavern, it most definitely has the feel of a casually quiet and refined restaurant. It’s someplace where your focus is not taken off of the food or the beer by large TVs or loud music. 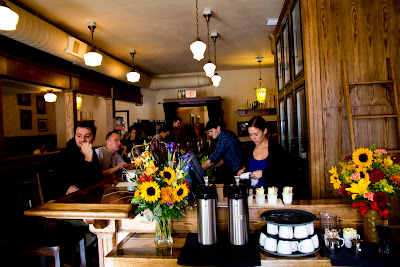 Nick Arzner says, “Our influences draw from Belgian beer bars, Gastropubs, American tap houses, and craft breweries. Les Caves is a place where you know the beer will be top notch and the food properly prepared with local and regional ingredients. You can some in and grab a pint and snack for under $10 or enjoy and extended coursed out meal with bottles of beer.”
That pretty well sums it up, but I think we can go a little more in depth. From a distance the bar top looks like a nice but somewhat standard wooden bar with a nice shiny finish, but once you pony up to it and grab a seat its beauty is immediately apparent. 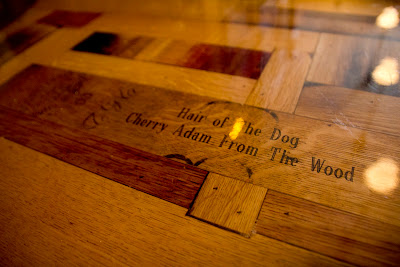 Underneath its shiny polish are oak barrel staves from some of the Northwest’s best barrel-aged brews that have been re-purposed, cut up, straightened, and aligned meticulously for the bar top. Other than just being beautiful, it really speaks to the love of oak barrel-aging that Nick Arzner and Block 15 have become famous for, as well as how that passion is making the transition over to the bier bar. 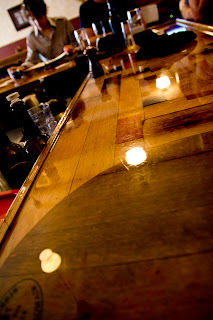 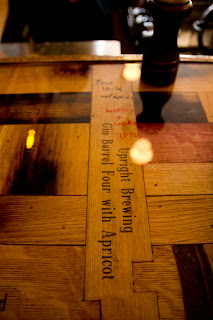 This finally brings me to the fine beverages that will be served on this beautiful thing of polished wood and history. To start off, though it shares a wall and an owner with Block 15, Les Caves is no more an extension of it than Grain & Gristle is to Upright Brewing in Portland, an association of which I was reminded of a few times. Les Caves will only have two Block 15 beers on tap, both of them made especially for the new establishment. First is the standard that all Oregon beer bars must now have–Caves IPA, a 6% ABV IPA made with Oregon grown Nugget and Cascades with an emphasis on flavor and aroma additions. I found it to be nice and quaffable, with a flinty strong malt backbone and a crisp citrusy bitter finish.
But what I was really excited about was the second house beer, Caves Saison. It is currently a 5.5% ABV farmhouse ale brewed with the original Upright Brewing house yeast–French Saison. This beer was the first thing I asked for after being seated at our table. I was excited to try Nick’s take on the saison, since I remembered a past saison he made as very good but not quite dry enough for the style, and I think he agreed with me. My interest was further piqued when I heard it used Upright Brewing’s old house yeast, which I loved even though it was hard to work with. Apparently I was not the only one who was excited, because our server came back and told me the keg had just kicked! The bar was not even officially open yet, but I guess the friends and family know a good thing when they taste it. Luckily Mr. Arzner himself retrieved a glass for me from a backup keg. It came to me in a pretty BFM glass that really did well to showcase the beer’s bright hazy orange colors and its big white fluffy head, exactly how I like my saisons to appear.
The nose on this beer did not disappoint, and I was immediately taken back to my first sips of Five from a bright tank when it still used Crystal hops. Caves Saison uses Sterling hops instead of Crystals, which are a similar locally grown variety of German hops with a spicy character and are often used as replacements for Saaz the classic Pilsner hop. Anyway, the aroma captures that lemony fruity and spicy aroma that I love, and I am happy to report that the beer tastes the same with a full but crisp body, notes of stone fruit, and a spicy, bittersweet hop finish. This is a good beer to pair with food, as a saison should be. Alas, this beer will not be around long, but will continue to change and mutate much like its yeast.
The Caves Saision will change with each season, and this first batch is the only one that will use a commercially available yeast strain. From here on out variations will use a new Block 15 “house” yeast top cropped from the open fermenter “koelschip” that resides in the last room of the brewery’s basement cellar. The house yeast will be a blend of various strains and will be ultra fresh from the top cropping, Nick plans to let the yeast continuously evolve, as a strain that is never isolated and caged in a lab will do after many generations, adapting to its environment and likely picking up different bugs. A portion of saison will also be aged in oak barrels, with some blended back in to each fresh batch. I was pretty surprised when I heard this, as I don’t think I know of anyone else doing that in America, though Nick says, “someday if we really love the character we may isolate and/or bank the blend” at a lab. Outside of the yeast, you can also expect the recipe to change with different hops, but only Oregon-grown varieties, which will add to the local farmhouse traditions to which the style owes its heritage.
Anyway, back to the bar. 16 rotating taps will pour at Les Caves, along with over 100 bottles currently in stock, with room for 200 eventually. The beer list will focus on beers that pair well with food, with a mix of both the delicious everyday offerings from both locals and imports to rare and one-off produced beers like the Sole Composition series of bottles from Upright. 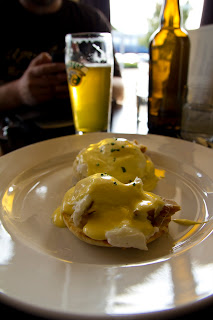 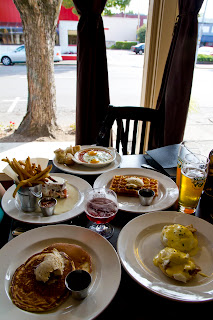 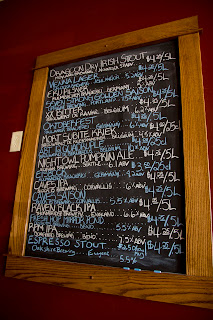 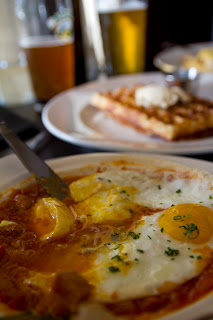 I almost forgot to mention the food. We attended a special brunch hour preview and decided to order as many options as we could eat to get a sense of the fare. I knew I had to get the ‘Brussels Waffle’, which is yeast risen and baked in a cast iron waffle maker. It’s served with a syrup made from Block 15’s Nebula Imperial Stout and a huge chunk of housemade hazelnut butter. On appearance alone it looked delicious, and it did not disappoint. The waffle was soft, creamy, and nutty, with the rich finish of stout syrup made for an extremely satisfying menu option. “SNOB” Ritch ordered the ‘Eggs Benedict’ with smoked salmon, poached eggs, hollandaise sauce, and a griddled English muffin. He will have to tell you about that, but it looked like a classic take on the popular breakfast item. I had to try the ‘Gypsy Eggs’ for something a bit different. These came in a bowl filled with a sweet tomato stew made with fresh chorizo sausage, cured ham, smoked paprika, and sweet onion, with two baked eggs sunny side up floating above it all. If you’re in the mood for something hearty yet not too heavy, this is right up your alley. Finally, Amy ordered the ‘Croque Monsieur’ with thinly sliced ham, gruyere cheese, toasted brioche, mornay sauce, and pommes frites on the side. I only had a couple bites of Amy’s, but the ham was just soft enough and the brioche just crisp enough. The real star, however, was the mornay sauce–it covered the sandwich, a thick, rich, and creamy concoction, but not as buttery or salty as a gravy. It served as a delicious dip to be soaked up by the bun.

Les Caves also has a knowledgeable staff headed up by Drew Salmi, one of the most active members of the Corvallis craft beer community. He previously worked at Corvallis Homebrew & Supply and is the co-founder of the recent Corvallis Beer Week. Drew will be working along with Chef Darius Jones to plan special food and beer pairings, dinners, brewery special releases, and small festivals. 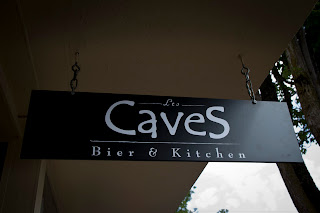