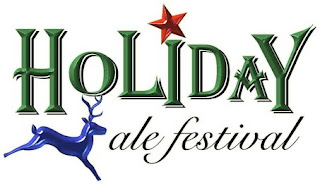 The beer geeks favorite fest is coming back November 30th. Let’s cross our fingers there are no odd re-entry rules and no pin-up girls this year. Press Release:
PORTLAND, Ore. – Oct. 11, 2011 – The 16th annual Holiday Ale Festival will take place Nov. 30 through Dec. 4 at Pioneer Courthouse Square, located at 701 SW Sixth Ave. on the MAX Light Rail line. The popular event will feature four-dozen big, bold ales designed to fend off the cold chill of a long winter night. From IPAs, Belgians and barleywines to winter warmers, porters and stouts, these beers are crafted specifically for the event or are hard-to-fine vintages, helping secure the event’s reputation as one of the nation’s preeminent winter beer festivals.
Event hours are 2 to 10 pm Wednesday, 11 am to 10 pm Thursday through Saturday, and 11 am to 5 pm Sunday. To avoid the lengthy lines that often accompany Northwest beer fests, the recommended days for attendance are Wednesday, Thursday and Sunday. The Holiday Ale Festival is for ages 21 and over.
What makes this festival standout from other similar events is the beer selection; the festival works with every brewery involved to make sure they can send a beer that has either been made specifically for the event, or is a rare or vintage beer that isn’t commonly tapped in the state. According to festival manager Preston Weesner, “It’s about the fans. This is a once-a-year event and these beer lovers are here to support their favorite brewery. When they get up to the taps and find something special, it further solidifies their support of Oregon craft brews and strengthens our reputation in the beer world as THE place to drink beer.”
To enter and consumer beer, the purchase of an entry package is required. The general admission package at the door costs $25 and includes the 2011 tasting mug and eight taster tickets. Advance general admission packages cost $25 and include the tasting mug, 10 taster tickets and expedited entry all five days. Advance VIP packages are available for $50 and include the tasting mug, 20 taster tickets, a bottle of water, access to VIP lines and express entry all five days. Express re-entry requires a wristband and the 2011 mug, and is subject to the festival’s capacity. Previous year’s mugs will not be filled. Advance packages are available online at www.holidayale.com.
Once inside the festival, a full mug of beer costs four taster tickets, and a four-ounce taste costs one ticket. Certain limited release and special tappings may not be available in full mug pours, or may cost double tickets. Additional beer tickets can be purchased for $1 apiece. Designated drivers in a party of two or more maypurchase a designated driver wristband for $5, which includes Crater Lake Root Beer or bottled water for the duration of the stay.
Despite being held outdoors during one of the coldest months of the year, more than 17,000 festival attendees stay warm and dry under clear-topped tents that cover the venue. Gas heaters create a cozy ambiance beneath the boughs of the region’s largest decorated Christmas tree. In addition to beer tasting, the festival also features on-site food, event merchandise and a coat and bag check that raises funds for the Children’s Cancer Association.