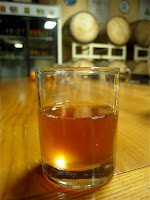 This Tuesday, November 29th,Lompoc Brewing unleashes 9 of 10 different beers made for the holidays at their Sidebar location. One of them in particular caught our attention–Cherry Christmas is a beer made entirely from other finished beers, many of them barrel-aged and some brewed with cherries and wild yeasts. The components of this blend were carefully chosen and painstakingly blended for this week’s Holiday Ale Festival (where it will also be poured). Lompoc Head Brewer Dave Fleming, Lead Cellarman/Brewer Bryan Kielty, Lompoc owner Jerry Fechter, and Holiday Ale Fest director Preston Weesner concocted the blend while “SNOB” Ritch and I got to sit in. Check out an exclusive behind-the-scenes look at the blending process and interviews with Dave Fleming and Bryan Kielty:

Of course, Cherry Christmas is not Lompoc’s only new holiday release. There are actually 9 others, including annual favorite Old Tavern Rat, which will be available in bottles for the first time this year. Read below for my tasting notes on the beers.

Old Tavern Rat is a barleywine aged for one year prior to its annual winter release. It is one of my favorites, as well as that of many other beer geeks. But did you know that it was named after a nickname for Horse Brass proprietor Don Younger? Yep. And in honor of his passing this year Lompoc has bottled a 2 year old Bourbon Barrel-Aged Old Tavern Rat in 22 ounce bottles with a painting by John Foyston depicting the late great Mr. Younger on the label. If you haven’t picked up a bottle yet at Lompoc’s Sidebar, it may be too late, but if not, I suggest getting there this Tuesday for their release party.

Below is a description of all 9 beers being released on Tuesday, followed by my very brief tasting notes on each of them. We’ll start with Cherry Christmas, which is the focus of the video above:

“A bit boozy in the aroma, with oak and cherry tartness; it is quite delicious smelling. Flavor is much like the aroma, only without the booze–it is light and fruity. The Port barrels really come through in the flavor, as well as the funkiness of the lambic yeast blend accentuating the tartness of the cherries.”

This spiced golden ale is infused with cinnamon, clove, lemon zest and fresh ginger. It is bright gold in color with a strong cinnamon aroma. The flavor mixes bready wheat malt character with underlying ginger notes and a hint of citrus. 4.6% ABV

“An over-spiced winter beer. I bet M. Cizmar at Willamette Week would LOVE. it though! Cinnamon, cloves, and ginger dominate the palate. Jerry says this is ‘somethin’ for the ladies.'”

“Malty, fruity and yeasty. It does indeed taste like a Belgian Red with a dry finish and an almost herbal like bitterness. It’s OK, but not for me.” 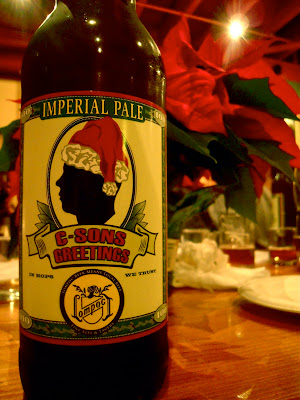 “Malty, grassy, citrusy hop aroma with sweet grapefruit in the nose. Nice strong bitter backbone, but balanced when compared to today’s extreme Double IPA standards. Still has a great chewy malt texture similar to Sierra Nevada’s Celebration. It finishes quite hoppy, like biting into a cone, and has a bit of a menthol-like hop flavor that stays on your breath. I dig it.”

Brewed in February 2011, this was aged in Heaven Hill Bourbon barrels for seven months and cellared for an additional month. It has a deep copper color and strong oak aroma with caramel and resinous hop notes. 8% ABV

“Intense bourbon, spice, and malts on the nose. Really honey-like and spicy aroma. Hops have faded in the flavor, but their bitterness combined with the bourbon spice and oak leaves a nice coating on your tongue. Still pretty easy to put down a glass of this with everything going on.”

“Light roast, malt and milk chocolate, reminscent of chocolate milk aroma. Flavor is light but creamy, grainy, and quite nutty. Sort of like chewing on a vanilla-flavored coffee bean, leaving a tongue coating dry roastiness.”

This lager was brewed with a generous amount of Munich malt to develop the deep amber color and rich malt flavor. The malty profile is balanced with a spicy hop bitterness. 7.3% ABV

“Malty smooth caramel aroma of a lager, with a little fruit (raisins) in the malty and somewhat sweet palate. Not for me, but I am not generally a bock fan.”

This dark, amber-colored barley wine was aged for almost a year prior to its release. It has a strong bitterness that is balanced with the sweetness of caramel and toffee flavors. 9.4% ABV

“I usually love this beer. This year is no different. A great depth of malt and hoppy bitterness without becoming overly heavy and syrupy. It is big and bold but banlanced and simply delicious. I am tasting cedar, bark, English malts, or the yeast, perhaps? It has a rock candy sweetness and definitely an English Barleywine character, but amped up for us Americans.”

Bourbon Barrel Aged Old Tavern Rat Barley Wine was originally brewed in December 2009, then aged in Heaven Hill Bourbon barrels for 10 months and cellared for another 13. The dark amber-colored barley wine features a soft oak character with notes of raisins and figs. 9.7% ABV

“Pretty much everything I said about regular Old Tavern Rat also applies here. but with the addition of more spiciness, with vanilla, oak, and a butterscotch/caramel toffee flavor. I can’t decide if I like this as much as the regular version, but it gets a big thumbs up from me regardless. Jerry says Don Younger would “fucking hate this beer.”