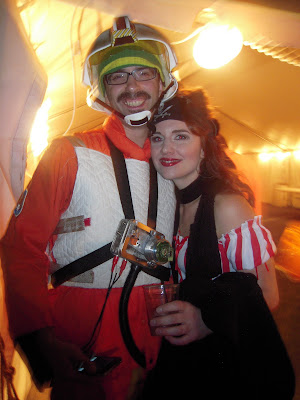 Last Saturday’s main event was the second annual Night of the Living Ales at Burnside Brewing. Evolving from its origins as a pub crawl in its first year to a full-blown Halloween-themed craft beer fest this time around, the event was an inarguable success with over 50,0 attendees. One of the more unique craft beer events of the year, if I do say so myself, we have the pictures and the stories to prove it… (Caution: Some images may not be safe for work) 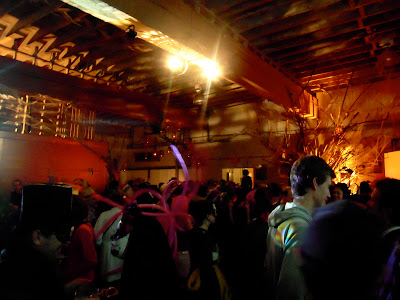 The fest featured 8 different special seasonal and one-off beers like Oakshire’s Black Jack Imperial Pumpkin Porter and Lompoc’s Bourbon Barrel-Aged Monster Mash. The most popular offering, however, was Burnside Brewing’s one-off Altbier infused with Reese’s Peanut Butter Cups, which kicked within a few hours after the party started. Luckily there were plenty of other great beers to drink and much to see, including awesome musical performances by Boy Eats Drum Machine and The Ascetic Junkies.

Many local beer personalities showed up to celebrate the holiday with a craft beer in the beautifully decorated brewery space at Burnside and an outdoor tent.

One of the highlights was certainly the amazing burlesque performances from the gals of Rose City Shimmy, who gathered an enthusiastic crowd around the stage for their sets.

This year’s combo of live entertainment with fantastic beers and elaborate and fun costumes was the natural progression of the event, which gave Portland’s craft beer lovers a good reason to come out and party.

If the success of this year’s fest is any indication, you can expect an expanded beer lineup, a huge tent covering Burnside’s parking lot, and more live music and performances next year as the party truly becomes an event worth adding to your calendar each year.

I heard from numerous people that it was the best Halloween party they’d been to, and people have been begging for another one next year. Perhaps no one enjoyed themselves more than I, after finding myself the MC of the evening.

Hopefully we will see you next year!