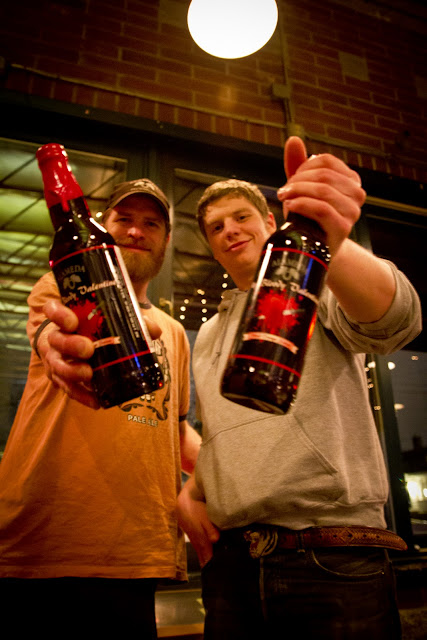 Alameda Brewing,located on the popular stretch of Fremont in Northeast Portland that I do not visit nearly often enough, has a handful of new releases out now. When I visited last week Head Brewer Carston Haney and Assistant Brewer Marshall were showing off wax dipped bottles of “My Bloody Valentine”.

You may have heard but the small brewpub has experienced some big changes recently in the form of a second location devoted entirely to production brewing. With a new 20 barrel brewery located in the southeast industrial district near the train tracks up and running, Alameda’s distribution has grown and the brewery is slowly working its way into the Seattle market. Even better for us Oregonians is that the new brewery frees up some space on the original pub brewhouse to make more one-off and seasonal beers, such as “My Bloody Valentine”. 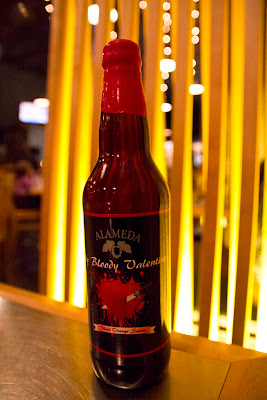 Clocking in at 5.5% abv and 21 IBUs, this beer is labeled as a saison, but it is far from traditional. “My Bloody Valentine” is fermented with Upright Brewing’s original yeast strain, French Saison, and brewed with untraditional spicing of bitter orange peels and blood orange juice. Complementing the pinkish-red hue of the beer, the bottles are topped with dripping red wax, a la Maker’s Mark. My tasting notes include flavors of banana and bubblegum on top of the bittersweet orange peel flavors. It makes for a good untraditional Valentines day gift. 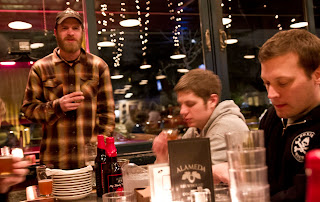 Here are a couple more of Alameda’s new beers you can find on tap at the pub and at some local taphouses.

Barn Owl Imperial Brown Ale
ABV 7.9% IBU 90
The Barn Owl Imperial Brown is brewed in the style of southern English brown ale, only much stronger (7.9% ABV). A myriad of specialty malts impart a smooth, layered flavor with notes of chocolate, caramel, and biscuit shining through. All this malt is balanced by a sizeable 90 IBU’s from three hop additions in the kettle. Just to make the beer a little more American, rather than English, a large dose of Cascade hops were added at the end of the boil lending their pine character to this fine ale

Beaumont Bock
ABV 5.8% IBU 55
Brewed in the style of a traditional lager. Balanced malt and hop profiles make this beer an easy drinker. A blast from Alameda’s past, the Beaumont bock has not been brewed in four years. Many thanks to Upright brewing for the generous use of their yeast strain.