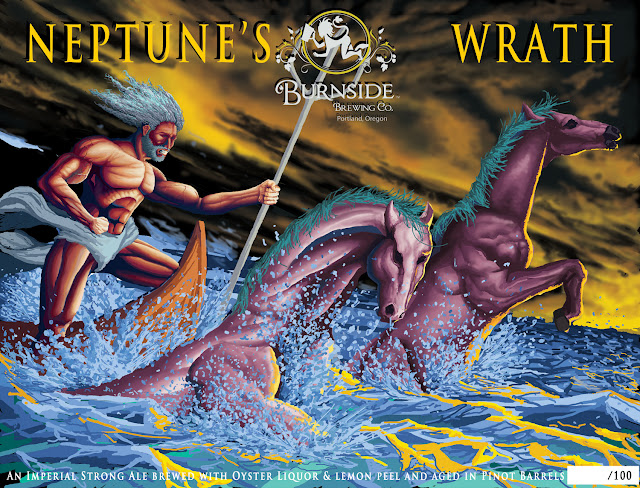 This coming Tuesday Burnside Brewing is releasing its first specialty beer to bottles. Neptune’s Wrath is quite a unique beer and will be bottled in a format similar to brewer Jason Mcadam’s old project, Epic Ale at the defunct Roots Organic Brewing, which was sold in Magnum sized bottles.

Info on the beer from the brewery:

Neptune’s Wrath is an Strong Ale brewed with 18 gallons of Hama Hama oyster liquor and 4 pounds of lemon peel. We took half of this batch of beer and aged it in Cristom Pinot noir barrels. After 6 months on oak we back blended it with the non barrel aged half. This beer is 10.2% ABV and has notes of cherry, french oak, malt sweetness with a slight brininess at the back end.

The name and label are inspired by the Latin god of the seas and oceans and the counterpart of the Greek god Poseidon. A little more on Poseidon from Wikipedia:

Unlike the Greek Oceanus, titan of the world-ocean, Neptune was associated as well with fresh water. Georges Dumézil suggested[3] that for Latins, who were not a seafaring people, the primary identification of Neptune was with freshwater springs. Like Poseidon, Neptune was worshipped by the Romans also as a god of horses, under the name Neptunus Equester, a patron of horse-racing.[4]

Neptune’s Wrath has a subtle taste of the ocean amidst a very Belgian-like ester dark fruit flavors, oak and wine. It has a nice warmth on the backend and should hold up well.

Packaged in Magnum sized (1.5 litres or 51oz) and limited to only 100 hand numbered green glass bottles with a wraparound label, Neptune’s Wrath is expected to cellar well. Bottles go on sale at the pub opening this Tuesday 2/28 at 3pm for $30.
Burnside Brewing Co.
701 E. Burnside
Portland, OR 97214