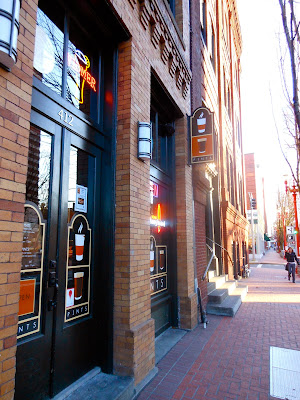 Even though it’s over one year old, I had still never made it into Pints in NW Portland until recently, when I met with Head Brewer Zach Beckwith at the new brewery’s space, which is still under construction. For the last year Pints has laid low in the craft beer community. Located on the fringes of the Pearl District in Portland’s Old Town, it’s just down the street from Davis Street Tavern and on the bus mall and MAX lines. Until now Pints has had an interesting business model of operating as a coffeehouse by day (7am-Noon) and a taphouse by night (4-11pm). Soon, though, they hope to have a new in-house brewery running and will be brewing beers by the beginning of March. 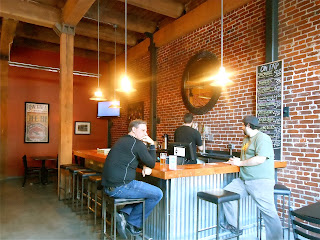 The Pints Brewing front room and bar is a small, intimate space, but it has a warm, modern restored old building feel to it that is welcoming. If you follow the passageway back you will find a long hallway where more tables can be placed. This leads to Pints’s event and meeting space, which is separated by a partial wall. Here is where the construction is happening. The meeting space is soon to be converted into an actual kitchen, and a 3.5 barrel brewhouse is being installed against the far brick wall of the event room. It is a small brewery–the same size that Breakside Brewery pumps a lot of brews out of–with nice copper kettles on legs that will be pretty to look at from a new expanded seating area in the rest of the room, which is separated by a short walkway that drops through the floor into the rather expansive basement. 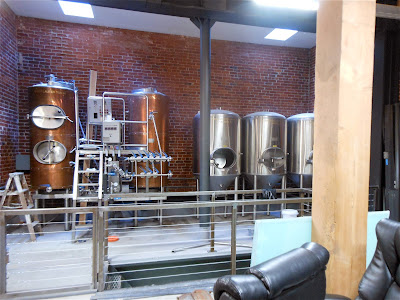 New Head Brewer Zach Beckwith comes from the New Old Lompoc, where he has spent years perfecting his craft making classic American and English style ales, often experimenting with different base malts and single series hops. Unfortunately, the original Lompoc is soon to meet its maker and will close shortly. Zach has brewed his last beer there and is clearly excited to have free reign at a new, though smaller, brewery. The setup should accomodate the needs of the small pub, with a bit extra for very limited accounts. 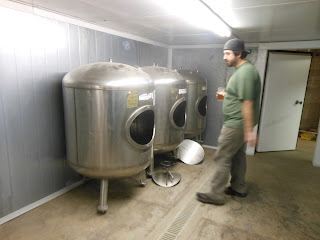 The brewery will open with 100 kegs to fill. Luckily, if it takes off there is some nice room for expansion in the many rooms downstairs, where a mill is currently being setup and a walk-in cooler with bright tanks (and hopefully in the future serving tanks for the pub) reside. 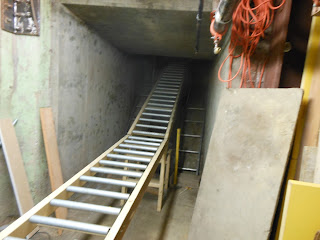 Walk a few rooms back and you can see what can be done with the space over time. Also, as is typical for a downtown establishment, the load-in area is through a dropdown door on the sidewalk. They have fitted a line to slide down boxes and likely large bags of grain that should prove a bit challenging, expecially when considering there is no street parking for those large trucks. I imagine there will be more than a few incidents where traffic could be backed up outside on the busy NW 5th Avenue.

The Old School
The brewing philosophy that will be taken at Pints could be described as something old made new again.

“our approach is going to be very old school. Kind of bringing craft brew back to it’s roots in a way. To me craft brewing is about actually crafting something and learning about your ingredients. With a lot of the experimental work that’s being done it’s an ADD kind of scenario. I am looking for a more focused approach here. We will have more true seasonals here with 4 core beers.”

Those 4 regular house beers express Zach’s love of more classic styles. They are comprised of a Rye Pale Ale, an IPA (of course), an Export-style Stout, and a Tavern Ale, which is basically an English Bitter with an American twist, very malt forward and sessionable at around 4% abv. 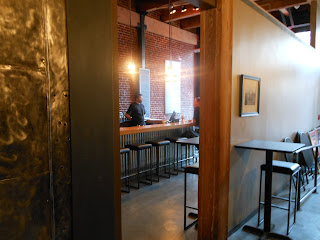 Mr. Beckwith, whom I have known for a little while, has always seemed a low-key crafter of solid beers. He loves to play with different varieties of malts, noting that base malts are often taken for granted as nothing more than a base and have hugely varying levels of quality. It turns out Zach is a very opinionated and passionate guy, feeling as strongly about the styles of beer that many take as commonplace as others are about the more extreme brewing of today. He intends to make Pints beers more approachable for the everyman and get back to the traditions of our brewing forefathers. He has decidedly mixed opinions about the more experimental breweries pushing the ingredient envelope:

at some point the scale tips to where it becomes something of a novelty and I just respect beer to much to treat it that way.”

It’s exciting to see someone just as passionate about real ale as others are about resurrecting ancient forgotten styles and strange exotic ingredients.

“We are getting to a point here where the pendulum is sort of swinging back. I am worried that the casual beer drinker out there see’s a lot of experimental brewing going on and thinks of it more of a novelty. If every beer you make is a special beer for a special occassion than what is your everyday beer, what is truly special then? We will have some special beers but they will be reserved for special occasions.”

This is not to say that Pints won’t have new and interesting beers rotating through their taps. They plan to have 7 or 8 beers at all times, but with more of a classic seasonal release schedule. One seasonal will rotate every 3 months or so, but they will always have both a new big beer and a smaller session beer. The beers are decidedly on the more drinkable side of the equation, though:

“With the name Pints we are not making beers for 3oz tasters where people are like that’s interesting but I wouldn’t want a whole pint. Our whole goal is the best pairing with a pint is another pint.”

But Zach is not to be pigenholed, either:

“I am not going to say that our focus is session beers. Our focus is just making really damn good beer. I think the possibilities of making beer with just the 4 main ingredients are endless” 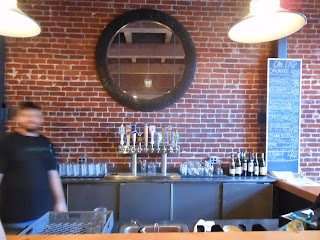 The 1%
You might be asking yourself, does Portland really need another brewery? Especially one located in the new downtown hub of such high rollers as Rogue, Deschutes, and Bridgeport? Oversaturation is a hot subject right now and an extremely relevant question for any new brewery. Bless Zach for being such an eminently quotable and passionate guy, so I will leave his answer unedited to the queston after owner Chad Rennaker passed on it:

“I think the looming specter of over-saturation at this point is a little overblown. It is true that the last few years, in Portland in particular, we have seen an unprecedented number of new breweries popping up, but it seems natural that as more people turn to craft beer that the number of breweries would also grow. If you compare the number of breweries in the state (approx. 100) to the number of wineries (approx. 300) it seems to me that there is still plenty of room for growth especially when you consider that the vast majority of those wineries specialize in one or two of the same varietals. In my opinion, the idea of over-saturation comes into play when you consider the growing number of niche breweries opening that actively target the hardcore beer geek. These niche (or shudder to say, boutique) breweries are essentially cannibalizing the same 1% of beer drinkers out there, while ignoring the other 99%. I guess what I’m saying is that if you only look at that 1% as your market then it could seem crowded but if you look at it from the perspective that the other 99% as well as that 1% is your market then there is more than enough room for more breweries. 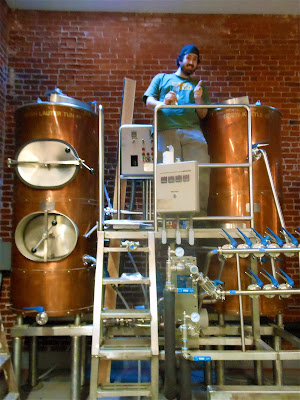 While I think Zach has a point about all the new breweries and the pendulum swinging back to more classic standard 6 pack beers, as I like to call them, even he points out that one of his favorites and most critically acclaimed beers the ‘Voodoo Mild’ brewed for The Mighty Mites session beer fest last summer was the worst selling New Old Lompoc beer of all time. I think it may still be a while before the beer geeks are clamoring for the old school English styles again. When you really think about it, though, the style of the beer is the least important factor. I will let Zach close out this article in his own words:

“It goes without saying that the most important factor in any of this is the beer itself. As long as your beer is great there will be a market for it. However, with that in mind, there are some exceptions. I’ve been talking from a brewpub perspective, but I do think that there is a limit to the packaged beer market. Shelf space has always been and will continue to be a battle for small brewers and as more breweries turn towards bottles and cans that battle will only intensify.”