Exciting news comes today that our friends at Double Mountain Brewery & Taproom in Hood River have big plans to finally expand the brewery and taproom and begin bottling their excellent beers. The news could not be more timely, as it comes just days away from the brewery’s 5th anniversary party this Saturday. Co-Owner Charlie Devereux reveals all below.

Way before The New School I clocked some hours behind the bar at Belmont Station, and one of the first beers of note around that time was the opening of Double Mountain Brewery & Taproom. I took a field trip out to Double Mountain to purchase the first keg of their beer to be sold in Portland. While sitting at the newly opened pub without any knowledge of what it would become, or co-owners Charlie Devereux’s and Matt Swihart’s previous history, I sampled a flight of their inaugural beers. I recall it fondly enough to remember tasting IRA, Hop Lava, a beer called Devil’s Kitchen, and the Kolsch. All excellent beers, but I remember the Kolsch standing out the most to me. At the time no one was really making the style. and it was an unexpected surprise. I am happy to say that it caught on and is now a staple at many bars in Oregon.


Another observation from this time was checking out their bottling equipment and a 16.9oz German-style hand grenade shaped bottle they planned to distribute their beers in. This was nearly 5 years ago and it has pained me ever since that these bottles never came to fruition. I am now happy to see this becoming a reality after what feels like ages.


So, here it goes, a brief Q and A with Co-Owner Charlie Devereux wherein he reveals the brewery’s expansion plans as well as tidbits about some new beers: 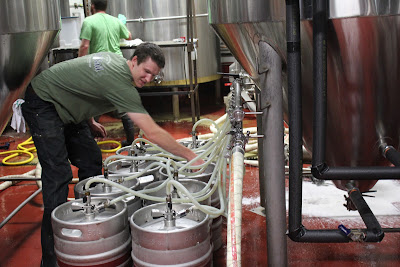 Q: Double Mountain is getting ready to celebrate its 5th anniversary. You have accomplished a lot in this time and put out an astounding amount of beer from your limited brewpub space. What made you decide that it’s finally time to expand?

Charlie Devereux: Thanks for the props… We’ve basically taken our current space to the limit, even with offsite warehousing, so it was time to either talk our neighbors at NSI (North Shore Inc., an outdoor gear supplier) into selling us their building or start planning for a whole new facility. We really like our space, especially the pub aspect, so we made the decision to pursue staying put. Fortunately we were able to negotiate a deal next door. 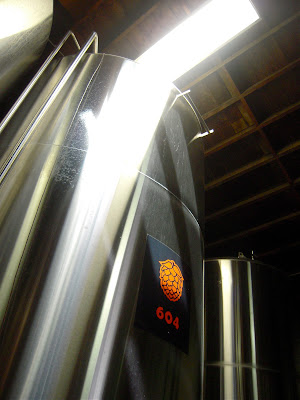 Q: What do you have in store for 2012 and your expansion?

CD: The building next door is 5,000 sf, and the plan we’re working on calls for about 25% of it to be dedicated to extra taproom seating, along the windows on Fourth Street. We’ll also convert our garage space into full-time taproom space, and expand our kitchen, too. The other 75% of the new building will be used for packaging and warehousing. We’ve put money down on a new 12-valve bottle filler from GAI that will be arriving from Italy in a month or two, and we’re getting an automated keg line as well. Our goal is to have the expansion/remodel and new equipment installation completed by the beginning of the summer tourist season, with bottles to follow sometime later in the summer. 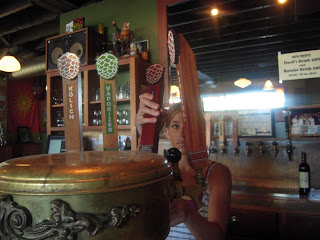 Q: You have chosen a unique size for your bottles, 16.9oz hand grenades. Why go this way instead of 6-packs, 22oz bombers, or the current trend of cans?

CD: It probably has more to do with personal preference than anything, along with the desire to do things a little bit differently, which is sort of a house rule. We think it’s a very user-friendly amount of beer for one person, and the package itself just feels good in your hand. It’s solid. We also like the fact that it’s a reusable bottle… we’re working out a plan to get our bottles returned through the wholesale channel so that we can wash them and fill them again.

Q: How many more people will the upcoming pub expansion seat?

CD: Still working on the layout, but we’re thinking we’ll up our capacity by at least 50 seats, along with some extra sidewalk seating. We’re also going to install a permanent stage so that we’re better set up for live music.

Q: With bottles on the way do you plan to expand distribution as well? Will they be carried in just specialty shops or can we expect to find them in our local Fred Meyer and New Seasons markets?

CD: It’s a little early to say, as we’re just starting the conversations with the retailers, but we expect to be pretty well-distributed, including some chains. New Seasons, definitely.

Q: What beers are you going to be bottling?

CD: The current plan is to bottle our four year-round beers (Kölsch, Vaporizer, IRA and Hop Lava) right off the bat, and to eventually bottle some seasonals at least a few times per year. Once we get the half-liter program established we’ll start working on different formats for reserve beers and the like. We’d particularly like to offer a small package for stronger beers, à la Duvel or something along those lines.

Q: What about Washington distribution or any additional markets?

CD: We’re working on growing our presence in Western Washington right now. The bottled product will definitely open up some avenues for us in new markets…. but first things first.

Q: People have started calling Bend the next Portland for how many breweries are located there. With all the new breweries in the Gorge, like the upcoming Pfriem and Solera and the recently opened Logsdon, is Hood River the next Bend?

CD: We have our own cool thing going on in the Gorge and it’s fun to have some more compadres in the neighborhood. The folks behind the three companies you mention are all talented, experienced brewers and even better people — we’re proud to support all of them. It’s a rising tide and it’s fun to be a part of it.

Q: Any other exciting projects, new beers, etc. that your looking forward to?

CD: Very excited to try “Ferocious Five”, a brown ale that’s been sitting in bourbon barrels for nearly a year — it’s a reprise of the Terrible Two we did for our second anniversary — which we’ll be tapping at the fifth anniversary party on St. Patrick’s Day. Our guys just brewed an Imperial Stout for Cheers to Belgian Beers with the Unibroue strain that had a starting gravity of around 26 Plato, so that should be extremely large. We also have a collaboration IPA in the works with our friends at Terminal Gravity called “Gravity Mountain” that’ll be hitting the streets in kegs and six-packs next month. Lots of fun stuff to keep us entertained at the moment. 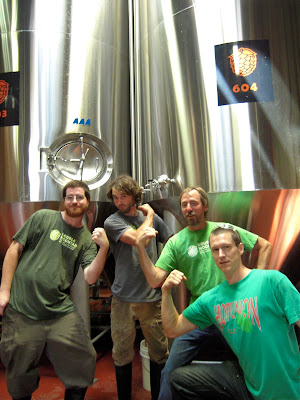