It has been a while since we did a roundup of craft beer news, but with so many little events and small news stories coming through, it is high time for another. Among the news is the first beer from a new Portland brewery, Cascade’s latest sour beer out in bottles, Powered By Yeast’s Anniversary extravaganza, a new beer & music fest, and a tantalizing Brewers Dinner.


Head Brewer Zack Beckwith sends along news that the rest of the brewery’s year round beers (Red Brick Rye, Steel Bridge Stout, and IPA) will be showing up at the taproom over the next few weeks before culminating in a grand opening party in mid-April. Zach says:

“My goal for the first few batches is to dial in our core beers by experimenting with different base malts and 2 different yeast strains. This initial batch of Pints Tavern Ale features floor malted UK Optic malt along with British Crystal and US aromatic malt. Northwest Willamette hops provide an earthy hop nose that complements the overlying nutty malt character creating a distinctly Northwest ESB style session ale.”

Also in the next few weeks, look for a Pints/Lompoc collaboration beer, Legalize Wit, that Zach brewed with Dave Fleming at New Old Lompoc for Portland Cheers to Belgian Beers. 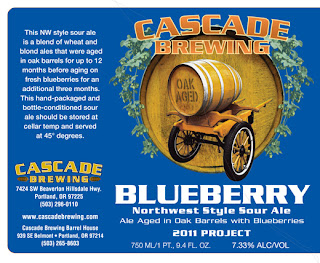 Cascade Blueberry Bottle Release
Thursday March 22nd
A brand new Cascade Brewing barrel-aged sour is to be released today, simply called Blueberry. Quite possibly the best blueberry beer ever, this sour ale has been making appearances at the Barrel House on tap. Starting at 4:30 PM the blenders will be on hand at “Blue Thursday” to answer questions, with a 1/4 bbl of the original 2010 Blueberry on tap for comparison, plus a little of the Shrieking Violet. The 2011 Blueberry is a blend of wheat and blond ales that were aged in oak barrels for up to 12 months before aging on fresh blueberries for an additional three months. Bottles sell for $17 and are available at the Barrel House, the Raccoon Lodge and online. Cascade says: 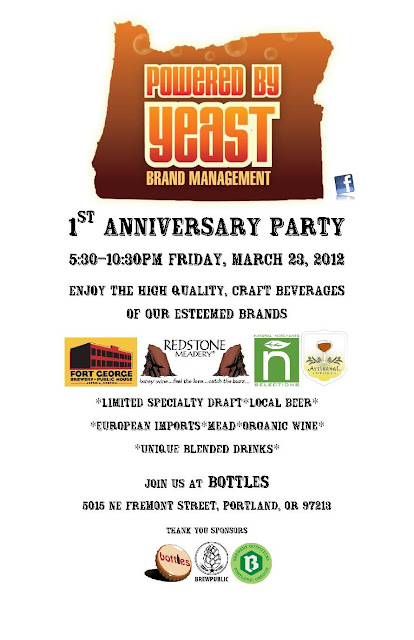 Powered By Yeast 1st Anniversary Party at Bottles
Friday March 23rd
Friend of The New School, Tim Ensign of Powered By Yeast brand management, is celebrating his new company’ first anniversary at NE Portland’s Bottles, and it should be a great party. From the presser:

Expect special rare beers, meads, & wines, including custom blended drinks! We could not have made it without our amazing producers so expect to see representation coming in from around the Country including Redstone Meadery, Artisanal Imports & Fort George Brewery!

Portland Mercury’s Malt Ball
Saturday March 24th
The Portland Mercury, the weekly newspaper, is taking a foray into craft beer events by combining it with one thing they know very well: local bands. The first Malt Ball takes place this Saturday at the Bossanova Ballroom, located across the street from Burnside Brewing.


The Malt Ball features a dozen of Portland’s best bands paired with beers from some of Oregon’s best breweries. Even cooler is that they have paired bands up with brewers to make collaboration beers for the event.


You can go here to buy Tickets for $20-$25.
Admission includes commemorative glass and four tasting tickets.


Upright Brewing Dinner at Castagna
Wednesday April 4th
Upright Brewing Owner/Brewer Alex Ganum will be at one of Portland’s finest restaurants,Castagna, for some undoubtedly masterful beer and food pairings to showcase the ease of pairing beer with modern cuisine. There will even be one course served with Fantasia Reserve. This a single-barrel version of Upright’s sour peach beer that is topped off in the barrel with white wine has never before been released to the public.


Castagna Chef Justin Woodward has prepared 4 courses, plus snacks, and each course will be paired with an Upright beer. Alex will bring his limited release seasonal beers and a special treat for dessert. Seats are $75 for the dinner on Wednesday, April 4th, at 6:30pm. Tickets are very limited, so call the dining room for reservations at (503) 231-7373.