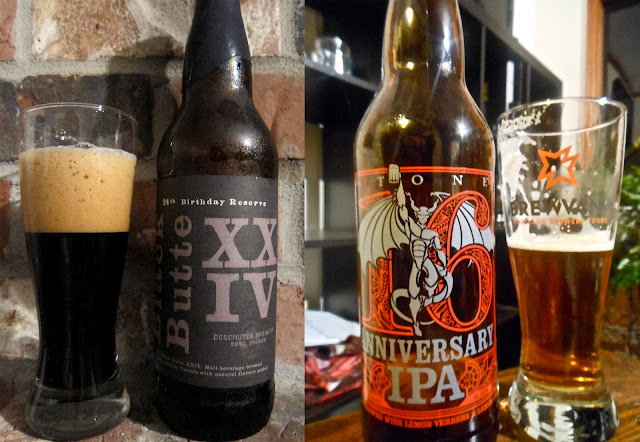 It’s been some time since we reviewed any beers on this site, and now seems as good a time as any to evaluate a couple of big new releases out now in bottles–Stone Brewing’s 16th Anniversary IPA and Deschutes Black Butte XXIV. Both beers celebrate anniversaries of sorts and are big, bold beers.

First, as a bit of disclosure, both of these beers were shipped to me for free from their respective breweries. Both were 22oz bottles that I split with The New School’s famed editor, ElGordo, who also shares his reviews below. Each beer was assigned an overall score from each of us on a 0-5 point scale in .5 increments. Now onto the reviews… 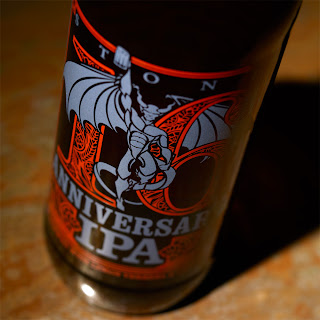 Stone’s 16th Anniversary Ale is, to no one’s surprise, a Double IPA, though it does mix things up with the use of lemon verbena and lemon oil. This is something I wish I had not known in advance, as I believe it tainted my opinion and left me looking for those flavors.

ElGordo says…
Body is a pretty bright golden-amber color topped by a small, creamy white head. Interesting nose is big on lemon verbena, citrusy hops, and a spicy note from the rye. Palate is citrusy and sweet up front. The botanical character of the lemon verbena comes through on the swallow, leaving a lingering quality of citrus and hoppy bitterness. I’m not sure what flavor the Calypso hops are bringing to the table, since I’ve only ever had them in a heavily-spiced beer. This is an interesting effort, for sure; I’ll probably buy a bottle or two, and I look forward to trying it on draft.
Score: 4 out of 5

Samurai Artist says…
Grassy and pungent citrus hops greet me on the nose, but a solventy lemon aroma is a bit distracting. It has a moderate bitterness, surprising for Stone, as I was expecting brutal bitterness. Lots more of that green grassy hop flavor–which I enjoy–rather than bittering hops. As my palate adjusts to the strong flavors, the hops take on a leafy, almost botanical lingering bitterness. The toasted crystal malt also has a strong showing. The beer has a rich, hazy orange color with lots of hop particles swirling around. The hops settle to reveal the beer as more bitter, with an apricoty hop flavor that is pretty pungenty and solventy, and I just can’t quite get into that.
Score: 3 out of 5 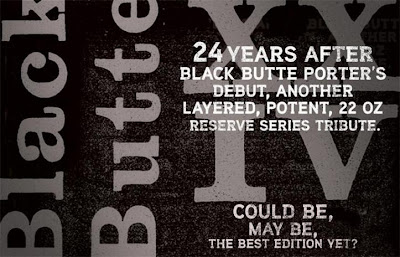 Originally based on Deschutes’ flagship Black Butte Porter, XXIV is the latest in an ongoing anniversary series of imperialized, barrel-aged, spiced and/or fruited, or otherwise fucked with versions of that beer. It has been a great and popular series of big, bold beers, and each year takes the form of an imperial stout or porter with different nuances like orange peel, barrel-aging, coffee, or chocolate added in different vintages. They make for some great cellar beers and are popular with beer geeks all over. This year’s version adds Deglet dates and figs to the mix. XXIV is described by Deschutes as…

24 years after Black Butte Porter’s debut, our potent, layered, imperial tribute returns. As usual, it’s a jazz riff, guided by the brewer’s muse and the lure of exotic ingredients. Artisanal dark chocolate nibs. Deglet dates. Mission figs. It may, possibly, hopefully, be the best edition yet. But, as it should be, you’ll be the judge of that.

ElGordo says…
Pours a deep dark brown with garnet highlights, topped by a small, creamy tan head. The nose is big on dark malts, lactose, and dark fruit, with a hint of cocoa. Palate is rich, sweet, and complex. Black figs, dates, and lactose all shine through, with a lingering heavy note of sweet cocoa. A touch of chicory comes through on the finish. Body is thick and rich, a good vehicle for the complexity of this beer. It might be a little overly sweet, but I’m still a fan.
Score: 4 out of 5

Samurai Artist says…
A big, tan, fizzy head holds up high in the glass remarkably well, with a typical, almost pitch black color. The aroma is like a chocolate malt ball. In flavor, the chocolate again largely stands out, with an underlying maltiness to the beer. Hints of musty chili powder, whole cacao beans, and chicory swirl around in the glass. The beer, while unmistakably big and warming, still hides the alcohol well and avoids being “hot” with booziness. I appreciate the beer and enjoy it, but I must admit to not being able to pull out those flavors of dates and figs, the chocolate really just overpowers everything for me. Enjoyable to the last sip, but I found Black Butte XXIV a little lacking in complexity.
Score: 3.5 out of 5