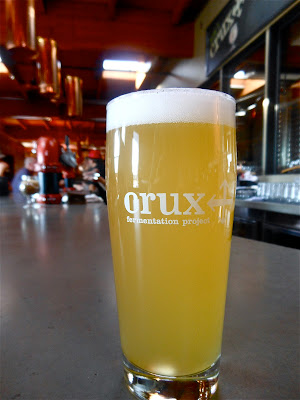 This past weekend I had a chance to visit Bend for a day trip on the Brewvana bus. The trip was primarily for The Little Woody Fest of barrel-aged beers, but I had an ulterior motive to visit my most highly anticipated new brewery of the year–Crux Fermentation Project. 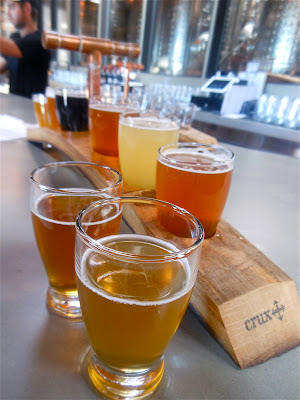 Opened just 7 weeks ago, Crux is the brainchild of ex-Deschutes Brewmaster Larry Sidor, along with an all-star team of partners in Dave Wilson and Paul Evers, whose firm TBD Advertising helped create the branding for 21st Amendment Brewing, Odell Brewing, and Deschutes. My favorite interview conducted for The New School was my two-parter with Larry Sidor just before he left Deschutes to get Crux going–read part 1 of that interview here and part 2 here.

My unplanned trip to Crux on a Saturday afternoon was an unlikely time to find any owners, but if you sit at the bar long enough, one or more of these guys will surely pop up. Making my way through all 8 of Crux’s current lineup of beers, I saw Larry pop in a back door and race around the brewery. I ran over and found him in the middle of accepting a big delivery, but when he finished up he joined me for a beer. It also just so happened that marketing guy/owner Paul Evers showed up to cover a shift bartending at the tasting room, which was slammed.

What excites me most about Crux is that Larry is still getting his feet wet in creating his own craft beers. With over 30 years in the business, he has only worked for large brewery operations. The lineup at Crux currently is centered around pale ales, and the beers come across like a kid in a candy store trying out all the flavors and combos. The pale ales on the menu showcased newish hop varieties like the popular Citra and Galaxy hops and an unnamed hop from the Tettnang region of Germany. The beers also sometimes had adjuncts like beet sugar and lactose. Larry Sidor will be quick to tell you none of these beers is a staple or year round offering. The brewery doesn’t have a flagship beer, and this really flies in the face of common marketing and branding strategy for a brewpub.

I should have known when I interviewed Larry some months ago, but with such a pro team of owners, I expected the brewery’s launch to be a straight up, by-the-numbers and perfect to a “T” opening strategy. It turns out that maybe these guys are using this opportunity to try something new. Everything from the name “Crux Fermentation Project” that does not even include the word brewing or brewery, to un-traditional logo and beers, is a bit outside the box. 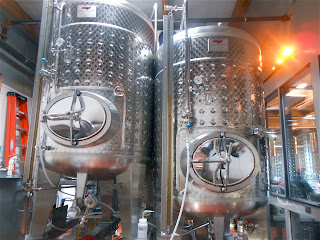 Walking around the Crux brewery and tasting room, it is clear that no expense was spared, from beautiful polished copper kettles to the windows behind the bar that open to gaze upon rows of serving vessels carefully placed on elevated 3-tier stands under their own dramatic lighting. I really liked the large brewdeck that separated the pub from packaging operation–there’s lots of space for both doing work and getting a good view. The system has enough automation to be high tech, but is also hands on enough to be fun and challenging. Also hidden just out of view are 3 open top fermentors in their own isolated room–recently filled with their first beers–should be out any day now and represent the next wave in the Crux lineup–Pilsners and, coming soon, Saisons. 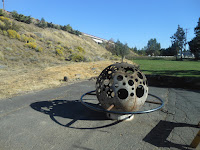 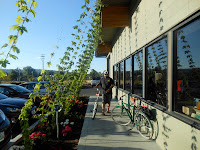 Walking around the backside of the brewery, the bottling line is ready to roll, cranking out two different sizes. More sessionable, everyday brews are in 16.9oz bottles similar to Russian River’s IPAs, and a smaller corked and caged size is for Belgian-styles. Crux even already has its own grain silo, impressive for a brewery with only an 8 hectoliter system, even more impressive is that it has been cranking out brews since opening and so far has not sold a single keg outside of the pub. This is of course a good thing in a booming industry, especially in the face of some who openly questioning whether Bend has too many breweries. I think that a pub where demand is great enough to not even have beer left to distribute shows how the industry still has room to grow. Of course, this is all just Phase One. With time will come an expansion and a much larger brewhouse that will allow the current brewpub to become the R & D brewery. 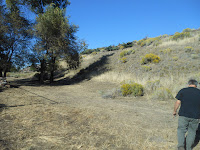 The pub itself is also in just Phase One, with its next expansion happening soon–the patio addition of the Crux dogpark. Outside the doors of Crux is a cement patio with a fire pit, just at the base of a hill that runs up to the hideaway and a grassy field that extends towards the train tracks some 50 yards away. A large portion of this will be cordoned off for dogs, outdoor kids play area, games like giant jenga, and possibly even a disc golf course. Even more ambitious are plans for an outdoor stage built onto the side of the hill, possibly framed on a train boxcar carriage. Soon you will be able to catch an outdoor concert lying in the grass outside of the brewery with craft beers within reach. I for one can’t wait to see what else Crux has in store for us.