beers made by walking belmont station

This Saturday Beers Made By Walking comes to Belmont Station, the 5th in a series of unique events that ask brewers to make beers inspired by plants found on nature hikes. BMBW’s founder, Eric Steen, is an artist and teacher who first put together one of my favorite events of recent years, bringing beer to the Portland Art Museum as part of the Shine A Light event. Now relocated to Colorado Springs, he has started a successful new blog called Focus on The Beer and has become an event coordinator of note with the Beers Made By Walking project and more. On Saturday October 20th, he returns to PDX with 5 different beers from Oregon breweries Coaliton, Deschutes, Flat Tail, Standing Stone, and Upright inspired by each brewer’s own nature hikes. Below is an interview with one of the more creative voices in craft beer, Eric Steen.

As a fellow craft beer enthusiast as well as blogger and artist, Eric and I have a lot in common. While studying art in the Bay Area I also discovered that “drinking beer with friends” is the greatest form of art. Below are 5 questions with fellow craft beer lover and social artist Eric Steen, along with photos taken during previous BMBW adventures.

Q: You are a social artist, how would you define that to the layman?

Eric: For me what this means is that I intentionally create events that in some way challenge people to see the world through a new set of lenses. I think this is one function of art, but instead of doing this through the studio arts (by creating paintings, drawing, and sculpture), I often use our own experiences in everyday life as my medium. So, an example could be Beers Made By Walking. This program was started as an art project last year through the Galleries of Contemporary Arts in Colorado Springs. I saw it as art because I purposefully created walks where people could learn what plants are on the trail and then use their creativity to translate their knowledge and create new beers that use the landscape. I saw it as some expanded form of landscape painting.

Does that make sense?

Q: Is beer a social art, a science, or a craft?

Eric: It’s all three, for sure! I don’t think anyone would disagree about the science and craft aspect. For me, though, I like this third layer that beer is like sculpture, or even more we could say it is some kind of social-sculpture or something. The idea of togetherness, relationships, and community seems to be part of the entire idea, production, and consumption of good beer. Drinking a pint with someone is an action that simultaneously loosens barriers and strengthens relationships. Tom Marioni, a Bay Area conceptual artist, once said that “The act of drinking beer with friends is the highest form of art.” 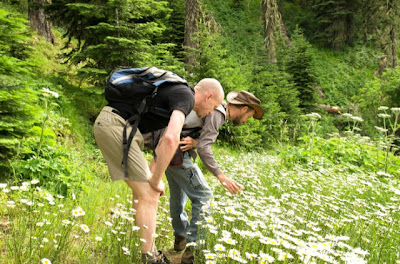 Q: What inspired the Beers Made By Walking project?

Eric: The initial inspiration for BMBW came during a week long canoe trip down the Yukon River in Canada. There I was introduced to the Norwegian term ‘friluftsliv,’ which is translated as ‘Free Air Living.’ The term describes a way of living in which people make a habit of being outdoors on a regular basis. There are Friluftsliv conferences that host ‘walking lectures’ where attendees hike for a few days on end, stopping every now and again for a lecture and food.

The program’s concept developed further during a trip to Scotland, when I built a pop-up pub that served homebrewed beer to the public. While there, I visited Williams Bros. Brewing in Alloa and was inspired by their line-up of historic Scottish beers that used ingredients from the landscape – like heather flower, gale, Scottish pine, and seaweed. Another inspiration came from British artists like Richard Long and Hamish Fulton, who use walking as a means of understanding our relationship to the world. Beers Made By Walking, in some respects, is a mashing together of those things. 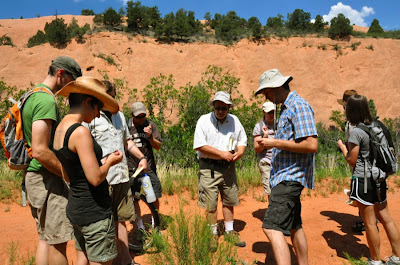 Q: For people curious about BMBW and wondering if it’s worth their time, what would you tell them and what do you hope they take away from the event?

Eric: You’ll get to try five highly experimental beers that were inspired by the beautiful state of Oregon. . . The five walks/hikes took place in five different parts of Oregon (Ashland, Corvallis, outside Bend, Portland, and the Mt. Hood National Forest). The beers are literally influenced and built based on specific trails the brewers walked on. It’s like drinking in the landscape. Many of the ingredients used are untested and/or non-traditional in contemporary brewing.

Q: What has been the most memorable beer to come out of the BMBW project so far?

Eric: It’s really difficult to choose a single favorite now that I’ve had four events (the one in Portland is number five). The more I think about it, the one that stands tallest may be the 4% sour mash Chokecherry Kriek, which was originally brewed by Scott Simmons and rebrewed through Pikes Peak Brewing in Monument, CO. The beer had 100% lacto and was slightly tart, complemented by the tart nature and semi-sweetness of the chokecherry ,and the dry finish made this beer a really beautifully-designed brew. All of the beers have been really interesting in various ways, but a couple of others that stood out to me include the rose hip and sumac Saison; the Belgian Pale Ale with wild fresh hops and rose hips; the Saison with chokecherry, juniper and yarrow from Ska; and I also really liked the Prickly Pear Cactus Golden Ale from Oskar Blues.

Dont miss the Beers Made By Walking project this Saturday at Belmont Station from 3-8pm.
Try the beers and meet the brewers