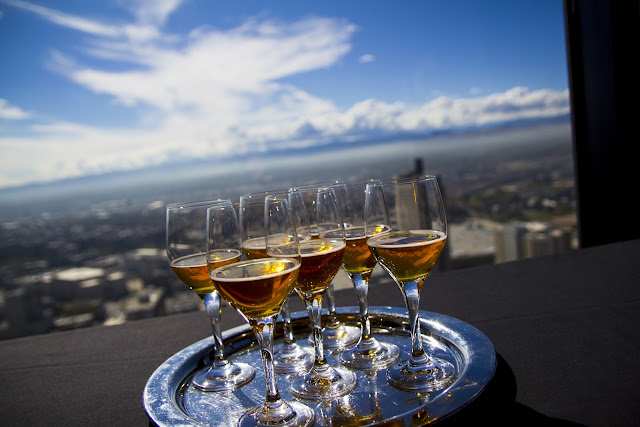 Denver, aka the Mile High City, is arguably the best beer city in the country. Home of the Great American Brewers Festival, the Brewers Association, and more breweries and pubs than you can shake a stick at, it’s unarguably in the Top 5 US beer cities. I made my first visit recently for the aforementioned GABF, and in my 5 day trip I visited 6 breweries in Denver and as many taphouses, plus another 3 breweries in Fort Collins, about an hour out of the city. I also attended media events and behind-the-scenes parties put on by the Brewers Association and others, and I learned two things: Denver is an inferior beer city to Portland and that the future of American Craft Beer lies in the progress of craft beer-loving foodies and homebrewers. 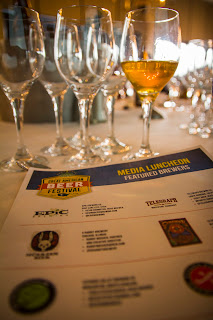 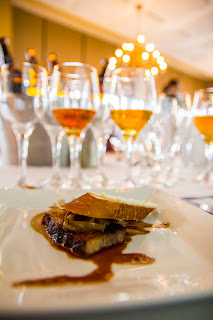 One of the highlights of the trip was a media luncheon held by the Brewers Association where we lucked out getting a table with these guys (below: Charlie Papazian, Colorado Gov. John Hickenlooper, Sam Calagione). Here we were treated to an amazing coursed and paired brewers lunch, with every pairing featuring a different brewery and each brewer getting up to the podium to speak about their small brewery, each of them in a different state of play. Kevin Krompton of Epic Ales in Salt Lake City dropped the astounding news that his brewery is running 24/7 to produce between 15,000 and 20,000 barrels a year on just a 10bbl brewhouse. Epic also bottles virtually all of its beer to get around Utah’s stilted alcohol laws.

Governor John Hickenlooper gave a great speech about craft brewers’ and drinkers’ associations with politics. Being a Democrat, he didn’t shy away from plugging Obama and, noting that he is not up for reelection, he dropped some partisan humorous disses on the red states, pointing to data that says only 10% of Republicans are craft beer drinkers.

The most revealing talk, though, came from New Belgium Brewing’s founder and president, Kim Jordan, who dropped news that the Brewers Association once considered dropping homebrewers from its ranks. Apparently as the modern brewery boom was starting up, with record numbers of pros joining the Brewers Association’s ranks, there was discussion that it wasn’t the place for amateurs. Some in the board wanted to cast off the homebrewers to let them find their own way. That’s quite a shocking stance, considering the BA’s founder, Charlie Papazian, is the most famous homebrewer of all-time. Fortunately, homebrewing proponents like Kim Jordan demanded better, and they instead spun off the American Homebrewers Association, which exists as its own entity but is tied to and largely ran by the BA. It’s hard to imagine an industry where the homebrewers are not welcomed, today it is quite the opposite, with a large booth at the GABF for the Pro-Am competition entries, all of which are professionally made beers based upon homebrewers’ recipes. As the Pro-Am booth was described to me, it’s all beers inspired by home brewers, to which I remarked, “aren’t they all?” 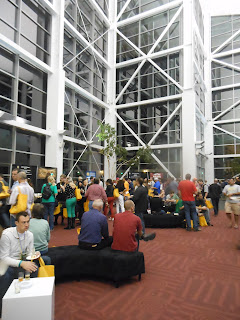 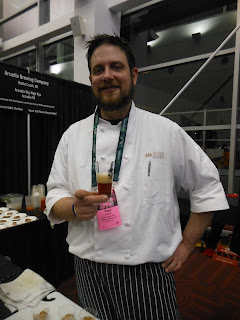 As an occasional writer for the Brewers Association’s public outreach arm, CraftBeer.com, I know that the BA is big on promoting food as an accompaniment to beer and vice versa. As Full Sail CEO Irene Firmat pointed out, too long has craft brewing ceded ground to winemakers as the sole alcoholic beverage that pairs well with food, especially cheese and chocolate. 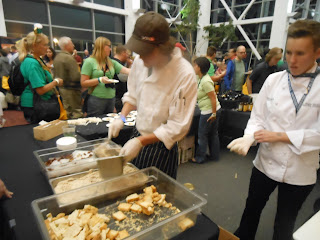 The Great American Brewers Festival doubled down on craft beer and food’s intersection with the debut of two new sections of the festival, the Brewpub Pavilion and the Farm to Table Pavilion. The brewpub area was located in a cordoned off section in the center of the festival floor that was still open to the public. Because the pavilion was roped off, though, I think a lot of people did not venture in there because they weren’t sure if it was a special section and just anyone could enter. Inside, brewpubs from around the country were pouring samples of their beer paired up with small plates of food for an additional charge. It was a bit of a cluster in there, so I must admit I tried nothing. 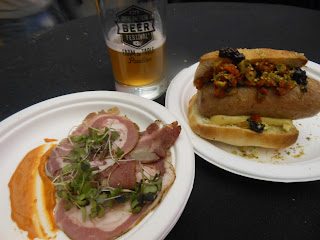 I did, however, spend quite a bit of timein the well-hidden Farm to Table Pavilion. In a secluded hall behind the main festival room, behind guarded double doors that required a special ticket to get through, was an oasis of serene music and fantastic brewer and chef pairings. 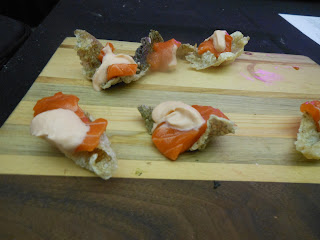 Here food and beer connoisseurs, brewers, and media snacked and mingled with top chefs and brewers who each offered 2 beer and food pairings at booths around the room. Each booth had cooks on site preparing platters of food, and most had the resident brewmaster and top chef there to talk about each creation. A very meat-centric lineup of small plates, rich, creamy and spicy sauces, fresh greens, and raw fish were all heavily featured. Many of the nation’s top brewers were highlighted, including Firestone Walker, where Matt Bryndilson teamed up with the cooking team from the Monk’s Kettle in SF, and recent big GABF award winners like Devil’s Backbone and Sun King. The Pacific NW was woefully under-represented, though, with no Oregon or Washington brewers at all. Alaskan Brewing was the only representative from our corner of the country, though our own beer dinner master chef, Paul Kasten from NW Portland’s Wildwood, was representing. Does this say something about our food and restaurant scene that we don’t value beer and food pairings enough? Perhaps, but the bias towards midwest brewers may have simply been bad luck. From speaking to local brewers about the Farm to Table Pavilion, most had never even heard about it, and I think more than a few will be looking to enter next year.

My overall takeaway: Oregon could really step up in both the homebrewing communities and more respect for beer at the dinner table. Recently, at the American Homebrewers Conference, the Oregon homebrewing community walked away with no competition wins, while clubs all over the rest of the country racked up wins. There was almost no one representing Oregon at all. Recent high end restaurant openings in PDX have put beer on the backburner while hiring sommeliers and mixologists to head up the alcohol programs. It’s time for our local scene to step up its game when it comes to mixing beer and high-end cuisine.