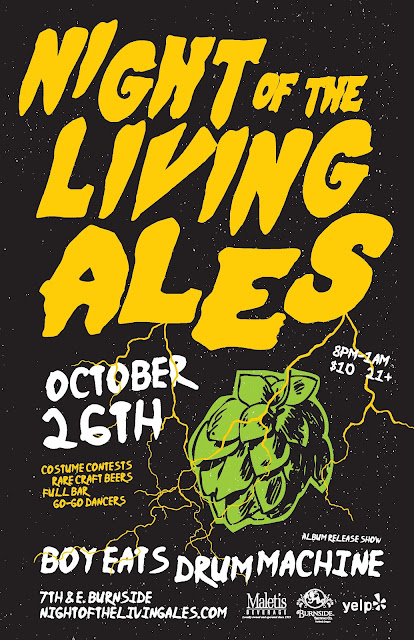 The 3rd annual Night of the Living Ales is coming up this Friday, October 26th. More than just a Halloween party for craft beer lovers, it features the album release show for local favorite musician Boy Eats Drum Machine as well as guest bands Oh, Darling and Purse Candy. In addition to a full bar inside Burnside Brewery, the outdoor tented venue on E. Burnside and 7th will feature inspired draft beers that you won’t find anywhere else.To top that off there will be Binders full of Women, the Sinferno Go-Go Dancers who will be all dressed up for Halloween and shimmying on and around the stage to the nights music. 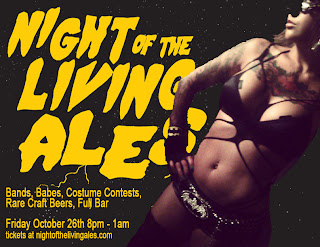 Burnside Brewing has created an Almond Joy beer with chocolate and toasted coconut and almonds; Gigantic Brewing is making a special Tangerine and Habanero infused Belgian Pale Ale, Lompoc is making a special rosemary stout; Upright Brewing has teamed up with Bushwhacker Cidery to create a special hybrid blend; Ninkasi is bringing a barrel-aged porter; and Oakshire Brewing will provide a vanilla bean-infused version of its Big Black Jack, a chocolate pumpkin imperial porter.

If Boy Eats Drum Machine’s rare live appearance (the only one this year) was not enough, the night’s entertainment will include performances by the Sinferno Go-Go Dancers and magic from local mixologist Jacob Grier, who specializes in street magic.

If you missed the previous two years of Night of the Living Ales, you don’t want to miss this one. Check out my recap of year one and year two here.