This Black Friday–the day after Thanksgiving–is the release of Upright Brewing’s “Untitled,” a beer inspired by the seminal D.C. punk band Bad Brains.It’s sort of a companion piece to 2010’s untitled “Clash” beer. Both beers make up a new punk rock tribute series that will see releases rotate, with a new one coming out every other year. So, 2012 will be “Untitled” Bad Brains and 2013 will see The Clash tribute resurface.

But I digress. The “Untitled” beer is a strong dark lager that comes off like a lager version of a Cascadian Dark Ale in some ways. The bottle artwork–designed by yours truly–is in the same minimal colors of the previous Clash tribute beer, this time adopting Bad Brains’ rastafarian red, yellow, and green. and the band’s trademark imagery that includes a lightning bolt. I am also excited that we will have brand new limited edition Upright Brewing t-shirts bearing the new artwork.

“Untitled” Bad Brains uses a nearly identical recipe to the original “Clash” beer, but with just enough highly roasted malts to lend it a very dark brown color. It is hopped with Perle, Liberty, and Tettnanger varieties, but stays smooth all around. It also has the distinction of being the first true lager fermented in one of Upright’s open tanks and clocks in at 6.4% abv.

The release party on Friday, 11/23, at Saraveza’s newly remodeled Bad Habit Room has a lot going on. In addition to the bottle release party with bottle sales to go, the beer will be on tap alongside one of the last kegs of Lactovasilios (barrel fermented Berliner-Weisse) and the new batch of Todo Modo (session saison) and the “Untitled” beer itself. Also, the brand new Bad Brains album “Into the Future,” released this week on Megaforce Records, will be playing, and the band’s documentary “A Band in DC” will be screening. Meet Upright Brewing’s Brewer/Owner Alex Ganum, Point Blank Distributing’sMorgan Torngren-Tatman, who conceptualized the beer, and myself, the artist.

Certainly this is a better way to spend your Black Friday than in some big box department store, no? 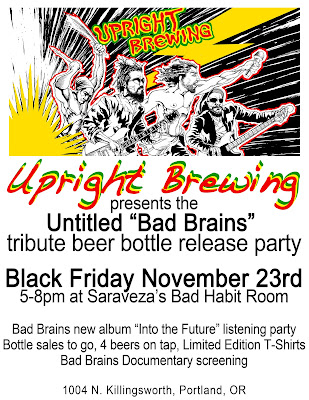 About Upright Brewing:
Upright Brewing specializes in farmhouse inspired beers rooted in France and Belgium made with local ingredients and a Pacific Northwest twist, while also dabbling in both classic and quirky projects from around the world. The name is a reference to Charles Mingus and his primary instrument. Mingus was a musician whose compositions defy categorization. At Upright the recipes and processes are decidedly unbound, making for a true hybrid style that shares Mingus’ spirit of exercising creativity and craft.
240 N Broadway suite two, Portland OR 97227 | (503) 735-5337 | uprightbrewing@gmail.com
http://www.uprightbrewing.com/

About Bad Brains:
Considered to be the “holy grail” of punk rock, Bad Brains are one of the definitive American punk groups who garner the same respect as Sex Pistols, Black Flag, The Ramones, and The Clash. It’s a return to form for the band that helped define American Punk and Hardcore music. http://www.badbrains.com/

“This album takes us back to self-produced record shines with Bad Brains’ true sense of freedom and musical experimentation, with blends of soulful backgrounds meshed with blistering hardcore and metal riffs, with classic dub,” says Darryl Jenifer of Bad Brains.

“Into The Future is the purest Bad Brains recordings since the ROIR cassette.”
— Dr. Know