It’s only 2 days until Thanksgiving now, and, as usual, I have procrastinated on my annual duties of prepping dishes. But like any good beer geek, I have planned the craft beer portion of the holiday well in advance. Like Bill at the It’s Pub Night blog, I have become a skeptic about cooking with beer as an ingredient. Beer Can Chicken has been shown to be a very bad idea, and I am not sure that a brownie mixed with chocolate stout is actually better than the real chocolate added to it. This is not to say that all cooking with beer is bad;The Beer Goddess’s Cranberry Sauce made with Fruit Lambic comes out great, and adding some Schlenkerla Rauchbier to your baked beans is a can’t miss. All I am saying is think twice before you pour a bottle of a little-known imperial stout into your homemade beer cheese soup (as I did in 2007 with a little beer called The Abyss). As Bill pointed out last year, is any food really any tastier using a bottle of The Dissident in the mix, or would the same beer taste even better down your gullet?

Now, I am no chef, but I do happen to know a thing or two about pairing flavors and recipes. I have been tasked with providing beer for many a Thanksgiving dinne,r a duty I don’t take lightly. The hardest part about beer and food pairing is avoiding the obvious; just because two items may taste similar does not necessarily make either one taste any better when they are paired together. 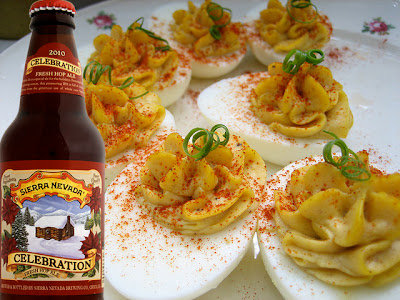 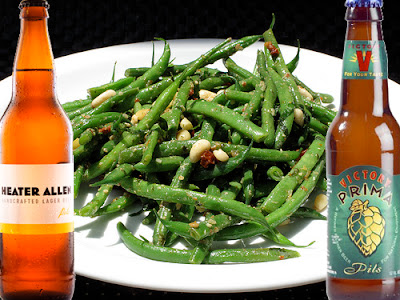 Green Beans/Brussel Sprouts/Asparagus
Pairing: Heater Allen Pils/Upright Engelberg Pils/Victory Prima Pils
All of these dishes are chewy, usually cooked green vegetables and, more importantly, none of them are all that flavorful by themselves. Butter, garlic, and oil are all common additions to the popular cooked vegetable side dish to add a bit of flavor. It is ironic that the healthiest dish on the dinner table is cooked, which removes key nutrients and adds tons of fat via the butter and oil, but that’s beside the point. To cut through the oil, I recommend a light grassy pale ale or a hoppy lager. You want a lighter beer with a nice carbonation and frothy head that will cut the fatty oils and wash everything down. The spicy hops complement the greens and add some much needed spice. 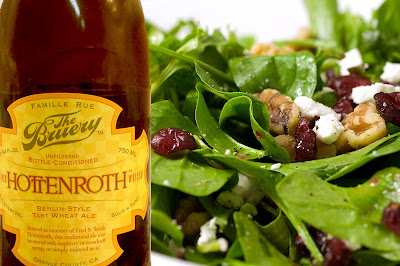 Salad
Pairing: Berliner-Weiss/Gose
The staple veggie appetizer comes in many forms, from the classic greens with oil and vinegar to fruit salad, or the more seasonally appropriate cranberry, walnut, and blue cheese versions. It doesn’t matter which is served, because a light tart or fruity beer such as a gose or Berliner-Weiss is just the ticket. Being a light dish, salad can be easily overpowered, so don’t slap it around and make it call you Shirley. Almost all salads have a tangy element, be it vinegar, lemon, or cranberries. Complement that with a bright, acidic, effervescent beer, and a boring appetizer becomes astonishing. The light low alcohol of a gose or Berliner-Weiss also will leave you thirsty and hungry for more, just like a good salad should do–it’s there to stimulate your appetite. The Bruery’s Hottenroth Berliner-Weiss is available now in bottles. You may also be able to find a traditional German version, or you can take it in a different direction with a bottle of Dogfish Head’s Festina Peche. 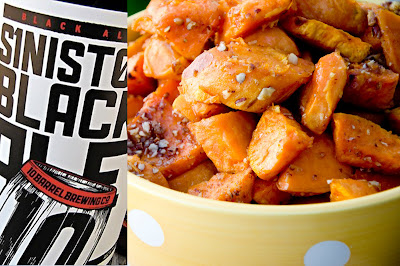 Sweet Potatoes/Yams
Pairing: 10 Barrel Sinistor Black Ale
Ahh, gross. I hate sweet potatoes and yams, but if you’re not like me (or maybe if you’re just like me), you will need a tasty beer to wash the sweet, maple-glazed starchy spuds down. The last thing you want to do here is pair with a sweet or a light beer. You need something both dry and relatively bold, but you don’t want to blow your load with something high alcohol, asyou have a lot more eating to do. Thus, a beer like 10 Barrel Brewing’s Sinistor Black Ale is perfect; it’s relatively dry and roasty, with a light hoppiness, yet is only 5.4% abv. 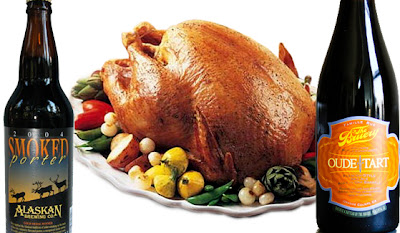 Option #1 Alaskan Smoked Porter: Now is the part where you ignore what I said before. Do yourself a favor and make the obvious choice by picking up a bottle of the latest vintage of Alaskan Smoked Porter. No doubt, it’s the most versatile pick for a Thanksgiving dinner. Even if you’re not crazy about smoked beers, this is the time to give them a second shot. Made from a proprietary blend of cold and hot smoked malt by the brewery itself–the malt was once smoked at the neighboring seafood smoker–Alaskan Smoked Porter goes great with almost anything savory.

Option #2 The Bruery Oude Tart: Not a fan of smoky beers? The less obvious but equally delicious pairing is a slightly sweet but fruity and sour beer like The Bruery’s Oude Tart, which is a bit of a hybrid Flanders Red and Kriek. Other good replacement options would be Cascade Kriek orDuchesse de Bourgogne. 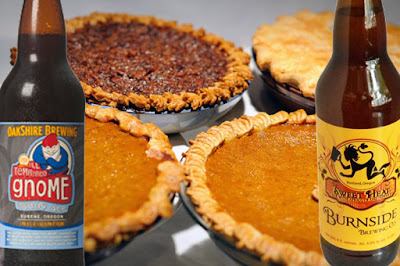 Dessert
Pairing: Burnside Sweet Heat or Oakshire Ill-Tempered Gnome
I assume you’re eating a pie for Thanksgiving dessert, so the only question is what kind of pie: fruit, pumpkin, or nut. Thus, I have two very different beer pairing suggestions. An apple, cherry, or any other kind of sweet tart fruit pie is going to go excellent with Burnside Brewing’s newly bottled Sweet Heat (apricot and Scotch Bonnet pepper wheat beer). True, the pairing suggestion somewhat goes against my suggestion of matching the obvious (fruit beer with fruit pie), but the added spicy hot and Caribbean-esque addition of Scotch Bonnet peppers and sessionable quality (only 4.9% abv) of Sweet Heat makes it a truly perfect pairing.

If you’re going with the classic pumpkin nut pie, then going local with Oakshire Brewing’s Ill Tempered Gnome–an imperial brown ale–is a can’t miss. While ITG is a bigger beer, it’s balanced with copious amounts of spicy hops to balance the bitterness with a chewy and nutty malt profile. It’s more balanced than going with the obvious dessert and stout pairing that will usually simply leave you in a sugar coma.