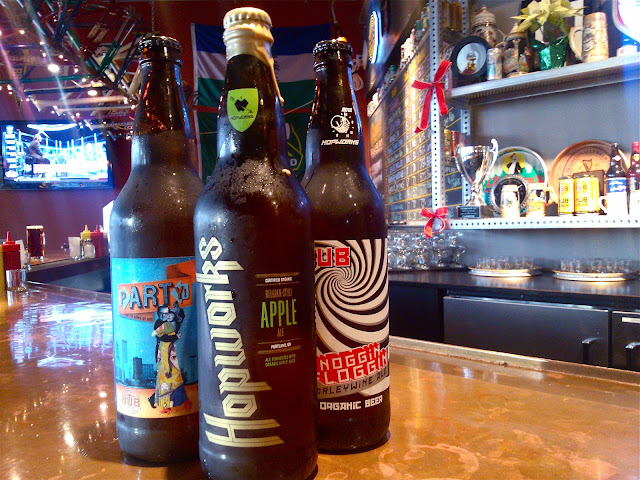 Hopworks Urban Brewery has a trio of new bottles on sale at its brewpubs, and two of them will be hitting stores shortly. One is a GABF medal winner and limited to only about 6 cases, and the other the 3rd release in the breweries premium wax dipped Abbey-style line of beers. 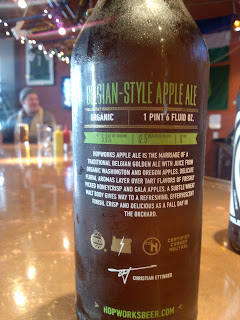 The beer I am most excited about is the first ever bottling of Hopworks Belgian-style Apple Ale. If I am not mistaken, this is the 4th version of an apple beer. The first two were also Belgian style draft-only beers, and earlier this year there was a German-style Weisse brewed with apples for the Portland Fruit Beer Festival. This should be the most accomplished version yet, and, as I was told all the Abbey line of bottles are bottle conditioned, the yeast should benefit the beer and possibly even allow for some cellaring. I haven’t cracked mine yet, but the hope is for a fine champagne-like carbonation and dry finish. Unlike past releases, this beer is bottle-only this year. 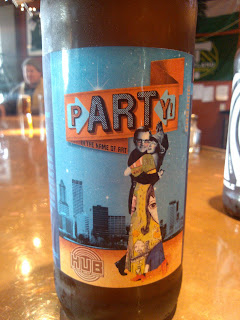 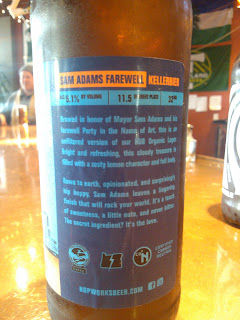 The very limited bottle release is dubbed “Party!” on the front and features an artwork collage and an image of Portland mayor Sam Adams dancing. The beer is actually Hopworks Kellerbier, which just walked away with a bronze medal at the Great American Beer Festival. The Kellerbier is an unfiltered variation of  HUB Organic Lager with a fuller body and some lemony characteristics provided by the unfiltered yeast. This super limited bottling was done just for Mayor Sam Adams going away party last week before he steps down as mayor. Thus, this bottle may be a collector’s item. Regardless, the Kellerbier is a great brew and there are only about 6 cases of this on sale at Hopworks on Powell. 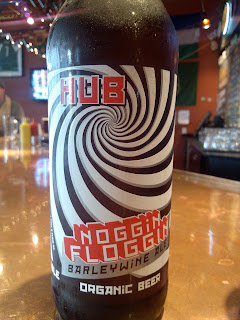 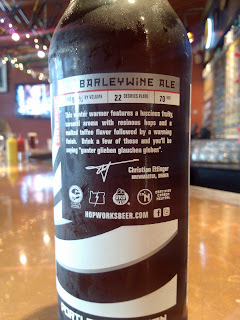 Last is the annual release of Noggin Floggin Barleywine. Like most Hopworks beers, the Noggin Floggin doesn’t disappoint hop lovers with its resinous fruity and citrusy aroma. It’s backed up by malted toffee flavor and a warming finish. It makes for a great cellar beer at 11% Abv and 70 IBU’s.

Also, if you make it in to either Hopworks locations soon, you can try the new release of Noggin Floggin on draft or Cultivator Dopplebock, a warming lager packed with notes of raisin and fig layered over bready, toasty malt flavors.

Hopworks Urban Brewery is located at 2944 SE Powell and Hopworks BikeBar is at 3947 N. Williams