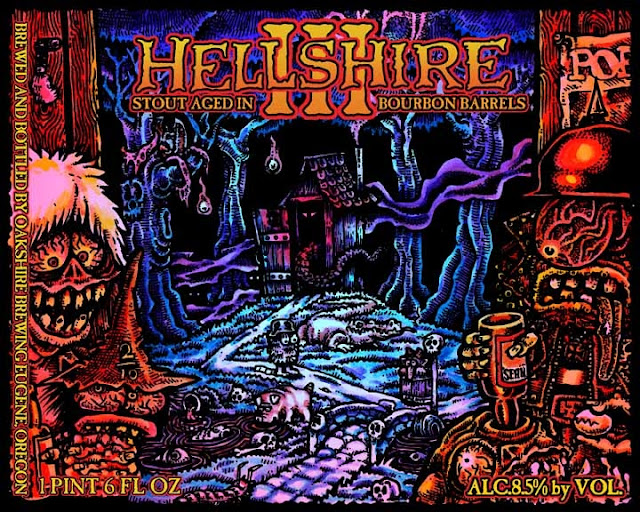 Oakshire Brewing will release its 3rd annual barrel-aged Imperial Stout under the Hellshire III name on Saturday, February 16th. The first Hellshire, released during the 2011 Eugene Beer Week, was met with great reviews and high beer geek demand for a limited product. Unfortunately, Hellshire II was marred by a slight lactobacillus contamination. No doubt Hellshire III will bring the series back on track after already winning a Gold Medal in November at Chicago’s annual Festival of Wood & Barrel Aged Beer. Hellshire III a Foreign Style Stout aged for nearly a year in bourbon barrels from Heaven Hills Distillery in Kentucky.

Sales of the 22oz wax dipped bottles will begin at 10am in the tasting room on Madera Street during the Oregon Brewers Guild Zwickelmania event.

“We’re really excited to release Hellshire III after a long layoff from our Hellshire series” said Brewmaster Matt Van Wyk. “We learned a lot from the Hellshire II ‘speed bump’, and after winning a Gold Medal with this Beer in Chicago, it lets me know we’re back on track. Hellshire III is the best of the series so far.”

During the Hellshire III release party on February 16th, Oakshire will also sell vintage Brewer’s Reserve Series beers and Hellshire I in very limited quantities. Other specialty barrel-aged beers will be available on draught throughout the day. Live music will be provided by local bluegrass band Whiskey Chasers and food will be available for purchase from Delacata – voted Best Food Cart of Eugene 2012.

Hellshire III will be sold at Oakshire Brewing during dock sale hours starting on Saturday, February 16th from 10a-5p. The 22oz bottles will sell for $15 each and supplies are limited to roughly 140 cases.