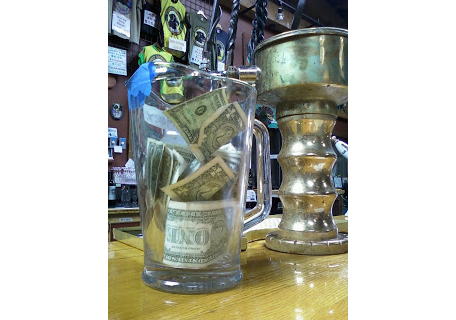 In last month’s column I decried Beer Confusion — ignorant service at bars with a focus on beer. To show that I’m an equal opportunity crank, this month I want to take the side of the hardworking bartenders and beer servers, and get all you cheapskates out there tipping properly.

A few short years ago I was in the same benighted state as a lot of you are: rounding up to $5 on $4.50 pints, or throwing down a buck when I bought a round of three or four beers. Luckily I asked for some advice on the matter, and got caught up on modern American beer tipping etiquette. Now I am going to drop all that knowledge on you, in the form of an easily digested list of Frequently Asked Questions. Share it with your chintzy friends, and for God’s sake email this FAQ to your parents right away.

Q: How much should I tip for a beer?

A: Tip $1 per beer. Pint, half-pint, goblet, boot, whatever. This is the rule for any individual drink at the bar: $1. Tip even more if you got some special attention, like free tastes.

A: You got a cheap beer and you’re worried about tipping too much? Tip $1 for that cheap beer.

A: Yes. Tip $1 for that expensive beer. Listen, the bar is paying the server sub-minimum wage [Correction: on the West Coast, the server is making at least minimum wage ($8.80/hour, or $17.6K/year at 40 hours/week). Some states allow sub-minimum wages for restaurant jobs.] whether the beer is cheap or expensive. Pay up.

Q: I ran a tab, and had a bunch of food and drinks on it by the end of the night. How much should I tip?

A: Tip at least 20% of the bill. Don’t be afraid to go over 20% by a little. If you got any freebies, or got comped for some things, add those to the total for the purposes of figuring the tip.

Q: I bought a pitcher instead of individual pints. How much should I tip?

Q: Should I put the tip on the credit card, or tip with cash?

A: If you can, cash tips are better for the workers because they get divided up by those on duty at the time — at many places the credit card tips are averaged for the week and distributed based on the number of hours worked. That said, it’s all appreciated, so a credit card tip is better than a weak cash tip.

Don’t try to weasel out of it

Q: This place is so cool that I was served by the owner herself. Should I tip less?

A: No. Tip normally. If the owner is working instead of sitting on the beach, she might be making less money per hour than her employees. For another thing, tips are usually shared by everyone on duty at the time, so you’re holding back from everyone, not just the owner. Finally, if an owner thinks you’re being to generous, he has it in his power to make it up to you. Wouldn’t you like to get on the good side of the owner of a cool beer bar?

Q: The service was slow, or surly, or otherwise inferior. Should I tip less?

A: No. This is difficult to understand at first, but tipping in America is not compensation for a job well done, it’s just compensation, period. You don’t think that makes any sense? I don’t either, but that’s the system we have. Maybe you don’t like the system, but it won’t get changed simply by you welching on your end of the deal. Can’t stand to tip for bad service? Then stay home, serve your own damn beer to your own damn self, and save a bunch of money.

Q: I insist that I must teach the server a lesson for this bad service. By withholding the tip, or tipping a single penny, I will teach him to do a better job next time. What’s wrong with that?

A: There are a lot of things wrong with that:

Even if you were treated badly, be big and fulfill your end of the deal. You will feel better about it in the long run, and you can just put the episode behind you instead of carrying it around like some perverse badge of victimhood.

A: Look, I didn’t make up this system, I’m just describing to you how to fit in to it. The Burgerville wages are what they are; bartending wages are set artificially low, with customer tips to make up the difference. Also, your bartender (at least here in Oregon) has to be licensed by the state, which implies following some rules on who to serve and how much. The bartender has more messes to clean and more cranky drunks to deal with. In short, the two jobs are not the same. Pay up.

Note that these rules don’t apply in much of the civilized world, where the service is part of your bill. Hell, that’s how it is in most of the uncivilized world also — it seems like the USA is the only place with this insane system of leaving part of the server’s wage up to the customer’s ill-informed and miserly discretion. It’s what we have, so if you want to enjoy a night out drinking beer, play by the rules.

Tip your bartender. Don’t be like this jackass and claim that Jesus told you not to tip.

For the last several years Bill Night has been writing a Portland-centric beer blog called It’s Pub Night, named after the ritual weekly phone call or email rounding up friends for a night out: “Hey, it’s pub night!”. Despite his advanced age, he is lending a hand to the New School with a monthly rant called “Piss and Vinegar”. The name of the column comes from the British colloquial phrase “taking the piss” — making fun — and the sour character of Bill’s rants. He will continue to maintain It’s Pub Night, and he invites you to take a look at some of the fun things over there, like the Beer Review Generator, the Portland Beer Price Index, and the Six-Pack Equivalent Calculator.