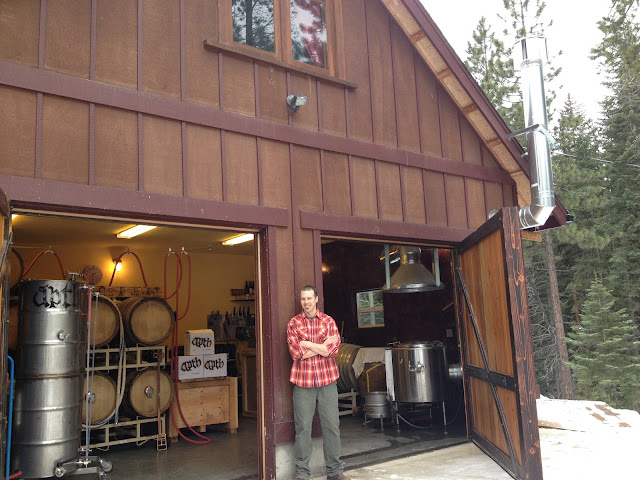 The Ale Apothecary will never be a spot on the well-trodden/sloshy Bend Ale Trail. It’s ten miles out of downtown way up in the mountains. There’s no pub. No merch wall. Founder Paul Arney is a man who, after 15 years at Deschutes working his way up to assistant brewmaster, set up his own brewery and has the finished Finnish kuurna to show for it.

I guess before I get to the family history of pharmacists, I should explain that the kuurna looks like a trough or even a canoe that Paul and some very helpful friends hand-carved over a few months out of an Englemann Spruce tree from his property above Bend, where a full dozen breweries call home. The kuurna is used as a mash tun—it holds about two barrels by volume—for his Finnish-style Sahati ale and is indicative of how every little thing is done by hand. But more on that in a minute.
So yeah, Paul’s mom married a pharmacist. Druggists goes back three generations in his family. And while Paul’s not a pharmacist, the recipes he alchemizes tend to put his patients, er, patrons, in good spirits. “I do have this family lineage of people who go out in the land and gather stuff to make people feel better,” he said.
Paul said his dad never pressured him to follow in his footsteps. “He saw the writing on the wall. There’s no future in running a small drug store” the way his antecedents had. The sad irony, of course, is that there certainly was no future in operating your own brewing company in that same era when the industry was hell-bent on consolidation in exactly the same way Walmart, Walgreen’s, Kroger, and the like have obliterated indie apothecaries. 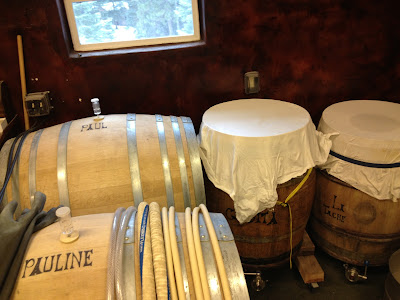 On the flipside, young Paul was pressured into pursuing the sciences. “Being creative wasn’t encouraged.” Despite an undergraduate degree in geology, “At heart,” he declared, “I’m driven to be an artist.”
As an undergrad, a chance encounter with a brewer up in Washington led him to become interested in and pursue his livelihood in brewing. The extract brewing he’d done with his father wasn’t exactly career-worthy stuff, but while studying at UC Davis’s elite brewing program, Arney fired off letters to some 300 breweries around the Pacific Northwest. Deschutes was one of only two to respond (and with a job offer, no less). That’s part of the reason we have beers like their Flemish Brown-style The Dissident.
Leaping into the future, in March, 2011, his first blog post for his new enterprise was titled Artisanal Manifesto (Hello world). Here’s an excerpt: 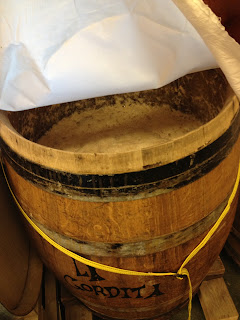 I have a concept for a modern brewery. ’Modern’ in the sense of community, sustainability, family, and most of all, beer. Specifically ale. Have you participated in our American beer revolution? You’ve certainly heard of it. It’s been a cavalcade of beer, falling over itself trying to get noticed. Perhaps that was the ‘90s. The ‘10s? Much good beer, lots of bad beer, and very few great American beers. Look where we sit now! Grocery stores with aisles devoted to beer. 22′s as far as the eye can see. 750′s even. The wild west days of the microbrewery era are now memories. Breweries are grown up or growing with shoes to fill. Brewers are moving about restlessly or talking endlessly or quietly brewing. Our beer is in its adolescence and fatherless, but not without ambition.

These are the words of a man who stands simultaneously at the center and the precipice of the craft brewing industry. Because while some would argue it is an industrial society, some brewers like Arney still view it as a partially unchartered frontier.
Oh yeah, he continued on in the blog post—and all the early posts laid out his vision for being the “American Orval” in that he was going to only brew one beer (specifically ale) called Sahalie and do it damn well—to mention one casual yet salient matter. “This is not a farmhouse brewery. This is a mountain brewery.”
Paul’s blog is tangential but passionate. Perhaps the same can be said of his beers. After all, his one-beer-style concept evolved into six brands. One of them, Spencer, is Sahalie Ale with the addition of wild black currants picked from the river that runs alongside the mountain brewery.
By converting his garage into the brewery, he’s saving rent money on an industrial space down in town, but the side statement is that he’s not doing what the other eleven breweries in Bend are doing. He’s happily a part of the community, but proudly removed from it. He’s a jovial recluse.
So here he is, ten miles and a world away from Deschutes, the fifth largest craft brewery (11th biggest overall in the US), surrounded by about two dozen oak barrels used for aging his beers, each emblazoned with names of departed relatives including Paul and Pauline, his grandparents. The barrel named Staci isn’t used for gentle maturation, it’s actually his mash tun named for his wife. I stick my nose into one upright barrel marked La Gordita brimming with foam and it smells like a cocktail made with peach and watermelon flavored Jolly Ranchers. The contents are on their way to becoming a beer called El Cuatro aged in brandy barrels, completely unhopped, yet fermented with a blend of the Ale Apothecary’s microflora from Oregon-cultivated Wyeast yeasts, a pair of Brettanomyces strains, and whatever floats in on the winds via the windows Paul leaves open during fermentation.
I’m handed a glass of a beer called La Tache. It’s 8% alcohol but tastes like only half that potent. Paul credits a long, slow fermentation, which doesn’t produce fusel alcohols like other stronger beers do and in turn are only enjoyable once the booziness burns off. He refers to La Tache as a table beer, a sort of Northwest Berliner Weisse. It tastes light and lightly tart. It’s pretty awesome.
There’s know-how and applied science in these beers, but there’s plenty of Mother Nature’s imagination as well.
“Iwant my kids to see me follow my dreams” Arney said, referring to his son Spencer, 7, and daughter Sahalie, 4. Like the river water and the spontaneous metabolizing critters, even when not seen they can be heard or just sensed running wild. And since Paul “can’t pay the bills writing a novel or poetry,” he concluded that making ales that are entirely influenced by history (and biochemistry and botany) would be both “art-driven” and “liberating,” so he might as well make a go of it brewing what he does best.