Keep you guard up, there is a new brewery announced nearly every week in Oregon and De Garde Brewing is one of the more exciting new developments. While the flood of new breweries in Portland seems to have mostly subsided, the spillover effect is causing more and more tiny craft and nano breweries to open in every small town in the state. One of the most interesting new brewers comes in the form of Trevor Rogers (formerly of Pelican Brewery) and partner Linsey Hamacher’s new 7bbl brewery located outside their home in Tillamook that will specialize in spontaneously fermented, wine-influenced beers made to cellar. They are taking the local approach in trying to capture the native terroir of the Oregon coast and all the bugs the ocean brings in on the breeze.

“Our location in Tillamook recieves a predominant coastal breeze, as opposed to coming from inland (fortunate not just because of the occasional ‘ripeness’ of the aroma to the east of us, but also because we suspect that aroma carries some less than desireable microbiological ramifications)” says co-owner Head Brewer Trevor Rogers.
De Garde Brewing, meaning “to guard,” is the latest opening in Oregon to take on farmhouse style ales in all their rustic glory.“To us, our name means to hold sacred, to protect our passions and tradition. Likewise, with most of our product intended to be capable of evolution and cellarability, we hope that some people will cherish and keep or tightly guard some to share and enjoy over time.” 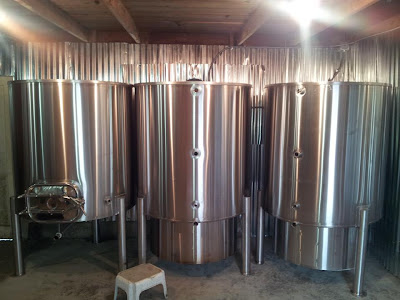 Not all of De Garde’s opening lineup of beers are as precious as the spontaneously fermented Berliner-Weisse. For instance, the brewery will also make crowd pleasers like a super hopped-up American Pale Ale with a focus on the hot Citra hop variety. Other beers in the initial release schedule are a bourbon barrel-aged strong dark sour/wild ale and a gin barrel-aged take on NW Lambic style. And, if Trevor has his druthers, the Berliner will be bottled in a classic 64oz container for hopefully around $10 and become a semi regular offering. Seasonals will be all over the board in terms of style.

“We do like variety. You can expect that most of our brew will see some time in oak (other than American style hoppy brews) and a whole lot is barrel fermented.” 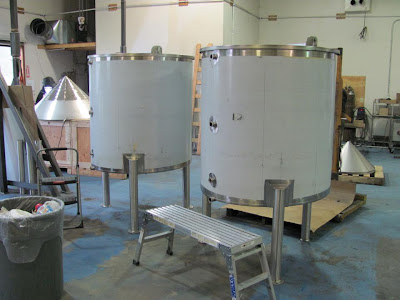 De Garde Brewing is all about the barrels, with much of that influence coming from Trevor and Linsey’s love of wine and enjoying a bottle at the peak of its flavor.“We want to create product that isn’t a quick fix, but one that is an evolving and growing experience, though has an immediate hedonistic potential.” This love of vino has inspired them to work with many of their favorite wineries in Oregon, some well known and others hidden gems. In this tradition they plan a series of single varietal and single vineyard fruited lambics using grapes from their favorite vineyards’ harvests. “This one has us excited to pull together our passions into something hopefully greater than the sum of its parts and truly worthy of our name.” 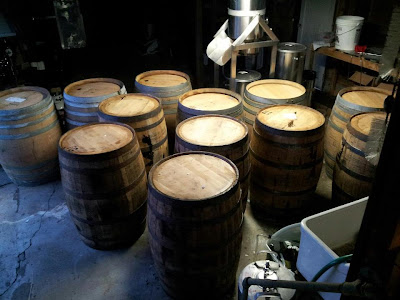 De Garde Brewing is one of a growing number of breweries trying their hand at spontaneous fermentation, which is the process of cooling your wort (unfermented beer) in typically wide shallow vessels while allowing wild yeasts and bacteria from the open air to infect the beer, thereby bringing about a natural fermentation without pitching cultured yeast into the vessel. It’s a technique made famous in Belgium, but one that has had very little success outside of that country because of its ideal conditions of clean air and farmland. It was thought for a while that it could not be done anywhere else, but more recently Allagash in Maine has become famous for successfully launching a line of spontaneous beers, and right here in Oregon both Flat Tail and Block 15 Brewing are experimenting with it.

De Garde may be the first brewery I have heard of that will focus on spontaneous fermentation, a risky endeavour to say the least. For even if you successfully ferment this way, the flavors you will develop are unpredictable and impossible to keep consistent. Trevor tells me they have had great success with saccharomyces strains found in the sea air and are loving the flavors it produces, and have isolated both wild and saccharomyces strains for pitching. Other styles where a sour or funky flavor are not desired will be pitched with traditional isolated beer yeasts.

Keep your eye out for De Garde Brewing beers in about a month, when many Belgian and wild styles in bottles and others more desirable to be drank fresh will be found on draft.