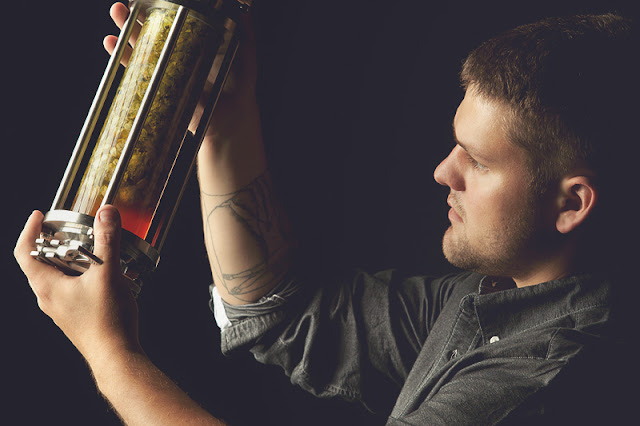 The final frontier is not space or discovering the hidden depths of our planet’s seas, but finding new and innovative ways to enjoy a beer. Apparently one of man’s (or woman’s) great obstacles in life is figuring out how to chill a beer in a short period of time. A 1st world problem, yes, but no less than 4 of the 6 new innovations in beer tech focus on it. Others focus on telling how drunk you have become, the transportation and carbonation of beer, and adding more and unique flavors to your beer. Which of these will you soon find at your local bottleshop or bar?

Chillsner
Not just for adult fun in the bedroom, the new Chillsner from the folks behind wine chiller Corkcicle have found another way to keep cool while staying hot. OK I admit it, I have thrown a bottle of beer into a freezer before only to have it explode into a hail of glass shards and slushy malt. Damn, it is a real b*tch to clean up. If you don’t happen to own one of those quick wine chillers, then this may be just the ticket. Basically it’s an aluminum rod filled with a thermal gel; you store it in your freezer until it’s ready to use, then pop the top on the bottle and place it inside. Better than just quick chilling, you leave the rod in to keep it icy cold, and it even has a drinking spout so that you don’t have to remove the rod until you’re finished. Just make sure to wash that thing off between your bedroom and your beer, or you may have accidentally created a new Breakside beer.
The Chillsner is supposed to be released by Corckcicle in May.http://corkcicle.com/

Breathometer
Look, I am not saying you have a drinking problem, I am just suggesting that investing in the world’s first smartphone breathalyzer would be a smart move and help you slow down a little. The startup tech company has already received boatloads of press, from Forbes to CNET, and a still ongoing IndieGoGo campaign for fundraising is over double its goal and still going. In fac,t if you sign up and give now via the IndieGoGo campaign, you can have one in hand by this summer. Just remember, alcohol takes an hour or more to really get into your bloodstream, so keep in mind what’s accurate one hour may not be the next. I have requested a pre-release prototype for review, so with any luck I will report back on this device soon. http://www.breathometer.com/ 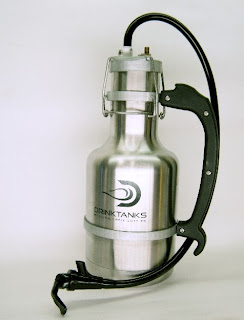 Drink Tank
One of the hottest trends in craft beer is changing the way brewers and retailers think about selling their beer in growlers. In Oregon we have had them for a long time, while other states and countries are making them legal. More bars and grocery stores are realizing there is a whole new market for folks who simply want to stop in and fill up a growler to take home. More and more you will see businesses built on this concept, with a slew of Growler Station based businesses opening in Oregon in 2013. It’s the natural evolution of the bottleshop.

The Drink Tank and the Zythos Project’s Brauler are the most advanced and really the only two products I have seen that added anything new and worthy of note to growlers. Both are stainless steel and hold carbonation and pressure well; both have a wide mouth for easier filling, less foam, and improved visibility; and both have developed caps that will allow you to pressurize the beer. The main difference is that the Drink Tank is double walled (not sure if Brauler is or not), and that keeps the beer even colder and prevents any outside condensation. They both have special lids that will allow you to inject gas into to keep carbonation and head pressure, but the Brauler’s even offers its own cobra keg tap with hose. The Brauler is available for purchase now, but the special cap is not yet available. The Drink Tank recently received full funding but has not yet launched; however, you can pre-order and still back the project on Kickstarter here:http://www.kickstarter.com/projects/584321487/the-perfect-beer-drinking-vessel-and-private-keg 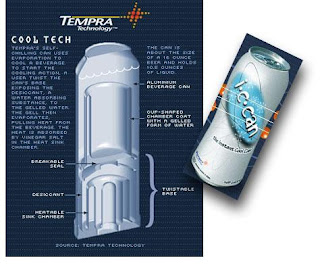 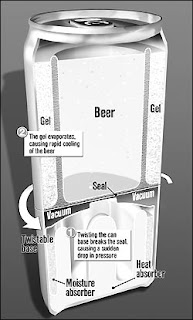 The I.C. Can
This self cooling can has been in development for some time and has previously been leaked, but appears to be closer to reality than ever after an appearance at SXSW last week.The I.C.Can’s makers, Tempra Technology and Crown Holdings, claim that the can is a 100% safe and environmentally friendly development that cools using simple water evaporation for self-refrigeration. They say it is proven to lower the temp by a minimum of 30° F (16.7° C) in just three minutes.

As seen in the diagrams above, a large portion of the can is taken up by the vacuum heat pump tech on the bottom, as well as a thin gel insulation along the sides of the can that hold the beer. You might be wondering how large it is? The total can size is 500ml and it holds actually 300ml of liquid; apparently the increase of cost is very minimal. Who will be the first to mass market this tech?
Call(941) 739-8900 for more info. http://www.tempratech.com/chill1.html 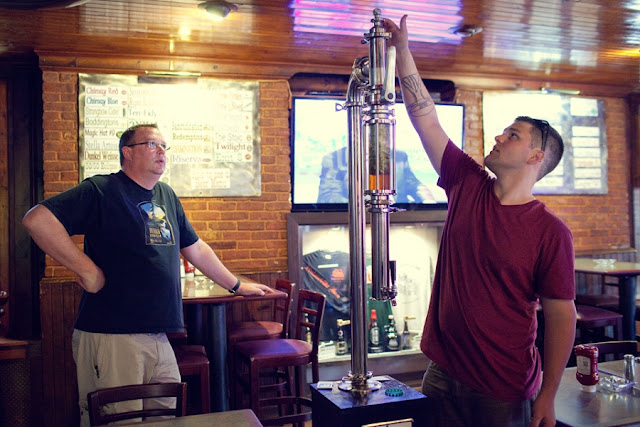 Fusion Tower
Ever since Sam Calagione invented the Randall, people have been obsessed with finding new ways to infuse their beer with more hops or other unique ingredients. The Fusion Tower is the latest development and may be the best way developed so far to do this inline between the tap and the pint. By connecting this deceivingly simple fancy piece of fitting to your draft system, you can add anything from hops tomalts, spices, fruits, and oak chips. What makes this better than a Randall or a Hop Rocket is that it supposedly has a new method to decrease foaming. If you have ever used an aforementioned device for infusing, you know that the beer is jostled and agitated so much it comes out a foamy mess and a loss of carbonation is noticeable. According to the Fusion Tower company website, “The Fusion Tower will consistently pour perfect pints while delivering beer that is fully carbonated withnegligibletemperature loss.” If you’re not sure if this is just a big gimmick, these guys are confident enough to let you rent the Fusion Tower to try it out for yourself. http://fusiontower.com/