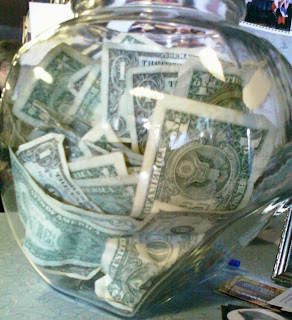 In honor of the upcoming April 15 tax deadline, let me take a swing at corporate welfare. If the amount of taxes you paid — or are about to pay — for 2012 is causing you some pain, consider that your taxes might be lower except for the many techniques large corporations use to either shelter profits from taxes, lobby for loopholes, or, increasingly, get special exceptions on state and local taxes whenever they expand their business operations.

What does this have to do with beer? Well, 2012 gave us two somewhat related examples of Beer Corporate Welfare, as well as two counterexamples of expanding breweries that did not to ask taxpayers to foot any part of the bill for their expansions. Luckily for us, the outspoken founder of one of the latter breweries has not minced words in criticizing his mooching colleagues.

The Beer Welfare Queens in this story are New Belgium and Sierra Nevada, who both happen to be opening large production breweries in the Asheville, North Carolina area, to more efficiently serve East Coast markets. NB and SN — who were going to open breweries in the east no matter what — were the recipients of millions of dollars in incentives from state and local governments in North Carolina (details below). In the other corner, the Proudly Self-Made Breweries are Lagunitas — whose new brewery in Chicago didn’t ask for or receive any government subsidies — and Colorado canning pioneer Oskar Blues, who set up their own eastern outpost not far from Asheville without any public assistance.

Lagunitas founder Tony Magee has been vocal in pointing out how unreasonable and anti-capitalistic such tax giveaways are, especially in this time of tight government budgets. Here’s what he had to say about it in a podcast interview last year:

You got to know that [Sierra Nevada] went deeply into the public trough to fund the brewing operation… If anyone reads the papers, it is a pretty dry trough. So what’s a f&^$*#@ rich business like those doing that for rather than just bearing their own weight and bringing value to a community? [Source: BeerPulse.com.]

A few weeks later Magee shared similar thoughts on Twitter (by the way, Twitter is itself a corporate charity case):

The Buncombe County Board of Commissioners will consider almost $9 million in staggered incentive payments to New Belgium Brewing. This is your tax money being diverted to a wealthy company… No incentives for us in [Chicago]. In my mind this is how capitalism works-the government stays out and risk takers take risks. Any brewer that big has a bank. We are not socialists. [Source: BeerPulse.com again, thanks!]

Wow! How’s that for piss and vinegar? Go Tony! In an interview right here on The New School, Magee pointed out that Lagunitas didn’t just forget to ask for handouts, they turned them down:

Business is as business does, but we all also make the world that we want to live in through the decisions we make… For my part, Lagunitas was shown all sorts of incentive money for the Chicago brewery, but I declined it all on its face.

If the $9 Mil for New Belgium that Magee mentioned sounds like a lot to you, maybe you’ll be interested to find that New Belgium actually snarfed up $13 million in total from “the public trough”, as explained in this post on the blog Ashvegas. As far as I can tell, Sierra Nevada wasn’t quite as gluttonous, and only needed a little under $5 million to set up beer camp in North Carolina:

You know who should be really pissed about all that money? The small brewers who built Asheville up into Beer City USA. You’d think those local brewers could have found a use for $18,000,000 if their elected officials had seen it fit to bestow it on them, instead of on some much bigger companies from out of state–companies that will now be competing in area markets with beer made on a much larger economy of scale. To some extent, a rising tide lifts all boats, but a tide designed for a couple of big boats might swamp a bunch of beautiful little handmade vessels.

Finally, what’s with all these breweries setting up shop in North Carolina, which has the ninth-highest excise tax on beer in the nation? Hmm… I guess taxes don’t stifle business as much as the “job-killing taxes” crowd would have you believe. I do think that production-side excise taxes are not the best way to fund our governments, but it does call into question the necessity of offering a special deal to any corporation with a sob story, especially in North Carolina, which by one estimate already has the lowest corporate tax burden of all 50 states (or in Oregon, which is tied for the 2nd lowest in that same study).

These beer subsidies are a drop in the bucket of the current trend of granting tax breaks to every company that bats their eyelashes at a new location or threatens to storm out of an existing one. For further reading on that subject, I highly recommend the recent New York Times series of articles about the dubious benefits of such tax deals. In particular, the NYT has a fascinating interactive map that lets you compare sweetheart deals by state or by company. One interesting factoid from the map: North Carolina hasn’t been as promiscuous with its tax giveaways as Oregon has: Oregon puts out to the tune of $226 per taxpayer, or 12% of its annual budget, while NC only unbuttons 3% of its budget, $69 per capita.

New Belgium’s CEO sent a letter to BeerPulse justifying the tax breaks on the basis of future tax revenues for the area, and of course the promise of new jobs. But the New York Times articles point out that there isn’t any clear evidence that the future benefits turn out as promised, or that special tax deals make sense for projects that were going to happen somewhere anyway. Three cheers for good corporate citizens like Lagunitas and Oskar Blues who pay their own way, and let’s hope for an end to egregious corporate welfare of the Beer City USA variety.