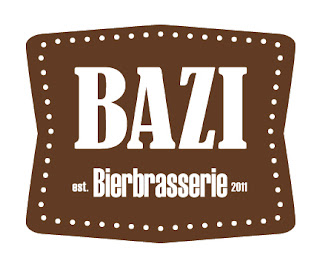 Portland’s only strictly Belgian/European-inspired beer bar–Bazi Bierbrasserieis celebrating its 2nd anniversary this Sunday, May 26, from 4-10 PMand Monday, May 27 at 5 PM with the help of Lompoc Brewing. It seems like just the other dayI was reporting about an exciting new Belgian bier bar that was soon to open in my hood. Here are the details of the festivities taking place and word on a special anniversary beer. 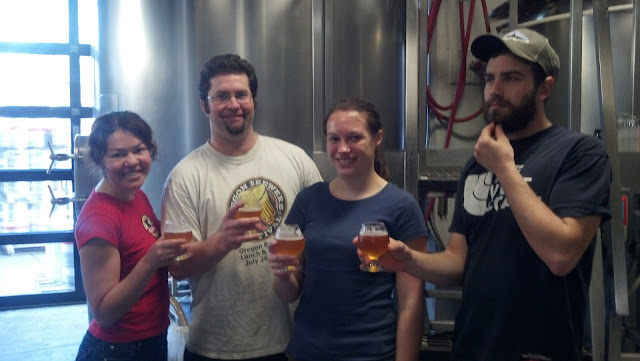 (PHOTO: Left to right: Hilda of Bazi, Bryan, Irena and Grant of Lompoc Brewing)
Fill My Fridge
Sunday, May 26 from 4-10 PM
This is the official release party for Bazi’s recently expanded license, which now includes to-go bottles and growler fills. Double Mountain’s limited edition Four Horsemen Series will be available for purchase as a 4-pack while supplies last. So get there early, check out the growing bottle list of Trappist beers as well as local favorites, and Fill Your Fridge!
2nd Year Toast Beer and Cake Pairing
Monday, May 27 at 5 PM
Bazi proprietress, Hilda Stevens, spent the last few months brewing up a recipe for a saison with Bryan Kielty of Lompoc Brewing. The result of the Bazi and Lompoc collaboration is the Forbidden Fruit saison. Brewed in a 15 barrel system with 64 gallons of black currant and a secret Belgian yeast, the saison has a delightful tart finish.

“We’re taking the beer a step further by adding a third partner to this collaboration,” says Stevens. Some of the beer will be preserved in French barrels used by De Ponte Cellars, located in the Dundee Hills, in the making of their Pinot Noir. “I’ve been a fan of De Ponte Cellars wines for years and personal friends of the family. It was Bryan’s idea to age some of the beer after we first tasted it, so involving De Ponte Cellars was a natural fit. I’m very excited to see what aging does to the flavor profile of this beer,” concluded Stevens.

Bazi will be pairing the Forbidden Fruit Saison with Jaciva’s chocolate cake, a local award-winning bakery in the Hawthorne area where Bazi is located. The pairing is complimentary until the last piece of cake is claimed. For more information about these and other events call503-234-8888or visitwww.bazipdx.com.