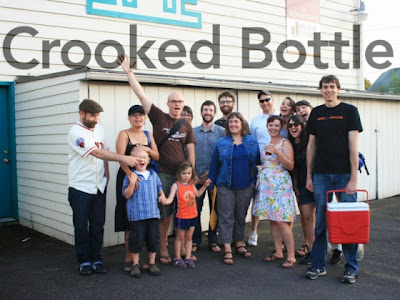 I have been loosely monitoring a handful of beer-related Kickstarter funding attempts over the last few weeks, but I would not expect one of those attempting to be funded to approach their own campaign the same way. It turns out that the folks behind Crooked Bottle, the prospective new brewery project from the folks behind Homebrew Exchange, were away from the computer when their funding bid failed, ending up just $243 short of its $25,600 goal.
This is astounding, especially since last I checked the project didn’t seem to be even close and owner Aaron Fabbri admitted as much in his commenting backlash against Bill Night’s “No, I Won’t Kickstart Your Lamebrained Beer Project.”Business Insider brings up the point that surely an owner, a friend, or someone could have ponied up the last $243 rather than losing $25,357 (minus Kickstarter’s cut) they would have received. There are possible legitimate reasons for not making the cut, but in the comments of the Business Insider Aaron Fabbri calls us “lazy bloggers and online commenters” and “a holes” while stating that no one on the team was on their laptop at the time of the campaign’s end. Who is being lazy now? Believe it or not, Aaron Fabbri and the Homebrew Exchange crew, but no one wishes you ill will or for your campaign to fail. I for one am excited every time I hear about a new brewery opening–the more the merrier. Bill Night even told me he kicked in a pledge to the fund. It’s heartbreaking to learn the project was so close to its goal, and I can’t imagine the frustration you must be feeling, but blaming online commenters and the media for your problems instead of reaching out to them for support may not be the best solution to the problem.