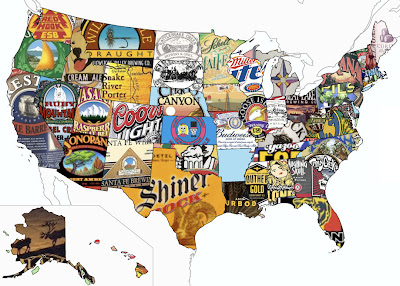 If you’re not partying with me at The New School & Brewvana’s Wine Country BEER Tour on Saturday or The Mighty Mites session beer feston Sunday this weekend, then you should definitely be at the Bend Brewfest. Still, if you’re not so lucky as to attend that great beer fest, then you may miss the article I wrote for the fest program, so I have reposted it here. I was asked by the great organizers there for a piece on the state of the industry–here it is in full:

By all accounts the craft beer industry is booming. Sales of craft beer rose to 1.3 million barrels brewed just in Oregon in 2012, and the number of breweries in the country soared to an all time high–2,416, with new brewery openings showing no signs of slowing down. Bend, along with Portland, has long been a leader of this growing industry in both Oregon and the nation, and as the number of new breweries opening up continue to surge, so does the chatter of the naysayers. Years ago critics inPortland and Bend began discussing an oversaturation of breweries. It has turned out that the market can and does support the continual addition of new breweries and probably will for some time into the future, if we handle ourselves right.

However, like any fledgling industry, some craft brewers are having growing pains. New problems are cropping up to impede growth and change the sometimes lackadaisical approach to the industry that some startups have. First and foremost, being a craft brewer is fun, but it is also hard work, and the industry is transitioning from one where all a startup brewer had to worry about was the quality of their beer to a more grown-up industry that requires the navigation of distributors, branding, lawsuits, and lawyers.

Bend paints a picture of a successful microcosm for this new frontier of beer. Bend is home to more breweries than anyone could imagine would exist in such a small city, and has thus far avoided the pitfalls of a maturing industry. Beer was once such a staple to some cultures that a dinner table–or breakfast, for that matter–would not be set without a glass. So, while I believe no bubble is about to burst, there are inevitable growing pains. The first sign is an increasing number of legal battles over names and trademarks. Brewers are being forced to become more sophisticated in business and branding and, unfortunately, lawyers sometimes get involved.

The next sign is a shrinking amount of shelf space at local supermarkets. Many stores can and will continue to expand the shelf space for craft beer, even if it requires eating into macro beer’s slots. Still, this can only go so far, and some brewers might find themselves left out, which is why I believe the brewpub model is the most sustainable. A brewpub is both a restaurant and a bar, and you cannot have too many of either of those. Like businesses in any industry, some will fail, but many will succeed.

Third, we need to stop fighting among ourselves about relatively irrelevant issues like what constitutes a “craft brewer” and what is a faux or “crafty” brewer, a la MolsonCoors-owned Blue Moon. The point is: who cares as long as a brewery is making good beer. Let’s worry about our own businesses before concerning ourselves what others are doing. Craft brewing’s success depends on how it matures as a whole. Will new brewers continue to walk into this industry with a chip ontheir shoulders ready to fight it out with the macrobrewers or each other, or will they do their best to represent the art form as compatriots and collaborators? The most successful craft brewers havecome so far in large part because they didn’t concern themselves with what others were doing; they just wanted to enjoy good beer with friends. As Bay Area artist Tom Marioni says, “the highest form of art is drinking beer with friends.” Let’s keep that in mind and toast to another year of beer.