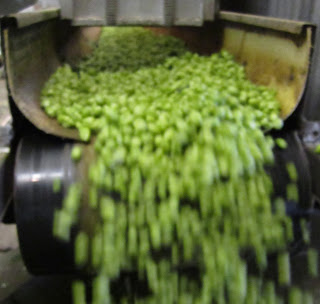 It’s that wonderful time of year when the unique taste of fresh-hop beers is available. Fresh-hop beers–flavored with hops that have not been dried in a kiln for preservation–have a unique range of flavors with which a lot of us have become a little obsessed. It’s not for everyone–the undried hops can contribute a vegetal flavor that tastes off to some people–but the popularity of theses beers has been growing in leaps and bounds the last few years.

My rant today is to protest the use of the term “wet hop” to describe these beers when “fresh hop” makes more sense, and leaves less room for misunderstanding. I’ve been complaining about this for a few years: here are some previous rants from 2012, 2011, and 2010. I thought I might give it a rest this year, but as the season has ramped up, it seems like the idiotic phrase “wet hop” is more prevalent this year than ever, so once again I must stamp my little feet.

Fresh hops are not wet, any more than any other fresh herb is wet. You could squeeze a hop cone all day and not get a drop of water out of it. If you haven’t dried the hop, anyone would recognize it as fresh and not dried. Why muddy the waters by calling it “wet?” You might turn the tables on me and say, “what’s the harm in calling fresh hop beers “wet hop beers?”If everyone knows that “wet hop” means “fresh hop,” what’s the problem? There are, in fact, several problems with it.

First and foremost, it is misleading. The very existence of the phrase “wet hop” allows certain people to make a distinction between “wet hop” and “fresh hop.” Here in the Pacific Northwest, beers brewed with undried hops have always been called “Fresh Hop Beers.” If you say you’re serving a fresh hop beer, people understand that to mean “this beer has been flavored with unkilned hops.” That’s not at all to say that there are absolutely no dried hops in fresh hop beers–it’s perfectly reasonable to bitter a beer with dried hops and add fresh hops for aroma, though some die-hards make fresh hop beer with only unkilned hops. But I was scandalized a few years ago to find out that some of the beers served during this season as “fresh hop beers” did not have any unkilned hops in them. WTF? How can you call it a fresh hop beer? And the reply was always, “It’s not a wet hop beer, it’s a beer made with the freshest hops of the year.” 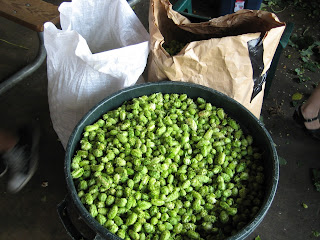 When I say that it’s misleading to say your fresh hop beer contains only dried hops, it’s not just a matter of misleading the uninitiated. In 2010, when I first became aware that people were making all-dried fresh hop ales, I asked a few brewers what they thought of fresh hop beers that had no unkilned hops. John Harris gave me a blank look. “Who would do that?” he asked, genuinely puzzled. Other brewers had similar reactions.

Secondly, “wet” is a piece of terminology that isn’t used when talking about any other agricultural product. At the grocery store, you don’t have to ask for wet parsley or wet mint to avoid being given dried herbs, no matter how recently they might have been dried. Is there anything else you can think of where “fresh” might mean it had been dried? Tomatoes? No. Peaches? No. Lettuce, onions, pasta, fish, roses, milk? No, of course not. Think how silly it would be if someone tried to convince you that the dried figs they were selling were fresh, and that you had to ask for wet figs if you wanted undried ones.

Finally, as I noted earlier, fresh hops are certainly not wet anyway. It would make more sense to call tomatoes or peaches wet than it would to call hops wet. It brings up some silly imagery also: if you’re brewing with dry fresh hops, what about your water? Is it fresh, or wet? Did you dry hop with wet hops?

In 2010 when I became aware of the fresh hop/wet hop problem, I called out Widmer and Hopworks as a couple of local brewers making “fresh hop” beers with only dried hops. As far as I know, neither of them does that anymore, and they have both exclusively brewed honest fresh hop beers in the years since [full disclosure: I own a small number of shares of the Craft Brewers Alliance, Widmer’s parent company]. Hopworks even grows hops on its back lot for a very small batch of fresh hop beer each year, and this year went so far as to produce a slick video about the brewing team’s run to Goschie Farms to pick up fresh organic hops for a new beer called Bitchin’ Camaro (I can’t wait to try that).

I wouldn’t be doing my job if I didn’t get in a jab at Sierra Nevada. Granted, it was one of the first breweries to brew a fresh hop beer–apost in Beerpulse notes that SN’s Northern Hemisphere Harvest Ale was first brewed in 1996, meaning only Bert Grant’s Fresh Hop Ale might have been brewed earlier. SN’s Chico Estate Harvest Ale made with fresh hops from the brewery’s own farm is a mighty fine example of fresh hop beer, especially if you can catch it on tap early in the season. But Sierra Nevada is the worst offender at promoting this false wet hop/fresh hop dichotomy, first by calling the Southern Hemisphere Harvest Ale a fresh hop ale because the hops are used within two weeks of their harvest. More recently, SN has even been labeling its hoppy red winter seasonal, Celebration Ale, as a fresh hop ale. I love Celebration about as much as just about anyone does, but it’s ludicrous to call it a fresh hop ale. Why would you even need a cheap marketing ploy like that for such a fine beer that already has a huge following? It makes no sense.

So join me, dear readers, in pushing back against the forces of confusion. Don’t let anyone get away with calling dried hops “fresh,” and politely correct anyone who uses the ridiculous phrase “wet hop” when they really mean “fresh hop.”